Introduction: Tinnitus is a common reason of consult and constitutes a very incapacitating symptom. Objective tinnitus accounts for only 5% and has various etiologies. Dural Arteriovenous Fistulas (dAVFs) are an example, but they are an unusual cause.
Case report: We present one case of a male patient with 48 years followed in the Otorhinolaryngology (ORL) consult for a left pulsatile tinnitus with 3 months of evolution. The physical examination was normal; the initial basic complementary exams were normal (audiometry, impedanciometry, analytical and cerebral Computed Tomography (CT)). Given the clinical persistence, it was decided to request a brain Magnetic Resonance Imaging (MRI) that led to the suspicion of a dural arteriovenous fistula in the transverse sinus. The study was completed with an arteriography identifying a low grade dAVF at the level of the left sigmoid sinus.
Discussion: The dAVFs, although infrequent, constitutes a treatable cause of tinnitus, so the awareness must be present in the diagnostic approach of all patients with pulsatile tinnitus, especially if it is unilateral. We also carried out a review of the medical/surgical management of this pathology.

Tinnitus is a common reason of consult and constitutes a very incapacitating symptom. Objective tinnitus accounts for only 5% and has various etiologies such as traumatic, infectious, vascular, oncological, pharmacological or systemic causes. For this reason, in order to reach a correct diagnosis, it is essential to use standardized protocols in the ORL consult, without underestimating any sign, since it may be the first manifestation of a serious and potentially fatal pathology [1-3].

The most frequent causes of objective tinnitus described in literature are the arteriosclerosis of the carotid or subclavian artery and the benign intracranial hypertension; however, dural Arteriovenous Fistulas (dAVFs) are a less common cause [1-3].

The dAVFs consists of small anomalous connections/ shunts between collateral of a dural artery with the dural vein/sinus, constituting just 10%-15% of all intracranial arteriovenous malformations [4]. Most of them are idiopathic and a small percentage has associated a history of craniotomy, trauma or thrombosis of the dural sinus. They are more frequent between the 6th and 7th decade of life and in women, although men are the ones who frequently present more severe clinical manifestations [4].

The clinical presentation depends on two factors: location and pattern of venous drainage. The most frequent clinical manifestation is a pulsated synchronic tinnitus with the cardiac pulse, caused by the increased of the blood flow from the dural venous vessels. This occurs particularly when it´s located at the level of the transverse or sigmoid sinuses. On the other hand, the dAVFs located at the cavernous sinus can cause ophthalmoplegia, proptosis, chemosis, retro-orbital pain and loss of visual acuity. They can cause more severe symptoms including intracranial hemorrhage, seizures, dementia, Parkinsonism, cerebellar symptoms, lethargy, neuralgia, cranial nerve disorders or even death [5].

The two most commonly used classifications to determine the degree of severity of a dAVFs are the Borden classification [6] and the Cognard classification [7]. These are based on the venous drainage pattern (Table 1). The most severe presentations are usually observed in Borden type II, III and Cognard type IIb and IV [4-7]. However, these classifications are not useful to predict the natural course of this pathology, considering that, these lesions are dynamic and can improve spontaneously or progress. Therefore, it is essential to carry out a routine follow-up in these patients, in order to recognize changes in symptoms that can be potentially serious [4,5].

Table 1. Borden and Cognard classifications of dural arteriovenous fistulas and the probability of complications associated to each type.

We present the description of a clinical case of a unilateral pulsatile tinnitus and the review of its management.

A 48 years old patient was followed in the ENT consult for a left pulsatile tinnitus with three months of evolution and a sudden start. The patient didn’t complain about other earing symptoms and describe his tinnitus as continuous except in situations with noise and during physical activity. The physical examination was normal, and there were no audible heart murmurs or tactile fremitus. The audiometry Figure 1A, Distortion Product Otoacoustic Emissions (DPOAE) Figure 1B, impedanciometry and acumetry performed were normal. Applying our pulsatile tinnitus protocol, a series of exams were applied including thyroid function, electrocardiogram and a cerebral Computed Tomography (CT), Figure 2. A brain Magnetic Resonance Imaging (MRI), Figure 3, was petitioned, indicating a possible dural arteriovenous fistula in the transverse sinus. To complete gathering more information, an arteriography was made documenting a dural arteriovenous fistula at the level of the left sigmoid sinus affecting the middle meningeal artery, occipital and ascending pharyngeal artery draining to the left sigmoid sinus (Type 1-Borden/ Cognard classification). We also performed a Tinnitus handicap inventory (THI- (Tinnitus Handicap Inventory) score) with a result of mild (grade II) affectation. 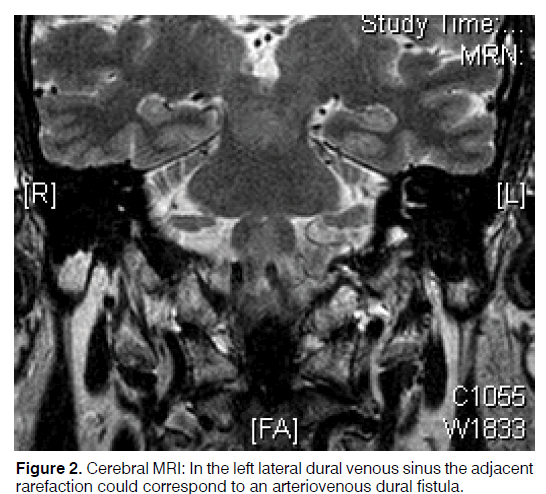 Figure 2: Cerebral MRI: In the left lateral dural venous sinus the adjacent rarefaction could correspond to an arteriovenous dural fistula. 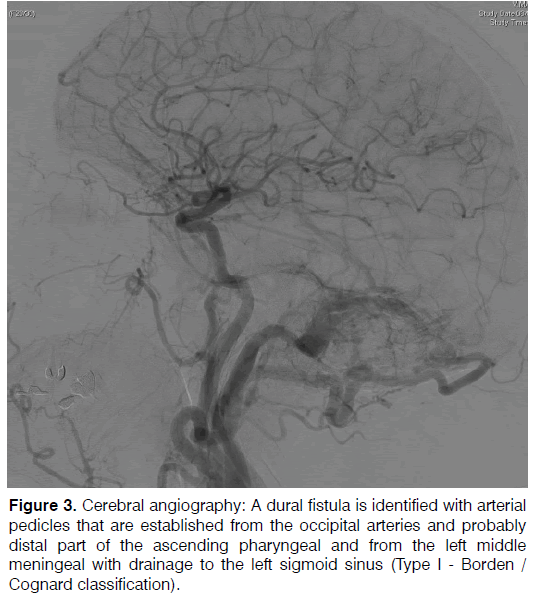 Figure 3: Cerebral angiography: A dural fistula is identified with arterial pedicles that are established from the occipital arteries and probably distal part of the ascending pharyngeal and from the left middle meningeal with drainage to the left sigmoid sinus (Type I - Borden / Cognard classification).

A conservative attitude was recommended, with semiannual appointments since the patient tolerated well symptoms (only unilateral tinnitus and grade II of THIscore) and because of his low probability of associated complications.

Looking for the etiological cause of a tinnitus constitutes a challenge that implies a multidisciplinary management.

In this case, the patient reported a pulsatile unilateral tinnitus orienting to a vascular cause, since it had synchrony with the heartbeat and increased during physical activity. He did not refer other associated symptoms; however, it was essential to investigate the presence of other symptoms that could lead to a specific etiological cause: hearing symptoms (hearing loss, sensation of otic fullness, otalgia) would guide to middle ear pathology. There are other clinical manifestations such as vertigo, headache or ophthalmological symptoms that could be related to inner ear or intracranial pathology. During the anamnesis, it is also essential to include a complete personal clinical history without forgetting to ask the use of any frequent medications [1,2].

The next step includes a complete physical examination besides the ORL explorations; which includes auscultation of the retroauricular and orbital region looking for audible murmurs or fremitus. Otoscopy findings in dAVFs are usually normal, however, the presence of a reddishtranstympanic mass would lead to the suspicion of a yugulo-tympanic glomus, an aberrant or ectopic carotid or a proximal jugular bulb. Completing the exploration with a audiometry, impedanciometry and acumetry helps to recognize the possibility of audiological involvement; if there was an affectation, would make us think in another etiological cause [1,2].

Regarding to complementary tests, 70% of the brain CT and 80% of the cerebral MRI realized in patients with dAVF shows suggestive alterations [8], which must be confirmed with more specific techniques such as a Doppler ultrasound, magnetic resonance angiography or a computed tomography angiography. However, the definitive diagnosis is given by arteriography, a procedure also performed towards a therapeutic management: the endovascular embolization. The appearance of knots in arteriography is pathognomonic of an arteriovenous malformation [4-9].

Treatment must be individualized and patients with Borden type I and I/IIa Cognard dAVFs, with controlled symptoms, should be followed periodically with imaging tests, with the purpose of recognize any worsening/ change in their clinical condition.

For the most severe and/or most symptomatic cases, endovascular embolization (arterial or venous) is the treatment of choice since it presents better results and lowers complications compared to the open technique. The last one is reserved for cases in which it´s not possible to perform it (due to failure or associated complications) [4-8].

In our patient, we have jointly decided a conservative management, since it is a low-risk fistula (Type I) with a THI-score grade II [10]. Nevertheless, the knowledge and recognition of this pathology, as happened in this patient, will allow us to identify possible complications in a more precocious way thanks to the active follow-up that we will carry out in the future.

The tinnitus caused by the AVFD is a treatable cause, so it must be present in the diagnostic approach of all patients with tinnitus. The treatment must be individualized according to the type of fistula, the symptoms, the affectation of the quality of life and the general condition of the patient.

The authors declare that they have no conflicts of interest.