Objective: To determine the incidence of complaints of hearing loss and tinnitus in a group of seniors and their access to hearing health services in the city of Curitiba. Method: 578 elderly, attending general practice clinic of two public hospitals in the city. Three questionnaires were applied: for user identification, to check for hearing loss/ tinnitus and on access to hearing health services. Results: Of the 578 subjects, 187 (31%) had hearing complaints and 112 (20%) had tinnitus; of these, 72% have never had an audiological evaluation, 12% received treatment for tinnitus without success, 16% reported having hearing aids, 14% had hearing aid devices managed by SUS; 76% of the sample showed the desire to carry out an assessment and be awarded hearing aids; 37% did not know where to seek help. Conclusion: The number of individuals with hearing complaints in the studied group is significant, as is the number of people with hearing complaints such as tinnitus who have never had a hearing examination. The access of people to public programs is deficient in this group

Access to health services and the degree of user satisfaction with such services is an important aspect within the Unified Health System (SUS) [1-3] because the information provided by these services can establish a more participatory practice and help evaluate service providers, all in order to improve the quality of care.

In addition, access to health care is considered the right of all Brazilians, which then makes this topic, involving social, political, economic, technical and organizational, a current one [4].

The term “access” is understood by health professionals to mean being made part of or entering the system [5]. Studies [6] reveal that a large portion of the population, not knowing their rights, do not properly access these services, or have a negative view of them due to the delay in treatment and lack of solutions for their health problems.

For users to have greater access to the Brazilian health system, they have to be taken care of, and from this foundation they can create a bond with the system. With specific regard to creating such a bond, people with special needs require particular attention, especially those with communication problems that hinder the exchange of information [7], for example, deafness.

In 2004, the Ministry of Health, in line with global awareness, established the National Policy for Hearing Health Care [8]. In 2008, updating concepts and redefining strategies, the National Health Policy of Persons with Disabilities was instituted, and in 2014 Ordinance 2774 was published, which, among other things, establishes the need to develop strategies to promote quality of life, education, protection and recovery of hearing health, and prevention from hearing damage under SUS [9].

It is a global consensus that hearing loss is a major public health problem, because it affects the biopsychosocial performance of the individual, interfering in educational, occupational and emotional issues. In the elderly, in particular, there is a high prevalence of hearing loss, being more significant in men. This population is no stranger to tinnitus, which can also be disabling and generate an important impact on the quality of life for people [10-14].

Taking these considerations into account, the objective of this research is to check the incidence of complaints of hearing loss and tinnitus in a group of elderly subjects, as well as to check their access to hearing care services in the city of Curitiba.

This descriptive cross-sectional study was carried out at the general practice clinics at two public hospitals located in the city of Curitiba. Data were collected from June 2013 to April 2014 and the study was approved by the Ethics Committee for Institutional Research under Protocol UTP/046/2009.

The study included 578 individuals, 321 women and 257 men. Inclusion criteria were set as the subject being 60 years of age or older and able to answer the questions of the given forms.

Participants were chosen randomly while awaiting care in the clinic. All were asked to voluntarily participate, and those who accepted were informed about the research objectives and signed a consent form.

b) a questionnaire to investigate hearing complaints such as hearing loss, tinnitus (type and pitch), dizziness, pain, and other problems.

All survey tools were applied by trained examiners who read the questions aloud and recorded the answers given by the participants.

After collection, the data were entered into spreadsheets and analyzed qualitatively.

The responses from the first tool (the identification sheet) allowed the team to characterize the sample consisting of 578 participants. The data on age and gender are presented in Table 1; data on the reasons which led to the consultation with the health service used are in Table 2; data on educational background, occupation and living situation are in Table 3. 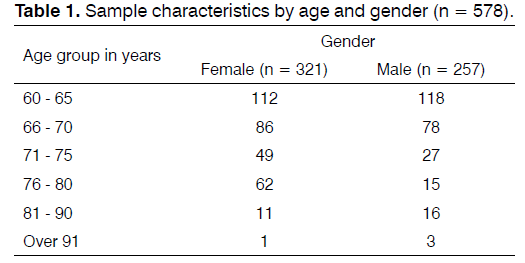 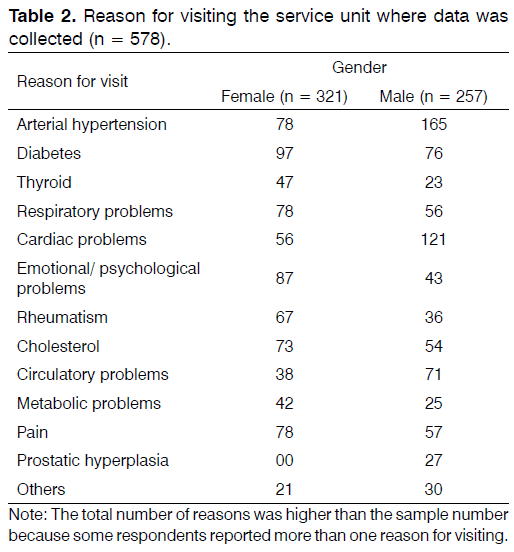 Table 2: Reason for visiting the service unit where data was collected (n = 578). 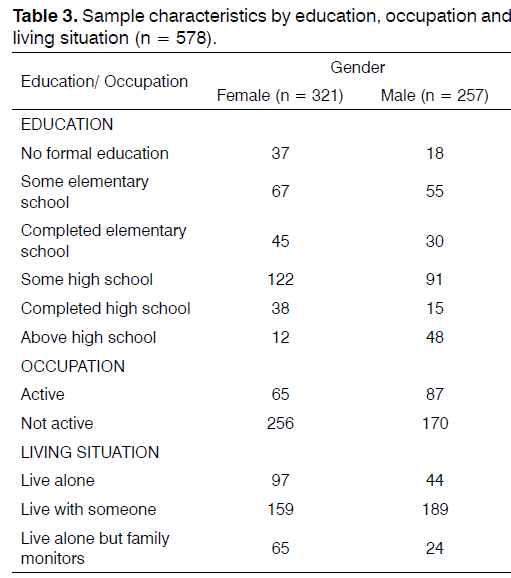 The majority of the sample was made up of people who were junior high school graduates, not actively participating in the workforce, and living with someone.

The responses obtained in the second tool (a questionnaire on hearing complaints) are shown in Table 4. 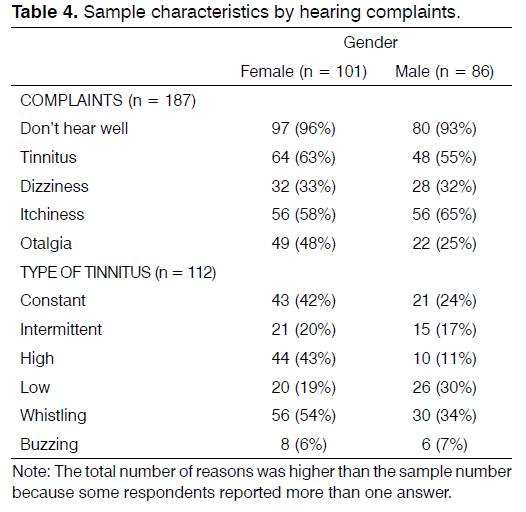 Table 4 also contains the type of tinnitus. Constant high-pitched ringing and whistling was the most common description in the sample studied.

Of the 187 respondents who reported not hearing well, 136 (72%) have never had a hearing test and 31 (16%) reported wearing or having worn hearing aids. Of these, 28 have received the device through SUS, and the rest paid for the cost on their own.

Of respondents with tinnitus, only 12% received treatment at SUS.

Of the 136 respondents who said they had hearing complaints and never underwent auditory evaluation, 104 (76%) had the desire to undergo an evaluation and, if necessary, receive a hearing aid. The others would not wear a hearing aid because of: aesthetics; cost of the device; a belief that the devices are useless, make noise. And cause irritation; a bad experience with a family member/ acquaintance who wore a hearing aid.

The responses obtained in the third tool (a questionnaire on access to hearing health service) are in Table 5. 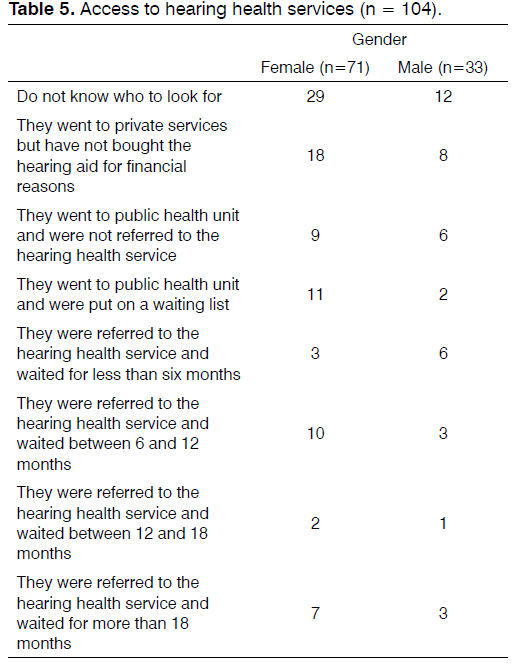 According to the Brazilian Constitution, health is a universal right and a duty of the State. With increasing life expectancy, and therefore the population aging globally, growing old in a healthy manner has been studied and has become a goal for many governments in developed and developing countries.

Monitoring the aging population is critical so that the aging process can happen in the most natural and tranquil way possible. However, it is worth noting that longevity is not synonymous with health, wellness and autonomy for a considerable percentage of the elderly. This fact has been revealed in the increased demand for health services for the elderly, especially with regard to hearing care, where data show that hearing care services also serve more elderly patients than children and youths [12].

From this starting point, this study aimed to verify the incidence of hearing complaints and tinnitus in a group of seniors as well as their access to hearing health services in the city of Curitiba. Thus it was noted that of the 578 elderly participants who responded to the surveys, the predominant age group in both sexes was 60-65 years (39%). The demand for health services in our sample occurred due to myriad health problems that typically affect the elderly

These data are consistent with the literature that describes the processes of globalization, urbanization and changing lifestyle, along with inactivity, an unhealthy diet [15], stress, and tobacco and alcohol abuse have led to increased prevalence of chronic diseases in the elderly. The most common diseases among them were high blood pressure, metabolic and osteoarthritis diseases, psychiatric disorders, chronic respiratory diseases, diabetes, kidney disease and neoplasms [15-18]. Furthermore, such diseases have been cited as prevalent among women [19], which also was confirmed in this study, which found a more significant number of women seeking care in health services.

Table 2 also shows that none of the study participants sought medical attention for hearing reasons, which, considering that 32% of the sample actually had hearing complaints, allows one to infer that this type of difficulty is valued as less important in the elderly, especially since they usually have multiple health issues.

Regarding the data about educational background, occupation and living situation, the study showed homogeneity in the subjects since most of people in the sample graduated from junior high school (80%), were not currently active in the workforce, (73%) and lived with another person (60%). A study that followed the profile of hearing health service users in Curitiba [12] corroborates these findings, showing that, despite universality be one of SUS’s principles, low-income class are more likely to seek out and benefit from the public health system [20].

The literature [21] also states that hearing loss in the elderly causes difficulty in understanding speech in noisy environments, when there are more than two interlocutors, or when the individual is not able to lip read. In this study, men and women had these complaints, which can lead to isolation and the development of depressive symptoms [22]. In Table 2, 22% complain of emotional/psychological problems being the reason for visiting health services.

Tinnitus, cited by 19% of respondents, should be investigated carefully, as it can result in depression and anxiety [13], which were two reasons that lead people to medical treatment.

Noteworthy is the fact that more than half of the sample mentioned having hearing complaints and never having sought specialized care (72%), either by ignorance of existing resources available to them, or for practical and aesthetic reasons.

With respect to these data, the literature shows that both in developing countries as well as in developed countries, it is estimated that less than one in forty people who need hearing aids have access to them [12].

Although a large proportion of participants who reported having hearing complaints and never seeking specialized care, 76% of respondents expressed a desire to undergo a hearing evaluation. The number of people who do not know where and how to acquire hearing aids was significant, which often causes a remission of tinnitus symptoms. Currently the gateway for these patients is the SUS Basic Health Unit [10], which, if well organized, has the potential to meet most of the population’s demands [6]. However, it is clear in the above data that this portion of the population, while attending Basic Health Units, is still unaware of many of the programs and benefits to which they might have access. This fact seems to reveal a lack of disclosure in SUS regarding their activities, and perhaps a lack of knowledge regarding their own professionals who work in these units in order to guide the elderly.

In addition, older people who have used this type of service through SUS complained about the lack of attention in the workers there and waiting in lines for appointments. Studies state that both waiting in lines for making appointments4 as well as a lack of empathy [5] are considered important barriers customer service for SUS, and such factors can lead to patients’ giving up on treatment.

This study showed that the number of elderly individuals with hearing complaints, especially hearing loss and tinnitus, is significant when compared with other population-based studies. The research also revealed a large number of respondents with hearing complaints who had never undergone hearing tests, and do not benefit from the use of hearing aids or treatment for tinnitus. The lack of knowledge about hearing health programs for people with disabilities is large in this population, indicating the need to carry out information campaigns in Basic Health Units within the Health Family Program and Public Hospitals.

Institution: Master’s Program Professor and PhD in Communication Disorders at the University of Tuiuti in Paraná