Introduction: Platelets are known for their key role in hemostasis and controlling the bleeding after injury. The fact thatplatelets secrete growth factors and active metabolites means that their applied use can have a positive influence in clinical situations requiring rapid healing and tissue regeneration. Objectives: Platelet Rich Plasma has been described as a promising but unproven therapy. Materials and Methods: Whole blood was undergoing one stage of centrifugation. The whole blood was then separated into three layers. One ml of the lowest layer of plasma was administered to the patient’s nose.
Results: After the third and finally the fourth therapy, 4 of 5 patients said that “their smell came back”, while the remaining one patient said that he could smell a lot but not everything. Conclusion: Based on our results, platelet rich plasma administration to the olfactory region could be a promising, last
chance therapy for complete anosmia.

Platelets are known for their key role in hemostasis and controlling the bleeding after injury. Additionally they play an important role in blood vessel neoformation due to proximity and interaction with the vascular endothelium. They are a prerequisite for angiogenesis and tissue healing due to the huge number of molecules released after activation. Platelets are small nonnucleated cells approximately 2 μm in diameter produced by megakaryocytes in the bone marrow and their main physiological role is hemostasis. The healing process is accelerated from the cellular level. Alpha granules of platelets contain various growth factors, such as plateletderived growth factor (PDGF), transforming growth factor beta (TGF-β), vascular endothelial growth factor (VEGF), insulin-like growth factor-1 (IGF-1), hepatocyte growth factor (HGF), and fibroblast growth factor (FGF), which accelerate mitosis, vasculogenesis, and differentiation. They are released when platelets are activated [1]. Activation causes the granules present in platelets to fuse to its cell membrane (also called degranulation) where the secretory proteins (e.g. PDGF, TGF-β) are transformed to a bioactive state by the addition of histones and carbohydrate side chains. Active proteins are then secreted, binding to transmembrane receptors of target cells, which include mesenchymal stem cells, osteoblasts, fibroblasts, endothelial cells and epidermal cells. These agonists bind transmembrane receptors, subsequently activating an intracellular signal protein that causes the expression of a gene sequence that directs cellular proliferation, matrix formation, osteoid production, collagen synthesis etc. thus provoking tissue repair and tissue regeneration. The fact that platelets secrete growth factors and active metabolites means that their applied use can have a positive influence in clinical situations requiring rapid healing and tissue regeneration. Their administration in fibrin clot or fibrin glue provides an adhesive support that can confine secretion to a chosen site. Additionally, the presentation of growth factors attached to platelets and/or fibrin may result in enhanced activity over recombinant proteins. Dental implant surgery with guided bone regeneration is one situation where an autologous platelet-rich clot clearly accelerates ossification after tooth extraction and/or around titanium implants [2]. The active secretion of these growth factors by platelets begins within 10 min after activation, with more than 95% of the pre-synthesized growth factors secreted within 1 hour [3].

Platelet Rich Plasma (PRP) has been described as a promising but unproven therapy. There have been anecdotal reports of significant improvement with the use of PRP. Although the PRP are mostly used in dentistry, dermatology, orthopedic and aesthetic surgery, it could be useful in otorhinolaryngology as well.

The PRP seems to be useful in cleft palate repair surgery [4], and in myringoplasty [5-7], we didn’t find reports about the usefulness of PRP in rhinology. Cho at al. used the PRF to achieve facial nerve regeneration after acute nerve injury on guinea pig and rats [8,9]. Rice used the PRP successfully in endoscopic sinus surgery [10]. We didn’t find articles about PRP treatment of anosmia. The aim of our study was to improve anosmia using PRP technique.

There is broad variability in the production of PRP by various concentrating equipment and techniques [3]. Our method contains the following steps, which started with the preparation of PRP. We collected whole blood from the patients in two 9 cc3 tubes (one for each nostril), which is anticoagulated with sodium citrate 3%. Whole blood was undergoing one stage of centrifugation (ABALASE®) at 2100 speed/RCF acceleration force for 8 minutes. Temperature during processing is crucial to prevent platelet activation (21C - 24C during centrifugation). The WB (whole blood) separated into three layers: an upper layer (plasma), an intermediate thin layer that is known as the buffy coat and that is rich in white blood cells, and a bottom layer that consists mostly of red blood cells. One ml of the lowest layer of plasma above the buffy coat layer, which is the richest in platelets, is separated without disturbing the buffy coat and is transferred into a sterile tube using a 2.5 cc3 syringe equipped with a spinal needle. Platelet activation is performed immediately by adding 0.1 cc3 CaCl2 (ENERGO®) into 1 cc3 plasma. We made detailed examination before the surgical procedure. The examination contains the detailed medical history with questionnaire, the ear, nose and throat examination and the smell test. To the smell test we used a combined test, including discrimination and identification. We have no possibilities to make the complete Sniffin’ Sticks (a combined test includes threshold, discrimination and identification), since we have no pens for threshold identification. We used short questionnaire about the symptoms score and a smell identification test before every treatment for analyzing the results. The maximum value of our total score is 10.

Our next procedure is the administration of PRP to the patient’s nose. Our first step is the local anesthesia using a solution of decongestion nasal drops with Emla® 5% and 10% Xylocaine spray in cotton, which is placed in the nose for 30 minutes. The 2nd step of the administration is the PRP injection in the olfactory area of the nose. Via 1 ml syringe with 30 G needle, PRP is injected in the olfactory area approximately every 1 cm2 with the help of a nasal endoscope.

The procedure is repeated 3 times with a 4 week interval. A 4th time is injected after 3 months. We treated 20 patients with severe anosmia. The treatment was variable based on the cause of the problem. The patients’ anosmia improved after non-specific treatments, like decongestive nasal drops, endoscopic surgery to maintain drainage of the paranasal sinuses, septoplasty, and B vitamin medical treatment. In 5 patients, the above mentioned therapies were unsuccessful. A decision was made for these patients about the application of the new method. All of the patients have informed consent before the treatment.

The inclusion criteria of the patients, who are suitable for this treatment, are the severe anosmia, which doesn’t respond for other therapies. CT scan of the paranasal sinuses must be normal.

Exclusion criteria are the severe septum deviation, allergy or asthma, chronic sinusitis or polyps, diagnosed by CT scan, blood hypertension, diabetes mellitus, and hormonal dysfunctions. The patient must be nonsmokers, non-alcoholics, and must be free from oral steroids and NSAID therapy.

The above mentioned procedure was used in five patients since 2014. The gender distribution of them was: two male and three female, their mean age was 49 years. One of them suffered from injury, the other four had virus rhinitis in the case history. All of them suffered from total anosmia which happened suddenly. Three of them had partial loss of taste. Before the PRP treatment all of them where treated with topic and local steroids, oral antihistamines, nasal wash, vitamins without results for at least 3 months. We describe in details the case history of the patient with anosmia due to frontobasal fracture (patient 5). The male was born in 1976. In 2009 he was hit with a stone, injuring his nose and forehead. He suffered nasal bone, ethmoidal and left blow-out fracture. CT scan also showed damage in the crista galli area. He underwent the surgical reconstruction of nasal bone and blow-out fracture successfully. Total smell loss complaints started from the time of the trauma. General opinion of medical consultants from several countries (Israel and Greece) was that anosmia will be permanent, due to the damage in the peripheral olfactory area. In October 2013 we suggested PRP therapy as a possible, but last chance for recovery.

The weakness of the results is the well-known fact that there are no real objective methods and specific tests for measuring the human’s smell. All of our available tests need patient’s cooperation. The pretreatment and postoperative results are based on the subjective symptoms, smell identification score and the questionnaire results. Despite these facts the results are convincing. Between the first and the second treatments all of the patients started to smell strong odors (benzene, chlorine, smoke, coffee, uncooked fish, onion, garlic). After the second therapeutic procedure they could smell more smells (orange, lemon, oregano, mint, basil etc.) even in less concentration. Two of them who had previously lost taste, could make the difference between sour, bitter, sweet and salty. After the third therapy they could differentiate the odors of every-day life. This talent became better after the fourth therapy. The quality of life became better in all patients based on a questionnaire. We have no possibilities for objective methods like measuring the odor induced EEG changes, or evoked potentials. After the third and finally the fourth therapy, 4 of 5 patients said that “their smell came back”, while the remaining one patient said that he could smell a lot but not everything. Until now none of them has lost again the recovered sensation of smell, so the results are long lasting. Our results are shown in Figure 1. 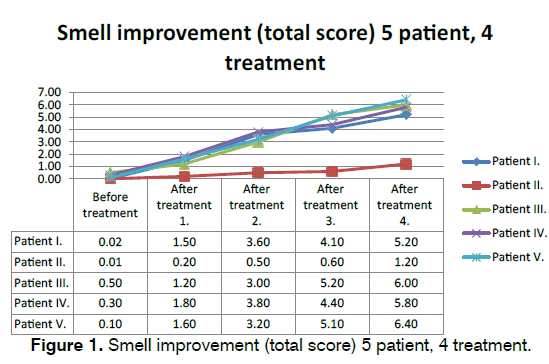 The complete loss of smell is very unpleasant feeling and life threatening problem, which is strongly, deteriorates the quality of life. Since there are no really objective methods for the measuring of smell disorders, which don’t require the patient’s cooperation (like evoked potentials in other organs), the patients’ feedback and opinion are very important. Using PRP injection to the olfactory region, all of the patients smell function showed improvement. Even though the procedure is uncomfortable, patients returned for the therapies, none of them rejected the treatment. All of the subjects were satisfied with the results. The real question is that how does the method works. Generally the regeneration ability of the sensory cells are poor, and the olfactory system cells are extremely fatigable, but based on the results we must suggest that the PRP treatment can stimulate the olfactory system. Axons of primary olfactory neurons are intimately associated with olfactory ensheathing cells (OECs) from the olfactory epithelium until the final targeting of axons within the olfactory bulb. However, little is understood about the nature and role of interactions between OECs and axons during development of the olfactory nerve pathway. The motility of these cells can stimulate cell migration strongly regulates the motility of axons growth cone activity [11]. Despite not fully knowing the exact pathomechanism; we have enough reason to assume that PRP can probably activate the olfactory region, even regenerating new receptors. Until then we find neither exact evidences for the role of PRP treatment in anosmia, nor evidence based method for improving smell disorders. Since we have only five patients, who were treated with this method, statistical analysis was not performed. The PRP administration is an invasive method, so we have ethical disapproval to placebo-controlled study. We need further investigations, but based on our preliminary results, platelet rich plasma administration to the olfactory region could be a promising, last chance therapy for complete anosmia.