Introduction: Caffeine benefits and harms in health is a very controversial subject for a scientific research.

Results: Thirty articles were found and ten were analyzed for fulfill the inclusion criteria. These ten articles were grouped and then a separated in four groups, according to the approach.

Conclusion: There is a need of further randomized and controlled studies to understand the vestibular system.

The caffeine is the most widely consumed psychoactive substance in the world. Being found in a variety of products such as coffee, tea, chocolate, soft drinks, mate, guaraná powder, slimming drugs, diuretics, stimulants, painkillers and anti-allergics [1,2].

Its action as well as the benefits and detriments to health of the consumer is a very controversial subject in the scientific literature. Studies show that caffeine improves cognitive and psychomotor performance, alertness, attention span, attention and memory, enhances visual and auditory vigilance and decreases sleepiness and fatigue [3]. At the same time, in high doses may cause tachycardia, increased gastric secretion, diuresis, increased levels of fatty acids in the plasma, cerebral vascular constriction and dilation system of the other vessels of the body [1].Body balance is guaranteed by integrating information from three systems: vestibular, visual and proprioceptive [5]. The vestibular system has three functions: to provide information about body position, correct body movements that deviate from its center of mass, and control eye movement to keep the visualmotor while the individual or the environment are in motion [6].

It is believed that because of the posterior labyrinth is a highly sensitive organ to changes in other organs and systems and substances that alter the body homeostasis, it is influenced by the use of caffeine. Clinical experience suggests that avoiding consumption is beneficial in several vestibular disorders such as Ménière’s disease and vestibular migraine therapy as well as for a reliable assessment of the vestibular system [7]. Abrupt discontinuation of its use, however, leads to the withdrawal of caffeine that is characterized by the presence of headache, fatigue, lethargy syndrome, “flu-like symptoms”, mood disorders [8].

Such symptoms appear 12-14 hours after discontinuation of caffeine consumption and reach maximum intensity from 20 to 48 hours after such interruption [9]. It is attributed to caffeine a diuretic and stimulant properties, which would exacerbate the dizziness and tinnitus [10] effect.

This is a systematic review. A search was performed in PubMed database/Medline using ‘caffeine’ associated with ‘the vestibular system’, ‘Vertigo’, ‘Vestibular function tests’, ‘caloric tests’ and ‘electronystagmography’.

Was considered as inclusion criteria, articles in English published in the last two decades and was excluded case studies and letters to the editor.

The abstracts of the articles were examined and were selected for analysis those which were correlated with descriptors. The articles analyzed were categorized into sub-groups according to their subject approach in the same perspective.

Data were tabulated with the following information: authors, year of publication, sample size, type of study, keywords and evidence level.

Thirty articles, ten were analyzed by fitting either inclusion factors were found. 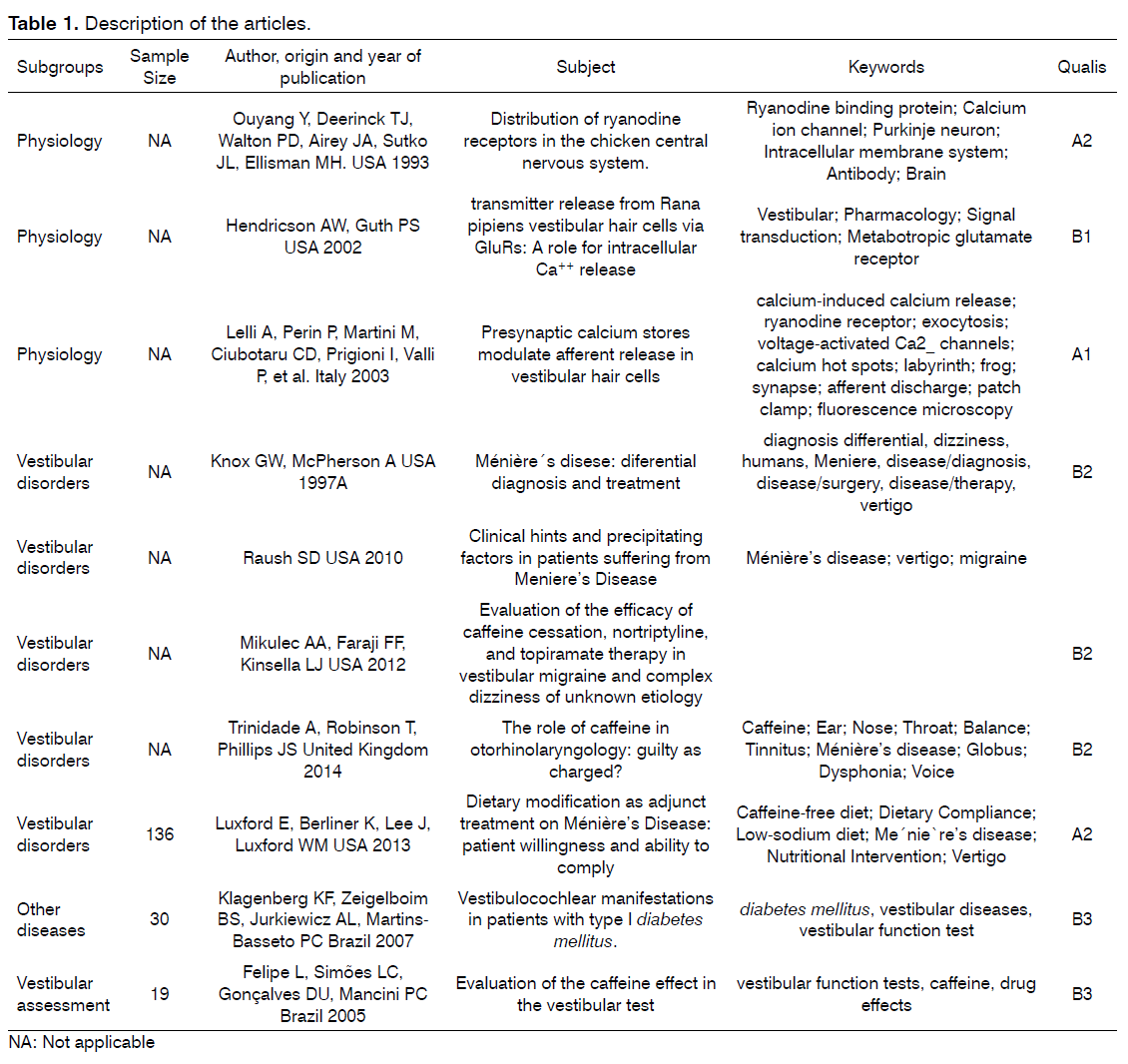 Table 1: Description of the articles.

Hendricson & Guth [14] and Lelli et al.[13] analyzed the influence of some calcium antagonists and agonists, including caffeine, the release of calcium induced calcium and this process affects the afferent synaptic transmission from the vestibular hair cells in the semicircular canals guinea pigs.

As Hendricson & Guth [14] in the hair cells of the semicircular canals afferent transduction is dependent on calcium and neurotransmitter release is dependent on a second messenger. Caffeine was used as a facilitator of calcium release induced by calcium and how this process affects the afferent synaptic transmission from the vestibular hair cells of the semicircular canals of guinea pigs.

Caffeine increases the response to calcium in some critical points of the cells, facilitating cell depolarization, thus making the cell more easily excitable. There was an increase in spontaneous action potentials and evoked by varying the angular velocity in afferent vestibular nerve fibers in the presence of this substance. It was also observed that caffeine increased the frequency of firing of excitatory postsynaptic potential but did not change its configuration suggesting that it acts at the presynaptic level [13].

Ouyang et al. [16] studied the distribution of ryanodine receptors in the central nervous system of guinea pigs looking for inferring their function based on local density and larger isoforms present in these locations. The binding of the antibodies with the ryanodine receptors increased in the presence of caffeine. These receptors were found in greater amounts in large neurons, particularly in Purkinje cells and motor nuclei, visual and vestibular system, showing its importance in these systems.

Regarding caffeine against vestibular disease, Ménière’s disease is highlighted. Knox & McPherson [11], Rauch [12], and Luxford et al.[19] suggest a restriction on the amount of salt and abstention from caffeine and alcohol as part of the therapy involved in the treatment of this disease. The controlled intake of salt would aim to reduce the frequency of vertigo, it reduces fluid retention in the body, including the inner ear.

For Rauch [12], this explanation seems unlikely and simplistic, but in fact, many patients with Ménière’s disease benefit from the restriction in salt intake. The author adds that more important than the amount of salt intake is to maintain consumption levels and proposes it to be around 2000 to 3000 mg/day. This author suggests that alcohol and caffeine cause large displacement fluid which in normal circumstances would not affect the homeostasis of the inner ear. In Ménière’s disease, however, the imbalance of the systems that regulate the production, maintenance and recycling of fluids that fill the inner ear, endolymph and perilymph causes hearing and balance remain vulnerable to external changes such as stress, deprivation sleep, dietary indiscretions including caffeine intake), hormonal changes, allergies and pressure changes.

Knox & McPherson [11] argues that the treatment of Ménière’s disease is empirical and proposes food restriction as initial treatment step, not justifying the need to abstain from caffeine.

The recommendation of a diet free of caffeine based on the professional’s experience, without scientific evidence is questioned by Luxford et al. [19]. Retrospective study, a questionnaire was carried out seeking to verify adherence to a controlled sodium and free of caffeine in patients with Ménière’s disease diet. Participants reported decreased numbers of crises and the severity of symptoms when they were following the diet, however no statistical significance was found when we analyzed only limited caffeine consumption. It is noteworthy that a smaller number of participants could restrict caffeine consumption compared the reduction of sodium intake, although it has been reported to be easier to avoid this substance. The authors suggest the need for prospective controlled studies to reduce the variables found, adding up to more conclusive results.

Many patients with vestibular migraine or vertigo of unknown etiology have variations in the diet as a trigger of the crisis and have relief of symptoms when they adopt another dietary pattern. Both consumption and abstinence from caffeine trigger the symptoms. The authors analyzed 156 medical records of patients treated between 2005 and 2009 in a clinic specializing in dizziness, in which the treatment regimen consisted in changing eating habits and, with no remission of dizziness, was initiated drug therapy. 44 patients had sufficient information to calculate the daily consumption of caffeine, which was to average 320mg/day, with values ranging between 40 and 1200mg/day [9].

Trindade et al. [17] in a systematic review sought to analyze the relationship of caffeine with various subspecialties of otolaryngology, since it comes up assigning the role of this substance causing or aggravating various ENT conditions. Such claims have conflicting anecdotal evidence. In addressing the vestibular frames, the authors distinguish the Ménière’s disease from other dizziness. Regarding dizziness in general, present a study where only the combination of promethazine and caffeine was effective for improvement of the symptom. In relation to Ménière’s disease, the effect of caffeine on the endolymphatic system is uncertain, since the current explanation is that caffeine aggravates symptoms, being a methylxanthine and favors the displacement of fluid in the inner ear. This explanation would be inconsistent to build on new studies that point to hydrops as a consequence and not a cause of the reported symptoms. The authors conclude that much of the advice given to patients regarding the use of caffeine are supported by empirical evidence, occasioning the need for more studies to support such advice.

In addition to the vestibular diseases, Klagenberg et al. [15] investigated the vestibulocochlear findings in patients with Type 1 Diabetes Mellitus, finding large percentage (60%) of vestibular disorders in these patients. Regarding the complaints and harmful eating habits, caffeine abuse was the most prevalent of them, reported by 20% of patients. The authors attribute the changes to the vestibular alteration in the homeostasis of the inner ear resulting from inherent disease complications such as neuropathy and angiopathy.

The influence of moderate doses of caffeine results in vectoelectronystagmography is tackled by Felipe et al. [18]. The authors emphasize that the sudden withdrawal of caffeine, standard procedure for performing the examination, can lead to symptoms like fatigue, anxiety, nausea, vomiting, headache and decreased concentration and may even negatively interfere with test results, leading to errors diagnoses, which could cause changes in vectoelectronystagmography stroke. For the authors, moderate intake of caffeine may be allowed, with restrictions within 6 hours before the test, which corresponds to a half - life of caffeine because modifications have been found in the results of tests performed in the presence and abstaining from caffeine. They add that the most frequent complaints during the examination held in abstaining from caffeine were anxiety (92.3%), headache (69.3%), nausea and/or vomiting (38.5%) and more severe vertigo during the examination (38.5%).

Caffeine despite being widely consumed has no mechanism of action fully elucidated. The vestibular system is dependent on the homeostasis of the organism functioning and may be influenced by substances that alter this equilibrium. Thus, while the interaction of caffeine with the posterior labyrinth is not better accounted for, the recommendations relating to the abstention of this substance for evaluation and therapy of patients with vertigo remain based on clinical experience. It is noteworthy, therefore, the need for studies with a control group to elucidate these questions aiding in driving the most effective treatment for the patient with vertigo.