Characteristics and Management of Childhood Tinnitus in a Developing Country

Objectives: Tinnitus is a commonly neglected otologic symptom among children in developing country. This study aimed at determining the prevalence, clinical characteristics, diagnosis and management of childhood tinnitus in a developing country. Method: This prospective hospital based study of patients’ age 18 years and below with complaints of tinnitus was conducted in Ear, Nose and Throat Department of Ekiti state UniversityTeaching Hospital,Ado Ekiti,Nigeria between April 2016 to March 2018. The parents/guardians/patients were briefed about the scope of the study. After getting oral consent, pretested interviewers assisted questionnaire was administered to collect data. Data obtained were collated and analyzed using SPSS software version 18.0 and was expressed in simple tables and charts. Results: Prevalence of tinnitus in this study was 6.2%. There were 56.1% males and male to female ratio was 1.5:1. Majority 55.3% had single episode of tinnitus and long duration (>3 months) was commonest form of tinnitus in 59.1%. Bilateral tinnitus was recorded in 68.9% while subjective tinnitus constituted 93.9%. Discrete tinnitus was commoner in 67.4%. Major causes of tinnitus were febrile illnesses, otitis media, noise exposure, unknown (idiopathic), earwax impaction and ototoxicity in 19.7%, 16.7%, 15.9%, 14.4%, 12.9% and 9.8% respectively. A commonest tympanometric finding was type A in 72.7% of patients. Commonly affected quality of life were anxiety, depression and attention problem in 51.5%, 43.2% and 40.2% respectively. Associated comorbid illnesses in this study were 50.8% sleeping disorders, 42.4% concentration disorders and 31.1% headache. Referrals were mainly from paediatrician in 44.7%. Prehospital treatment was mainly medication in 62.1%. All the patients were counselled (assured). Other treatments given were conservative treatment, surgery, ear syringing and hearing aids in 56.1%, 15.9%, 12.9% and 9.1% patients respectively.

Tinnitus is said to occur when there is perception of abnormal sound in the absence of external stimuli around the patients. Patients may describe the sound as buzzing, ringing, roaring, clicking, pulsations, and other noises/ sound in the ear, or inside the head [1,2]. It is a common clinical complaint among children but often neglected or overlooked in children worldwide [3]. Tinnitus in children was rarely spontaneous in nature and does not progress to adult tinnitus [4-6].

Tinnitus may also be due to a variety of pathologies such as illnesses, noise medications, ageing, allergies, dietary changes, stresses, or traumatic events. Tinnitus is often caused by pathologies related to the ear, head, and neck organ disorders like: head trauma or whiplash. Other most common causes of tinnitus is noise exposure. Noise of long or short term exposure can produce substantial and irreparable damage to the delicate inner ear outer hair cells.

Tinnitus dramatically decreases the quality of life of the affected children which resulted in social isolation and when worst it gives rise to psychological disorders [13]. Associated psychological factors include insomnia, anxiety, depression, worry, listening and attention problems [14]. Psychological effect of tinnitus on group of children with normal hearing was more than those with impaired hearing [15]. Common accompanying morbidities include sleeping and concentration disorders in learning abilities and school grades. Tinnitus also leads to headache, dizziness and vertigo [16].

Majority of the affected children developed one or more coping strategies by suppressing the tinnitus by using external sound from small transistor, radio, television set and phone. They also distracted attention from tinnitus by playing with peers or reading. Tinnitus management in paediatric usually required multidisciplinary approaches [17].

This was a prospective hospital based study of patients age 18 years and below with complaints of tinnitus. The study was conducted in ear, nose and throat department of Ekiti state university teaching hospital, Ado Ekiti, Nigeria.

This study was conducted over a period of two years during the months of April 2016 to March 2018.

The parents/guardians/patients were briefed about the scope of the study. After getting oral consent pretested interviewers assisted questionnaire was administered. Data obtained includes their biodata and age at first presentation. Other information collected includes duration, onset, nature, relieving and aggravating factors of the tinnitus. Past medical, surgical, drugs, hospitalisation, family and social history were also obtained.

This was followed by otorhinolaryngological, head and neck examination while detailed ear examination with an Otoscope was performed. Aural and periaural auscultation was also done with stethoscope to exclude bruit.

The hearing evaluations were done which included tympanometry and pure tone audiometry for frequencies ranging from 250 Hz to 8.0 kHz were indicated. The findings were documented.

In this study, numbers and codes were assigned to each variable. Data entry was done in Excel spread sheet. Data was later transformed to SPSS (Statistical Package for Social Sciences) software version 18.0. Descriptive statistics was used to present the data. Data was analyzed and was expressed as simple tables and charts.

For this study, ethical clearance was sought for and obtained from the ethical committee of the hospital.

A total of 2,123 patients were seen in ear, nose and throat clinic during the study period, 132 children presented with tinnitus and were enrolled into the study. Their age ranged between 6-18 years with a mean of 14.2 ± 3.30 SD. Prevalence of tinnitus in this study was 6.2%. Tinnitus affected all the age group in this study. The peak age group was age 16-18 years in 67 (50.8%) of patients. Figure 1 showed the age group distribution of the patients. 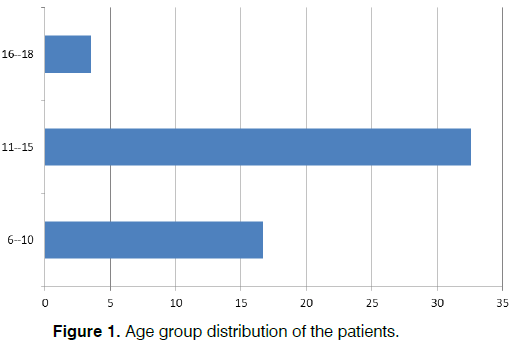 Table 3. Aetiology of tinnitus among patients. 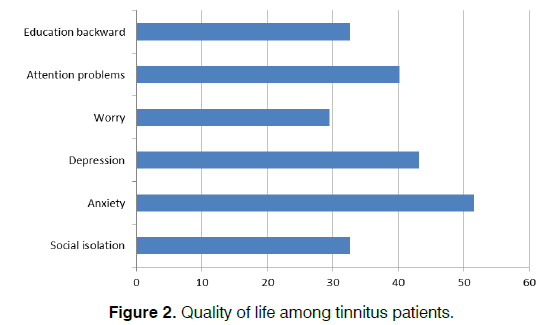 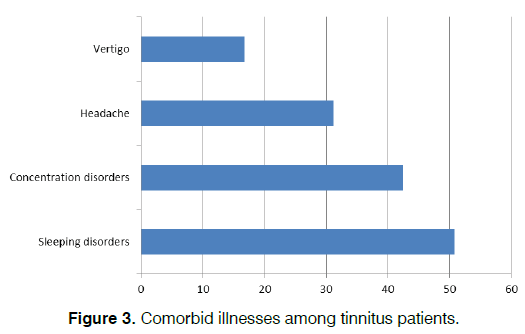 Tinnitus in children is a common otological symptom with possible varying pattern of presentation in adult and children worldwide. This study revealed a prevalence of 6.2% in the studied paediatric patients. In this study, all paediatric age group with or without hearing impairment were studied. Different studies reported varied prevalence up to 70.0% within which the prevalence in this study falls [19-21]. The observed prevalence in those studies depended on associated otological diseases and patients age group. These otologic diseases may be associated with or without hearing impairment.

There was male gender preponderance in this study which is similar to findings in other study with male gender preponderance [26]. This is contrary to other studies with female preponderance [27,28]. These findings may be due to overactive male over female. Male are more troublesome and prone to infection, trauma and excessive noise. Majority of the studied patients were urban dwellers this may be due to barriers such as geographical location of the center in the state capital, financial constraints for transportation, hospital fee with medication also sociocultural background of the parents on available alternative medicine and poor understanding of tinnitus in children [29,30]. In this study there is no significant difference in parental education levels and parental occupation status. The aetiopathogenesis and management of tinnitus are poorly understood by the parents. Only very few patients were self-reports to the department for otorhinolaryngology intervention.

Childhood tinnitus in this study was characterized by single episode, short term, bilateral, discrete, intermittent, subjective and non-pulsatile pattern to be the commonest. These features help in determining the nature of patient aetiopathogenesis, diagnosis and subsequent management. This finding is comparable to other study [31].

The duration of symptoms at presentation was mainly after 3 months in majority of the patients. Like other disorder it was first diagnosed and treated for too long by local health care services provider with referred to a specialist as the last resort. Children may take tinnitus to be normal, ignore the sensation or parents do not the complaint seriously. This report is similar to finding in other studies [32,33].

In this study, the commonly implicated aetiologic factors of tinnitus in this study were febrile illnesses, noise exposure, otitis media, idiopathic, ototoxicity, and earwax impaction. These findings were also noted in reports from previous studies [28,33]. These factors are preventable with paediatric good health practices. It therefore means that parent should be health educated on common causes of tinnitus in children in our environment.

Most of the patients presented often too late with severe consequences such as reduction in quality of life. The affected quality of life in this study includes attention problem and social isolation. These were reported in other studies [28,34].

In this study, there was no associated mortality to tinnitus in our findings. Common associated comorbid illnesses in children with tinnitus in this study were sleeping disorders, concentration disorders and headache. This is caused by persistent noise in the ear or head. These were the common reason for presentation in our department for treatment.

Majority of tinnitus patients wrongly presented other specialist. They are subsequently referred for otorhinolaryngology review and management. Only few patients were self-reports for treatment. Prior to otological presentation and due to poor understanding of treatment intervention majority seek over the counter drug. Few patients had no treatment with few patients on hearing aids. There were associated poor satisfactions to all preotological treatment such as over the counter medication and hearing aids. All patients had counseling alone or and other treatment. Childhood tinnitus is usually not distressing and some of the childhood tinnitus is selflimiting, counseling or reassuring is often beneficial as in other study [35]. Treatment of underlying causes such as earwax impaction, otitis media and patulous eustachian tube were treatment. Conditions that were not amenable to treatment due to sensorineural hearing impairment were treated with hearing aids. All patients were followed up for three months, 101 (76.5%) satisfied with tinnitus treatment, 31 (23.5%) did not satisfied with tinnitus treatment and none reported worsen tinnitus. This finding is similar to reported findings in other study [36].

In our study, childhood tinnitus is caused by preventable diseases leading to permanent otoneurological damage. At presentation, there were associated hearing impairment, comorbid illnesses and affectation of quality of life. Early diagnosis and management will prevent untoward effect.