Introduction: Evaluating quality of life for tinnitus patients has been an interest of several specialties that have seen the negative impact that the disorder has on people. Objetive: To assess and qualify tinnitus in a group of elderly hearing aid wearers.

Materials and Methods: A descriptive cross-sectional study involving 53 elderly patients with tinnitus without remission after wearing hearing aids. All subjects were submitted to: a medical evaluation, an audiological evaluation, acuphenometry, an investigation of tinnitus annoyance level and quality of life.

Results: There were 20 men and 33 women. The mean age was 72.5 years. The sample was mostly characterized by having sensorineural hearing loss (84%), moderate to moderately severe (86%) and downward sloping (82%). With respect to the description of the tinnitus sound, the most common were a hissing sound (93%) of average pitch (84%). Regarding the subjects’ perception of tinnitus, it was found that subjects had varying levels of annoyance: mild (25%), moderate (33%), severe (22%), most severe (20%). Men are more bothered by tinnitus than women. Most of the sample reported being satisfied or very satisfied with their quality of life.

Conclusion: It was possible to evaluate and qualify tinnitus in the sample. Although tinnitus is a frequent audiological symptom that interferes in the life of the elderly, in the sample it did not weigh heavily in terms of quality of life.

Growing old is a natural and irreversible human condition, and the aging population around the world has concerned authorities and professionals about how to offer the elderly the necessary care and, consequently, improve quality of life [1] .

Advancing age brings a number of factors contributing to the loss of functional capacity in the elderly. Among the most common factors is hearing loss, which can be aggravated by the presence of tinnitus [2,3] .

Tinnitus is a “phantom” auditory perception noticed only by the affected individual, making it difficult to measure. It is considered the third worst symptom for humans, surpassed only by intense and intractable pain and dizziness [4-6] . Tinnitus may cause: failures in reasoning, memory and concentration, which can harm various daily activities [7,8] and it can also cause central information processing difficulty [9] .

The use of hearing aids, in addition to minimizing the effects of hearing loss, contributes to decreased tinnitus perception [5,10,11] . However, there are patients that continue to complain about the presence of symptoms even after adapting to their hearing aid.

The objective of this study was to evaluate and qualify tinnitus in a group of elderly hearing aid wearers and determine the impact of symptoms on their quality of life.

This is a descriptive cross-sectional study using qualitative and quantitative analysis. It was approved by the Research Ethics Committee under number CEP/ UTP 27/2008 and is part of the research project titled “Description of the benefit of hearing aids in speech therapy clinic patients at UTP.”

The study was conducted in Hearing Health Clinic and accredited by the Unified Health System (SUS) in the city of Curitiba, PR, from March 2013 until October 2014.

We selected 53 subjects (33 women and 20 men) according to the following inclusion criteria: be more than 60 years of age, have hearing loss, be a hearing aid wearer for more than six months, have tinnitus.

Individuals were excluded if they were not able to respond to the survey tools for various reasons and if they had external/ middle ear disorders that would make it impossible to wear a hearing aid.

All subjects complied with the following protocol:

a) ENT assessment performed by a medical specialist, which consisted of anamnesis and clinical examination;

b) Audiological evaluation performed by a speech-language pathologist, which consisted of pure tone audiometry via air and bone conduction;

c) Acuphenometry performed by an audiologist;

d) Tinnitus Handicap Inventory (THI) questionnaire, given by the researcher during an interview;

e) Quality of Life Index (QLI), given by the researcher during an interview.

The acuphenometry [13] subjectively characterized the tinnitus sound that the patient reports.

The THI is composed of 25 questions regarding the handicap that tinnitus causes in an individual [14] . Each question has three choices: yes (4 points), sometimes (2 points) and no (zero points). The points were added to achieve an index in order to determine the degree of severity of tinnitus reported by each individual, and the points for each scale. According to the severity, the score can be: no impact (0-16), mild impact (18-36), moderate impact (38-56) and severe impact (58-100).

The QLI evaluates the quality of life according to levels of satisfaction (part 1) and importance (part 2) assigned to four domains [15] , shown in Table 1. There are 33 questions weighted by importance, and respondents attribute values in ascending scale of satisfaction and importance, ranging from 1 to 6. In this study, we applied the first part of the tool, where it asks “How much are you satisfied with… ?”

All study participants underwent prior otolaryngology consultation, and there were no alterations detected in the external or middle ear that prevented hearing aid use. In the consultation, it was identified that tinnitus had persisted even after the hearing aid initial adaptation period.

Next, all subjects underwent a clinical assessment to determine the tone thresholds and acuphenometry, with the results shown in Table 2. 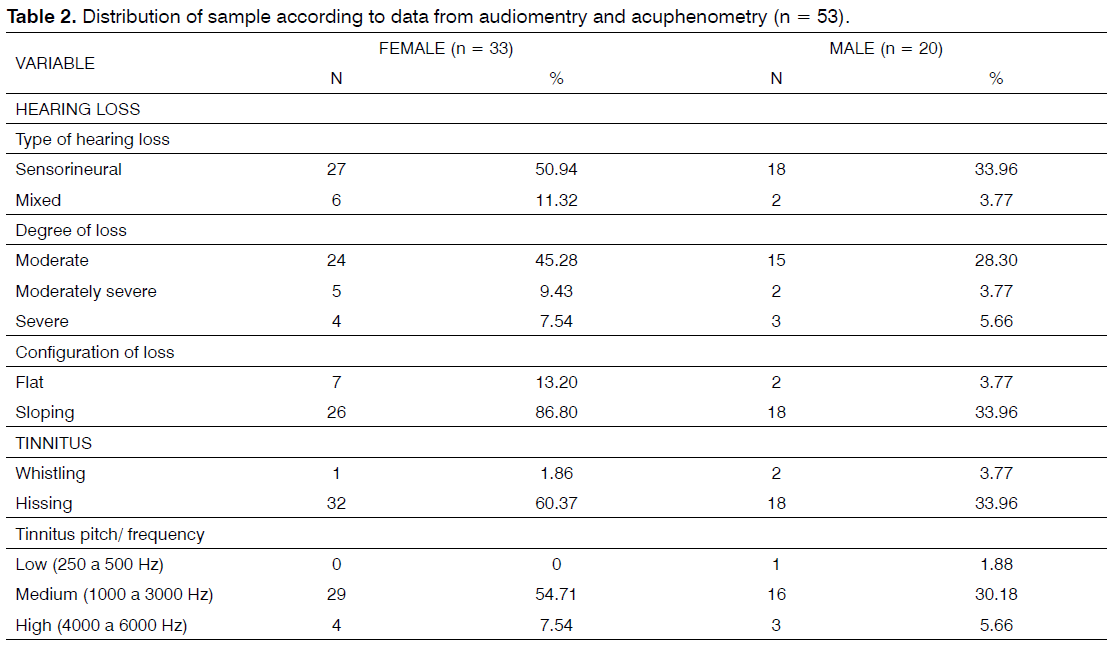 Table 2: Distribution of sample according to data from audiomentry and acuphenometry (n = 53).

Table 3: Distribution of sample according to Tinnitus Handicap Inventory, for the worst ear (n = 53). 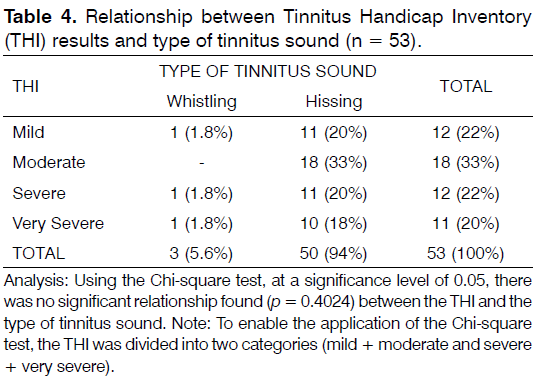 Analysis: Using the Chi-square test, at a significance level of 0.05, there was no significant relationship found (p = 0.4024) between the THI and the type of tinnitus sound. Note: To enable the application of the Chi-square test, the THI was divided into two categories (mild + moderate and severe + very severe). 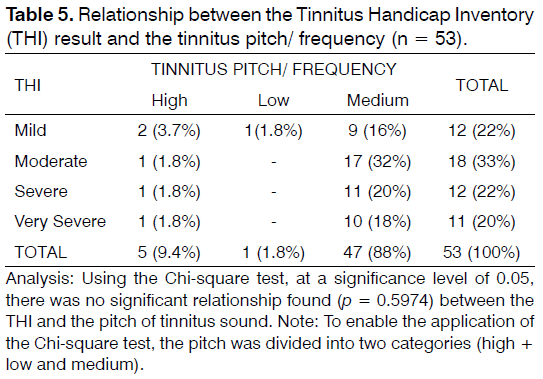 Finally, all were interviewed in order to determine how satisfied they were with their lives in the following areas: health, socioeconomic, psychological/ social, and family. The results are shown in Table 6. 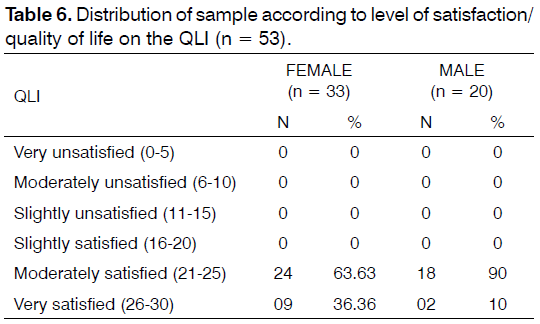 Table 6: Distribution of sample according to level of satisfaction/quality of life on the QLI (n = 53).

All survey participants were elderly subjects with hearing loss leading to presbycusis, that is, sensorineural, sloping, bilateral loss. The presence of tinnitus in this population is frequent [2] .

Because of the complaints and audiological results, all the subjects have been wearing a hearing aid for more than six months. The use of hearing aids has been reported as having a major role in the treatment of tinnitus [10,11,16] , but in this sample there was no remission of symptoms.

The description of hearing loss and the type of tinnitus is important because it allows the audiologist to adjust the hearing aid adequately to the real needs of the wearer. A less severe pitched hissing sound, related by most of the sample, is reported frequently in the elderly population [2] . According to the literature [17] , there may still be significant association between the side affected by tinnitus and the side with hearing loss.

All research subjects reported that tinnitus bothers them to some degree, but there was no significant relationship between the type and pitch of tinnitus and the degree of discomfort reported. These data corroborate the literature. According to Ferreira, Junior and Mendes [2] , tinnitus interferes with the life of the elderly; there is no correlation between the degree of hearing loss and the level of patient dissatisfaction with tinnitus. Pinto et al. [18] found no influence of gender, age and degree of hearing loss on the annoyance caused by tinnitus.

The literature explains that there is a significant relationship between tinnitus and quality life. [8] However, despite the discomfort reported on the THI, when asked about the level of satisfaction with their quality of life, respondents said they were satisfied or very satisfied, that is, they had not associated the presence of tinnitus with a reduction in the quality of life - data also found by Teixeira et al. [19] . Was it because the effects of tinnitus are variable and individual?

This fact has raised the need to perform some subjective analysis on the subject, and responses from the participants themselves was sought, allowing for some inference. For example:

• Male subject, 77 years old: “The noise in my ear bothers me… but I am very well for my age, I have younger friends who do not leave home.”

• Male subject, 68 years old: “I like the result from the hearing aid. It does not help much, I cannot hear as I did before, but I got better, it’s good.”

• Female subject, 63 years old: “This hearing aid is not the best, but it’s small and I did not want the best one because it showed. This is good enough.”

• Male subject, 71 years old: “I only use my hearing aid at home… it shows… I don’t like it to show. But when I wear it, it’s good. Just that the tinnitus is here all day. I’m not complaining, you know… But it doesn’t disturb my life.”

• Female subject, 77 years old: “I’m very satisfied with my health. My mother died long before this and full of problems… she also had tinnitus, and did not wear a hearing aid.”

• Female subject, 65 years old: “I got the hearing aid and I am very well taken care of here. The tinnitus is here, but I adjust to it.”

The described comments reveal that tinnitus is perceived by the sample, however, in some cases, is not given importance when compared with other issues, such as family history, the fact that they are in the public health system, the free hearing aid, aesthetic considerations, and age itself.

SUS users tend to believe they are receiving favors from the state or health service professionals, and thus, they overestimate the treatment to the detriment of results. Despite universality being one of the basic principles of SUS, those from lower socioeconomic classes are the ones most commonly using the services and currently benefit most from the system [20] .

Another aspect that can interfere in this sense is how the patient is received. In hearing health care, the professionals listen to specific complaints about hearing and communication problems. These professionals know that people with special needs require special attention, particularly those with hearing problems that hinder the exchange of information [21] .

It is also known that many seniors, having already seen the difficulties encountered by acquaintances and sick family members, minimize their needs in making comparisons [22] . Therefore, monitoring the aging population is essential for the process to take place in the most natural and quiet way possible [23] .

Finally, it is important to note that the QLI did not sensitize the respondents as to the question of tinnitus. This questionnaire, routinely used by nursing professionals, seeks general information about how good one’s life is [24] .

It is worth mentioning that quality of life is the perception that the individual has of his or her existence within the context of the culture and value system in which one lives. It is a broad concept that incorporates, in a complex manner, physical health, psychological state, level of dependency, and social relationships [25] . Therefore, the definition of quality of life in old age is intricate, since getting older may take different forms and have different standards.

The challenge today placed on society and individuals is to achieve an increased survival and better quality of life, so that the years lived in old age, are healthy and dignified. Growing old in a healthy way requires seniors to understand their limitations as well as the importance of being aware of how to take care of oneself.

It was possible to evaluate and qualify the tinnitus in the sample. Although tinnitus is a frequent audiological symptom that interferes in the life of the elderly, in the sample it was not given importance when mentioned with quality of life.