Introduction: A circadian rhythm is any biological process that displays an endogenous, entrainable, oscillation of about 24 hours; the rhythms driven by a circadian clock and sleep have been widely observed in plants, animals, fungi and cyanobacteria. The main aim of the current study was to translate and validate the Morningness-Eveningness Questionnaire (MEQ) to Kannada (MEQ-K). Materials and Methods: The English version of MEQ was translated to Kannada using translation-back-translation method. Further it was given to 30 native Kannada speakers for content validation. The final MEQ-Kannada version was then administered on 93 normal native Kannada speakers. Statistical analysis was carried out using SPSS 17.0 software. Statistics such as mean, standard deviation and variance and reliability statistics such as Cronbach’s alpha score as well as item-total correlation were obtained. Results: Results showed that, MEQ-K has a Cronbach’s alpha score of 0.870 which is considered to be of good reliability. It was also observed that, even after deletion of any one item from the MEQ-K, the Cronbach’s alpha score remained the same. Conclusion: From the current results it can be stated that, MEQ-K is a reliable tool that can categorize Kannada speaking population into various circadian types.

A circadian rhythm is any biological process that displays an endogenous, entrainable, oscillation of about 24 hours; the rhythms driven by a circadian clock and sleep have been widely observed in plants, animals, fungi and cyanobacteria. Scientific studies on circadian rhythms started when a curious researcher asked few tricky questions and went ahead to test them on himself.

Circadian rhythms are controlled by a master biological clock presented within the hypothalamus called the suprachiasmatic nuclei (SCN) [1]. Apart from the SCN, circadian rhythms are also controlled by many other brain areas as well as peripheral tissues such as liver [2]. There are approximately 10,000 neurons in the suprachiasmatic nuclei of the anterior hypothalamus which controls all 24-hour rhythms in the human body such as sleep-wake cycle, hormonal output or the psychological levels of performance and mood [3]. Disrupted circadian rhythms causes loss of productivity, health risks such as increased propensity for cancer, depression, sleep disturbances, gastro intestinal disorders, metabolic and cardiovascular disorders, decreased immune response, glucose intolerance, diabetes and hypertension.

Morningness-Eveningness questionnaire (Horne and Ӧstberg 1975), circadian type inventory [4], composite scale of morningness [5], Lark-Owl chronotypes indicator [6] and Munich chronotypes questionnaire [7] are the only scales available to classify the individuals into different circadian patterns. In the above mentioned scales, Morningness-Eveningness Questionnaire (MEQ) is the most commonly used scale to classify individuals into different circadian types as shown in Table 1. In spite of India being a multilingual country with a multicultural background, there are no such questionnaires available in any of the Indian languages. Population of India who can read and write English is very less with majority still depending on the regional languages for communication. Hence, administration of any English inventory becomes difficult with a possibility of getting unreliable results. Further, it is difficult for investigators to make live translation of the questionnaire to the patient every time which could be highly influenced by researcher’s language proficiency. To avoid these disadvantages, it is essential to develop and standardize the MEQ to Indian native languages and the present study focused on developing it in Kannada.

Table 1. Various circadian types based on the score.

Development of the questionnaire

The developed questionnaire was checked for internal consistency/validity with 93 participants (37 males (39.7%) and 56 females (60.2%) in the age range of 20 to 45 years (with a mean age of 29.2 years with a standard deviation of 9.8 years. The participants of the current study were literates with a minimum qualification of SSLC (i.e. secondary school education). All of them were well versed with reading and writing Kannada. All the participants were asked to read the questions carefully and take their own time in filling the questionnaire. They were also asked to assume that they are doing the activities mentioned in the questions and to come out with the answer that comes first in their mind. In order to avoid bias, participants were not allowed to interact with each other. Participants who reported of sleep disturbances, altered mental status and any psychological problems were excluded from the study.

All the filled in questionnaires were analyzed by the principle investigator and those which were incomplete were excluded from statistical analysis (3 questionnaires were excluded). The obtained data was then converted to numerical data as given in the English version of MEQ and subjected to statistical analysis using SPSS Statistics 17.0 (SPSS Inc. Chicago). Mean, variance, Cronbach’s alpha score, item-total correlation and factor analysis were carried out.

The total scores for the questionnaire rated by all the participants ranged from 18 to 85. When total points of the questionnaire were evaluated for circadian type, it was observed that MEQ-K could classify the entire population into all 5 circadian types such as definite evening, moderate evening, intermediate, moderate morning and definite morning. It was found that, out of 90 participants, 13% were categorized as definite evening type and 14% under moderate evening type. 48% of the total population falls under the category of intermediate type, 14% under moderate morning and 10% under definite morning type as illustrated in Figure 1. The overall mean of the questionnaire was 49.40 with a standard deviation of 14.32 and variance of 205.198. The scale mean and scale variance, if a single item is deleted is shown in Table 2. Reliability statistics was carried out using the same software. Statistical measures such as global alpha as well as alphas if a single item is deleted were also obtained as given in Table 3. The MEQ-K has a global alpha of 0.866 and on standardized item, a global alpha of 0.870. The scale has a higher global alpha score of 0.862 when the items 15 and 16 were deleted and a lower global alpha score of 0.853 when the items 17 and 18 were deleted. 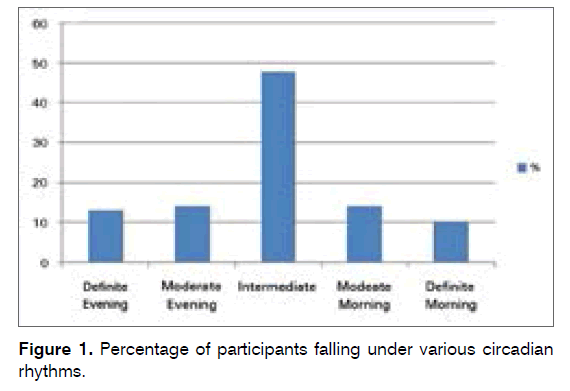 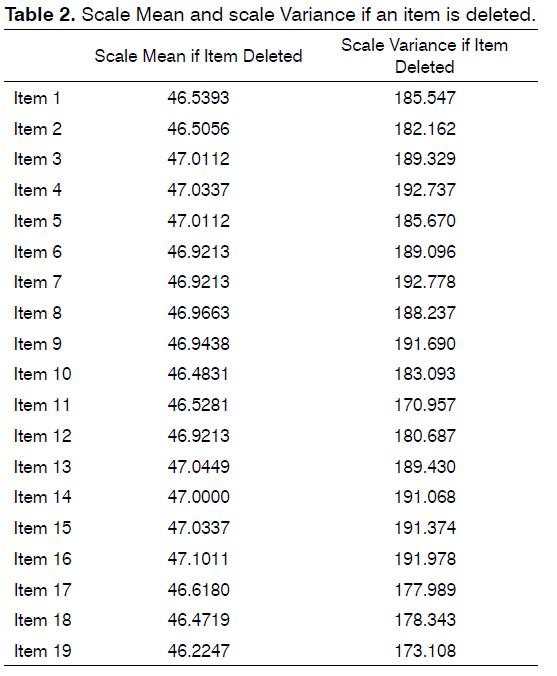 Table 2. Scale Mean and scale Variance if an item is deleted. 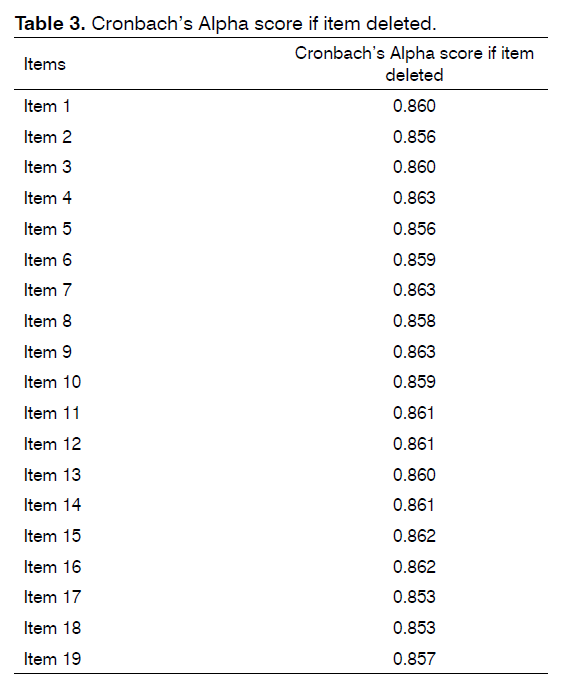 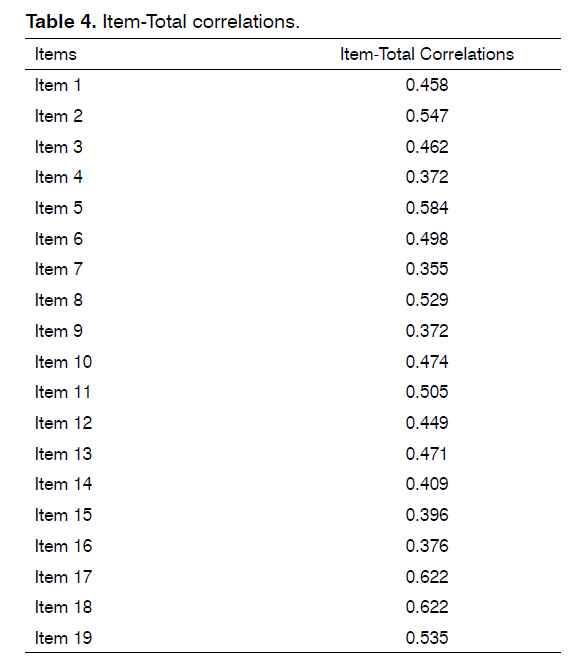 The factorability of the 19 MEQ items was examined. Several well recognized criteria for the factorability of the correlation were used. Kaiser-Meyer-Olkin measure of sampling adequacy was 0.805, above the commonly recommended value of 0.6, and Bartlett’s test of sphericity was significant (p = 0.000). One item (Item 15) was eliminated because they did not contribute to a simple factor structure and failed to meet a minimum criteria of having a primary factor loading of 0.4 or above and no cross-loading of 0.3 or above. 12 items loaded onto factor I. It is clear from the questionnaire that these 12 items all relate to the sleep-wake timings of an individual. This factor was labeled “Sleep-Wake timing”. Six items loaded onto a second factor. These items were related to the physical difficulties faced by individuals while getting up from sleep. This factor was labeled as “Physical difficulties”.

The aim of the current study was to develop and standardize Morningness-Eveningness Questionnaire in Kannada due to the paucity of such questionnaires in any of the Indian native languages to classify the circadian types. Studies on circadian rhythm and its influence on various health related conditions such as cancer, academics, cognition, blood pressure, are emerging and having a scale to measure the circadian pattern in a multilingual country like India is very essential. The percentage of population who can read and understand English in India is very less as majority depend on their native languages to communicate in day to day life situations.

Morningness-Eveningness Questionnaire is framed in a preferential manner, where the respondent is asked to indicate when he/she would prefer to wake up or start sleep, rather than when he/she actually does. It’s a numerical: multiple choices, 4 point scale. The sum gives a score ranging from 16 to 86; scores of 41 and below indicate “evening types”, scores of 59 and above indicate “morning types”, scores between 42-58 indicate “intermediate types” (Horne, 1976). Based on the scores obtained in the questionnaire, the subjects can be categorized into morning type, intermediate type and evening type.

A study reported that, alterations in circadian rhythm can lead to gastrointestinal diseases, cardiovascular diseases, cancer, diabetes and metabolic disturbances, pregnancy complications. It is also stated that there is no evidence till now of the influence of circadian rhythm on longevity [9]. Circadian rhythm has an effect on the latency of the auditory brainstem response (ABR) and the latency depends on the oral temperature. Authors reported that, a reduction in 1degree C in oral temperature is associated with an increase of 200 microseconds in the latency of wave V of ABR [10].

Researchers have identified a biological circadian clock in the hearing organ also, the cochlea. This circadian clock controls how well hearing damage may heal and opens up a new way of treating people with hearing disabilities. A recent study reported that mice which were exposed to moderate noise levels during the night suffered from permanent hearing damage compared to the same noise level during the day [11].

Since circadian rhythm is an emerging field of study in relation to health sciences, it is essential to have few reliable and standard scales to measure the circadian types/patterns in normal as well as in diseased. Morningness-Eveningness Questionnaire is one among the most widely used scales around the globe to measure the circadian rhythms. Till date MEQ is translated to Spanish, German, Thai, Japanese, and French and not in any of the Indian local languages.

Hence, it can be stated that MEQ-K can be used as a reliable tool to classify individuals into various circadian patterns. This inventory could easily be understood by all the participants.

The aim of the current study was to develop and standardize the Morningness- Eveningness Questionnaire in Kannada, the native language of Karnataka. For this purpose, back to back translation of the English version of MEQ was carried out and it was administered on 90 normal individuals to validate the same. The results showed that the obtained reliability as reflected by the Cronbach’s score of 0.870, suggested comparable validity and reliability of the questionnaire to English and other language versions of the MEQ.

Conceived and designed the experiment: TZ, JJ Validation of the translation into Kannada: HPP, BR Acquisition of data: TZ, JJ

All authors reviewed the final manuscript