Conclusion: Our study revealed that changes in olfactory threshold were not significantly different between two ESS and standard medical therapy groups one and three months after intervention.

Chronic rhinosinusitis (CRS) is characterized by a long-time inflammatory disease of nasal and sinus mucosa [1]. Olfactory dysfunction is common among CRS patients with a prevalence ranging from 48% to 83% [2-5]. Some previous studies believe that medical therapy is beneficial for improving olfactory function in CRS; nevertheless, endoscopic sinus surgery (ESS) is the treatment of choice in CRS patients who do not respond to medical therapy [1,6]. The effect of ESS on improving olfactory dysfunction has remained controversial due to lack of comprehensive evidence. Range of improvement has been reported from 25% to100% according to some prior studies; while others have reported no improvement or even reduced olfactory function following ESS [7-10].

This randomized clinical trial was conducted between April 2015 and February 2017 at Baqiyatallah University Hospital, Tehran, Iran. The present study was approved in ethics committee of Baqiyatallah University of Medical Sciences (Reference code: IR.BMSU. REC.1395.10) and registered in Iranian Registry of Clinical Trials (Reference code: IRCT2017050517413N24 ). Figure 1 shows a flowchart of the trial. A total of 30 patients with chronic rhinosinusitis without nasal polyps were needed for this trial. Patients between 18 and 65 years of age who had not responded to standard medical treatment with nasal irrigation by normal saline (4 times daily), nasal corticosteroid Fluticasone (one puff in each nostril daily) and antibiotic therapy by Cefixime (400 mg daily) for 4 weeks, were enrolled in the trial. Patients with history of head trauma or smoking and those who were using drugs that affect taste and smell were excluded from the study [14]. A written informed consent was obtained from all patients. 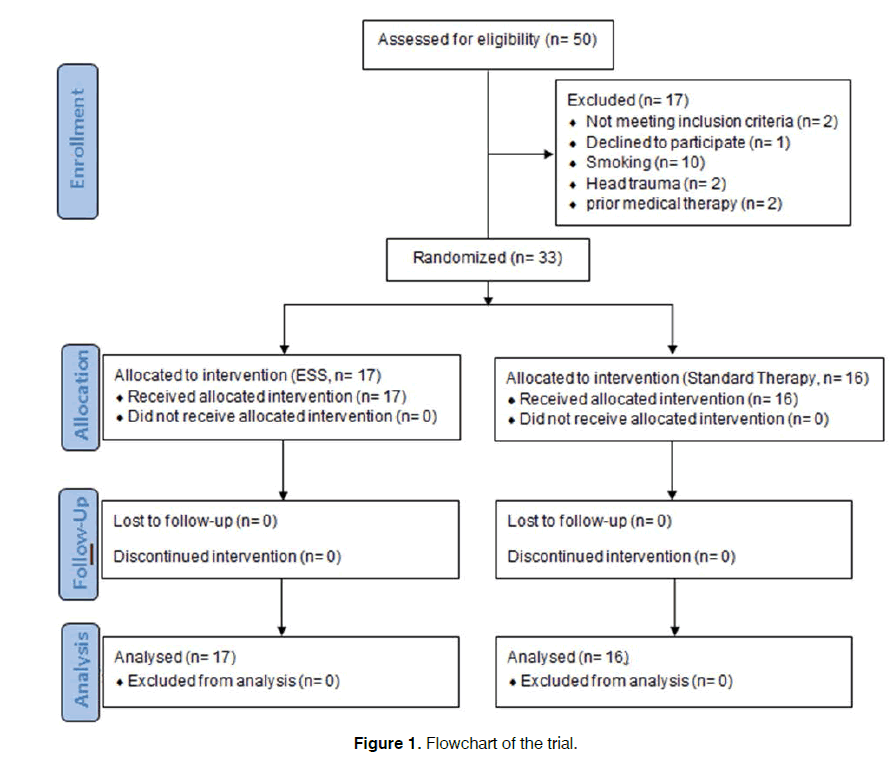 Figure 1: Flowchart of the trial.

Demographic information as well as drug, trauma and smoking history were recorded in a predesigned checklist. Patients were randomly allocated to two intervention and control groups using random number table; patients in intervention group underwent endoscopic sinus surgery by a single surgeon and olfactory threshold was evaluated using smell threshold test (STT) before, one month and three months after surgery based on Pensylvania University manual [15]. Patients in control group continued standard treatment with nasal irrigation of normal saline (4 times daily) and nasal corticosteroids (one puff in each nostril daily) and olfactory threshold using STT at baseline, one and three months after treatment.

Previously conducted clinical trials do not reflect surgical treatment for chronic rhinosinusitis (CRS). The most commonly accepted clinical approach is a vast medical treatment and surgery is only considered in patients with persistent symptoms. Regarding this approach, no RCTs had been designed for patients in whom medical treatment is failed [16]. In addition, there are no convincing evidences which indicate an improvement in quality of life of CRS patients after endoscopic sinus surgery [16]. Most of these data did not have control group for a better comparison.

In a previous study by Lined et al. the effect of functional endoscopic sinus surgery (FESS) in chronic rhinosinusitis patients with and without nasal polyposis was investigated. In this study 97 patients underwent evaluation one and six months after surgery which showed an effective and rapid improvement in quality of life of patients in both groups. Authors reported a 50% decrease in SNOT-22 one month after intervention which lasted in 6th month after intervention. Also FESS resulted in improvement of patients’ olfactory function which was evaluated by Sniff sticks; however, a small proportion of patients had experienced a worse olfactory function [17]. In concordance with Lined et al., Konstantinidis reported that 74% of CRS patients with polyps had improved olfactory function one year after ESS based on Sniff sticks evaluation [18].

In another similar study by Saedi et al. they evaluated the effect of endoscopic sinus surgery in 89 chronic rhinosinusitis patients who had undergone longterm medical treatment. In their study 77% of patients had improved olfactory function after surgery. The level of olfactory function was significantly associated with polyp pathology, disease duration, age, smoking and asthma [20].

Evaluating the relation between nasal nitrite oxide (NO) concentration and olfactory function, Elsherif et al. measured this factor before and three months after functional endoscopic sinus surgery (FESS) in chronic rhinosinusitis patients. In their study healthy people had higher levels of respiratory NO and olfactory threshold in comparison with CRS patients. Olfactory threshold and NO concentrations did not change after surgery [21]. Rudmik et al. mentioned that CRS patients who have anosmia and nasal polyp have a higher chance for improvement of olfactory function after endoscopic sinus surgery [22]. In another study by Litvack et al. 111 patients with CRS underwent ESS and were evaluated 6 and 12 months after surgery. The results revealed that patients with hyposmia did not have a remarkable improvement after surgery; while anosmic patients showed a notable improvement in smell identification test (SIT) measures [4].

Evaluating the effect of endoscopic sinus surgery on olfaction in chronic rhinosinusitis patients, Kohli et al. conducted a meta-analysis in which they concluded that ESS has resulted in improvement of all objective and subjective measures of olfaction. They reported that patients with nasal polyposis experienced better improvement; nevertheless, they mentioned that further studies are needed regarding this issue6. In the present study we evaluated only patients with chronic rhinosinusitis without nasal polyposis. In previous studies CRS pateints with and without polyposis were evaluated together for olfactory function after endoscopic surgery and the results were not separated for these two groups. Our study is unique for this issue.

Olfactory cleft obstruction by edema and polyps has been mentioned as the potential mechanism of olfactory dysfunction in CRS patients; however, Kern evaluated the biopsies from olfactory mucosa of CRS patients and found inflammatory changes in olfactory epithelium of patients with abnormal odor diagnosis test. It may be because of alteration in primary neuron’s function following inflammatory processes with or without concurrent obstructive mechanism.

Our study revealed that changes in olfactory threshold were not significantly different between two ESS and standard medical therapy groups one and three months after intervention. In addition, these changes were not remarkable before and after intervention within the groups. These results suggest that alterations in primary olfactory neuron function in CRS (according kern's study) are not reversed completely with our treatments. Data on the effect of ESS on olfactory function of chronic rhinosinusitis patients without nasal polyps are limited; so further multi-center studies with a larger sample size are recommended for better addressing of this question.