Introduction: Tinnitus is considered as one of the major symptom associated with many pathologies along with its presence in individuals with normal hearing. With varied cause and mechanism of its generation and increase in number of individuals with complaint of tinnitus, rehabilitation becomes crucial for Audiologists.

Tinnitus is referred to, a sound generated by brain in the absence of acoustic stimulation due to increased neural activity [1]. It is considered to be an auditory phantom sensation experienced by 10-15 persons out of general population [2]. The mechanism and nature of tinnitus generation is a major topic of research. However, few postulated etiologies can be attributed to age, exposure to loud noise, earwax blockage, air bone changes, Ménière’s disease, tempro-mandibular joint disorders, head or neck injuries, acoustic neuroma, etc. In contrast to the reasons behind tinnitus [3] quoted normal hearing individuals with presence of tinnitus. As opposed to the traditional paradigm-tinnitus as an ear disease, today, tinnitus is accepted as a brain disorder [4]. Tinnitus can be rated as mild to catastrophic level thereby having severe effects on social and emotional status, poor job performances, relationships and social functioning [5].

Today, with advancing field of Audiology, treatment strategies are aimed to reduce or eliminate symptoms and distress caused by tinnitus which includes Residual Inhibition Therapy (RIT), Masking Tinnitus Retraining Therapy and Cognitive Behavioral Therapy. RIT is referred to the auditory stimulation that results in temporary suppression of tinnitus [6]. Use of this treatment has shown 90% of the subjects with tinnitus relief and 10% with modification in tinnitus with minimal reliefs [7]. Literature has also reported the experience of residual inhibition in more than 8 out of 10 persons with tinnitus [8] and reduction in tinnitus loudness by 39% [9]. Use of RIT by Rex & Maha [10] has showed 16% effectiveness in reducing the tinnitus. This suppression of tinnitus provides brief relief which lets victims to exert some control over the trouble. Possible reasons for tinnitus suppression are stated as temporary desensitization by brain on exposure to tinnitus matched frequency noise [11] and influence of overlapping central mechanism [12]. Thus, the purpose of this study was to gain information on the effectiveness of Residual Inhibition Therapy as a treatment of tinnitus in normal hearing subjects experiencing tinnitus unilaterally and hence the study was undertaken.

In support of the literature, audiological practice encounters an increasing number of tinnitus and thus, one needs to evaluate the efficacy of the treatment. Thus, the study was designed to know the effectiveness of RIT by comparing pre RIT contra-lateral acoustic reflexes to post RIT contra-lateral acoustic reflexes in normal hearing subjects experiencing continuous tinnitus unilaterally.

The study was undertaken in a multidisciplinary teaching hospital. The study protocol was approved by the Institutional Ethical Committee Board at Nitte Institute of Speech and Hearing, Mangalore. Written consent was taken from each subject recruited for the study. Total ten subjects with a complaint of tinnitus persisting for more than two weeks were recruited. Subjects selected were within the age range of 20-45years. Inclusion criteria, called for subjects with normal hearing. Subjects with presence of any middle ear infection and/or any neurological symptoms, vertigo, giddiness were excluded from the study inclusion criteria.

The study followed pre-post experimental design. Subjects answered a questionnaire developed by five experienced Audiologists to rule out nature of complaint. Questions in the questionnaire probed to know the onset (sudden or gradual), progression (static or progressive), nature of the tinnitus (intermittent, continuous), ear experiencing tinnitus (right, left or both ears) and duration of tinnitus persistence. Similarly, Tinnitus Handicap Inventory [13] was administered on each subject. This inventory consists of 25 questions with a 4-point rating scale. Subjects with mild to moderate severity (score ranging from 18 to 56) were considered for the study. This inventory helped to rate the severity of tinnitus and to know its severity on day today life. Subjects experiencing continuous tinnitus with static nature for two weeks unilaterally were shortlisted.

The present study investigated the effectiveness of RIT using a questionnaire aiming to betterment of tinnitus and contra-lateral acoustic reflexes in adult individuals. For this, obtained questionnaire score and contra-lateral acoustic reflexes were measured at octave frequencies between 500 Hz and 4000 Hz were compared. The comparison was done at two circumstances: pre RIT experience and post RIT experience. Residual inhibition lasted for approximately 70 sec post RIT. The obtained results are quoted below: 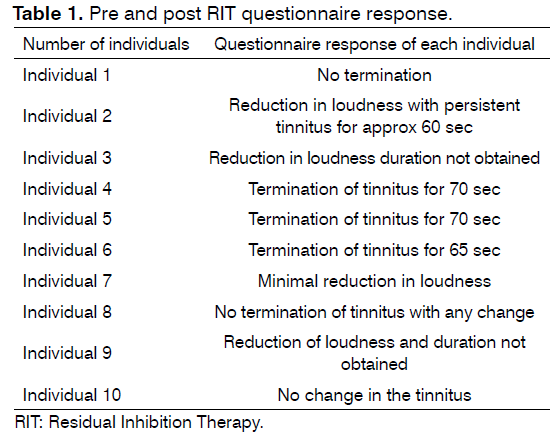 From Table 2, the Tinnitus Handicap Inventory did not show any significant changes in the scores obtained pre and post RIT. Three individuals showed betterment from tinnitus. However, the scores did not vary significantly. 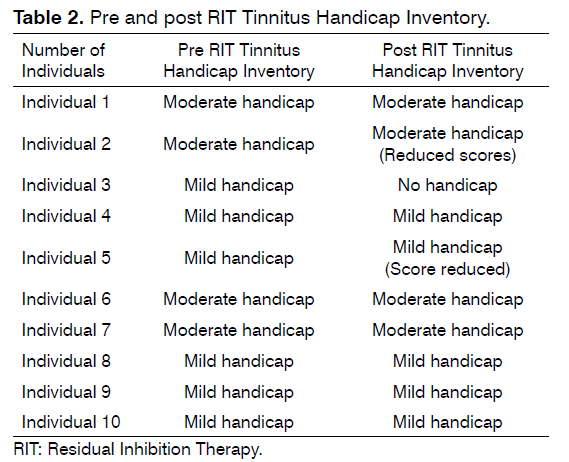 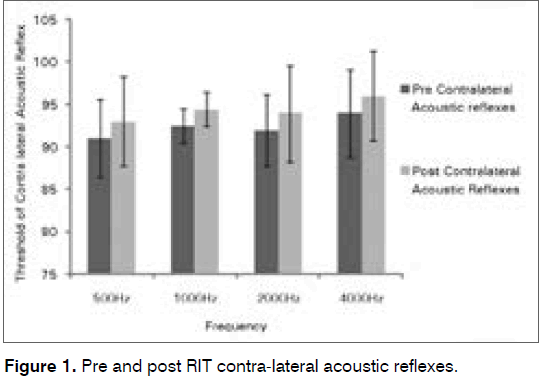 Primary aim of the study was to establish the effectiveness of RIT on subjects experiencing tinnitus. For this, pre and post RIT questionnaire response and contra-lateral acoustic reflexes were compared. This comparison did not yield a significant difference. The insignificant result to the success of RIT can be attributed to the influence of identification level of tinnitus expertise, the inability to match the tinnitus exactly due to overlapping of tinnitus frequency in some subjects and the effect of RIT lasting for few seconds or minutes8. Studies have reported that presence of any phobia related to tinnitus or any negative thought about tinnitus will lead to slow desensitization of tinnitus. This explains the part of neuro-physiological model, where annoyance or displeasure although not strongly evoked stimulate limbic and autonomic systems producing intrusive and aversive emotions and reducing the quality of life. The created negative feelings to a person cannot be treated purely by only audiological help. Thus, leading to failure of RIT when used as a standalone tool [16].

The current study results are in support with the previous literature where the 57% of tinnitus experiencing subjects relapse in 2 minutes, 23% subjects in 2 to 4 minutes, 11% subjects in 4 to 6 minutes, 4% subjects in 6 to 8 minutes, 2% subjects in 8 to 10 minutes and 3% subjects with more than 10 minutes [19]. Explanation on subject’s response to RIT after the target sound ends is with the start of silent phase of 20 to 35 seconds, followed by 30 to 35 seconds in which the tinnitus sound gradually recovers back. Similarly, the literature reports that few subjects experience increase in the tinnitus loudness than the decrement which lasts for a duration less than one minute [20]. However, only 54% subjects experienced complete silence in total 46 subjects with tinnitus and who underwent. Follow-up report of three subjects in the literature study has shown no change in tinnitus even after exposure to target stimulus for a run of 2 to 3 weeks RIT [15].

The poor agreement with the earlier literature could be due to differences in noise bandwidths used for the study, tinnitus pitch tuning methods, sound levels used and the various differences in the experimental details. Also, sample size used is small which can significantly influence the effectiveness of RIT.

The present study aimed at testing the effectiveness of RIT using pre and post tinnitus questionnaire response and contra-lateral acoustic reflexes. Contra- -lateral acoustics reflex thresholds obtained post therapy state is relatively higher than the pre therapy state, however, Tinnitus Handicap Inventory scores showed not much improvement. Hence, RIT as a standalone tool to suppress the tinnitus is questionable. However, further is warranted as the sample size used in current is small.