Evaluation of Adding Lidocaine to Dexamethasone in the Intra-tympanic Injection for Management of Tinnitus: A Prospective, Randomized, Controlled Double-blinded Trial

Objectives: Assessment of adding lidocaine to dexamethasone in the intratympanic injections for the treatment of subjective idiopathic tinnitus (SIT). Method: A prospective, controlled, randomized, double-blind study of forty-four patients with SIT diagnosed in the Department of Otolaryngology, Tanta University Hospital, a tertiary academic medical centre from March 2015 to October 2016. 44 patients were recruited in the study and were categorized into two groups; (A) included 22 patients managed with ITLD, and (B) included 22 patients managed with intratympanic postoperative ITD injection. Intratympanic injections were double-blind performed three times with one weak interval. After three and six months, the tinnitus improvement was studied using the following parameters: Arabic tinnitus questionnaires (ATQ), loudness matching test and Tinnitus handicap index (THI). Results: The effectiveness rates of ITLD for idiopathic tinnitus reported in the ATQ, THI, and in the loudness matching test were 74.5% in the ITDL group and 50.0%, 50.5%, and 40.0% in the ITD group, respectively. Statistically, there was a significant difference between both groups in 6 months duration. Conclusion: ITLD seems to be effective for SIT than ITD alone. The indication of ITLD for tinnitus needs to be limited to specific cases of resistant medical treatment.

Subjective tinnitus is perception of a phantom sounds that is heard consciously by the patient only and it represents the commonest form of tinnitus. Tinnitus is a heterogeneous mixed complaint that might occur alone in the presence of hearing loss, and can be extremely disabling. Tinnitus has been estimated to upset 5-10% of adult population [1].

Tinnitus may be due to abnormal activity in the neural auditory pathway and explained erroneously as a sound by the auditory center. However, in some cases, tinnitus genesis is still without cause, so it was called idiopathic. Subjective idiopathic tinnitus (SIT) may seriously affect the ability to relax or sleep or may lead to irritation, nervousness or depression [2,3].

Many trails have been adopted to manage tinnitus since the 1940s, by way of intra tympanic injection. This procedure requires only low doses of medication and minimal systemic exposure, thus avoiding dangerous systemic side effects [4,5].

Management of tinnitus by intra-tympanic lidocaine, corticosteroids and\or aminoglycosides have been used with different results [6].

Intratympanic steroid perfusion has the benefits of avoiding the systemic adverse effects encountered with systemic corticosteroids and ensures high concentrations of medication to the inner ear end organ. Actually, steroids delivered by the intratympanic injection have been proved to be higher concentrations in the perilymph than those intravenously injected [6].

Lidocaine (Xylocaine), also called lignocaine, is a potent local anesthetic drug. Lidocaine mechanism of action on the auditory system in IST is still controversial as it has both peripheral and central action [7].

This study was designed to evaluate the effectiveness of adding lidocaine to intratympanic steroid in the patients with IST.

The study design and consent forms were approved by the research ethics committee of Tanta University Hospital. The study was conducted according to the declaration of Helsinki and a written informed consent was assured from every patient who agreed to take part in the study.

Two identical, prospective, double-blind controlled single-center randomized clinical trials assessed the effectiveness and safety of adding lidocaine to dexamethasone by intratympanic route in IST. The study was carried out on 44 patients suffering from idiopathic subjective non-pulsatile tinnitus (IST) attending to the out-patient clinic at a tertiary hospital, from March 2015 to October 2016. The injection was given by two senior surgeons each for certain group. This study was approved Clinical trials register number: NCT03265197.

The trial protocol is summarized in the CONSORT flow diagram (Figure 1). 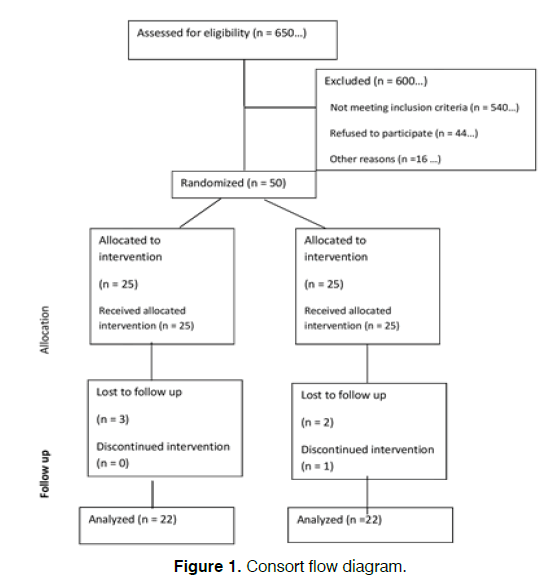 A total 44 patients suffering from IST, non-pulsatile type, bilateral tinnitus associated with hearing loss not exceeding 30 dBHL, aged between 30 to 65 years. Patients were equally divided into two groups (A and B). Group A was injected with combined lidocaine 2% and dexamethasone 8 mg/2 ml (ITLD).

Group B was injected only by dexamethasone 8 mg/2 ml (ITD). Exclusion criteria included extreme age, pulsatile tinnitus, objective tinnitus and ear inflammation. Intervention and randomization: Every patient was given a code number to keep his personal information confidential. Adequate provisions to maintain the privacy of patients and confidentiality of data were taken into consideration.

To avoid selection bias, each candidate, who signed an informed consent for participation in the study, was given a number from one to forty-four. For every two consecutive patients; the first was enrolled in group A and the second was enrolled in group B until the end of the 44 patients.

The drum was anesthetized locally by cotton soaked with xylocaine 10%. The prepared solution was injected through an operating microscope at the postinferior quadrant of the tympanic membrane using a 27-gauge needle. About 1 ml of the drug was injected in the more affected ear. In group A, we used combined lidocaine 2% and dexamethasone (8 mg/2 ml) with a ratio (1:1).The injection procedure was done by two different senior surgeon one for each group. In group B, we used dexamethasone only for injection 8 mg/2 ml.

The patients would remain in 30 degree head title away from side of injection for about 30 minutes and avoid swallowing after the injection to keep the Eustachian tube closed and give the drug maximal time of contact with the round window. The patients were kept in our department for 6 hours for observation of any complications. This procedure was repeated for three times at weekly interval. Follow up visits were scheduled 1 month, 3 months and 6 months from the first injection.

All participants were subjected to the following:

D-Tinnitus Loudness Measure: Tinnitus loudness match is the procedure of adjustment of the intensity of pure tones or narrow-band noise to the same loudness as tinnitus, usually at the pitch-matched Frequency scot.

Starting at intensity level slightly below that of the absolute threshold and continue increasing the level until loudness is matched (Goldstein and Shulman, 1991). A double-blind, randomized- controlled clinical study was performed. Participants were assigned to two groups of equal numbers by permuted block randomization. A coordinator was set to provide combined lidocaine 2% and dexamethasone group (A) and dexamethasone group (B) to the participants visited in sequence to the clinic.

Both patients and investigators were blinded to the components of the fluid injected, and a different investigator analyzed the final results without considering any information. The enrolled participants completed the tinnitus loudness scale, tinnitus questionnaires, and the tinnitus handicap index (THI) at baseline, 12 weeks, at six.

The efficacy of the intratympanic application of lidocaine and dexamethasone (ITLD) was determined by comparing Arabic tinnitus questionnaire (ATQ), tinnitus handicap index (THI) and tinnitus loudness scale at the beginning of the study and at 12 weeks, six months. We defined improvement as a decrease in two or more items in the tinnitus questionnaire, a decrease of 5 or more score of THI, and >5 dB decrease in the tinnitus loudness scale.

SPSS version 18.0 (SPSS Inc.) was used to analyze data. One-way analysis of variance (ANOVA) was used to compare age, sex, the duration and loudness of tinnitus. A chi-square test and a paired t-test were used to compare the pre and post-injection values recorded in the tinnitus questionnaire, THI, and tinnitus loudness scale. Significance was determined to be at the confidence level of P<0.05.

Table 1. Comparison of characteristics between ITLD group (A) and ITD group (B).

No significant differences statistically were detected between both groups (P>0.05).

The main presenting symptom of the patients was noise-like roaring non-pulsatile sounds in the 44 patients (100%). Audiometry showed bilateral normal peripheral hearing in 30 cases (68.2%) and mild sensory hearing loss in 12 cases (31.8%). No patients had vertigo or aural fullness.

The improvement rates after three months between ITLD group A and ITD group B injection recorded in Arabic tinnitus distress scale self-assessment questionnaire (ATQ) were 73.8% and 46.4% respectively. The improvement rates in THI and the tinnitus loudness scale were both 73.8% in ITLD group A, and 50.0% and 46.4% respectively in ITD group B (Table 2).

Table 2. Comparison of the mean and standard deviation of pure tone audiometry at different frequencies pre and postoperative in the tinnitus patients (P > 0.05).

ITLD in idiopathic tinnitus appeared to be has more effect ITD, as recorded in the tinnitus questionnaires (ATQ) and in the loudness matching test and statistically significant differences between the ITLD and the ITD groups were detected. The improvement of ITLD/ITD injection remained unchanged for a period of 8 weeks. Worsening rates recorded in ATQ, in the THI, and in the tinnitus loudness scale were 4.1%, 5.4%, and 7.4%, respectively, in the ITLD group; and 3.5%, 5.4%, and 6.3%, respectively, in the ITD group B. No statistically significant differences between both groups were reported (Figures 2A and 2B). 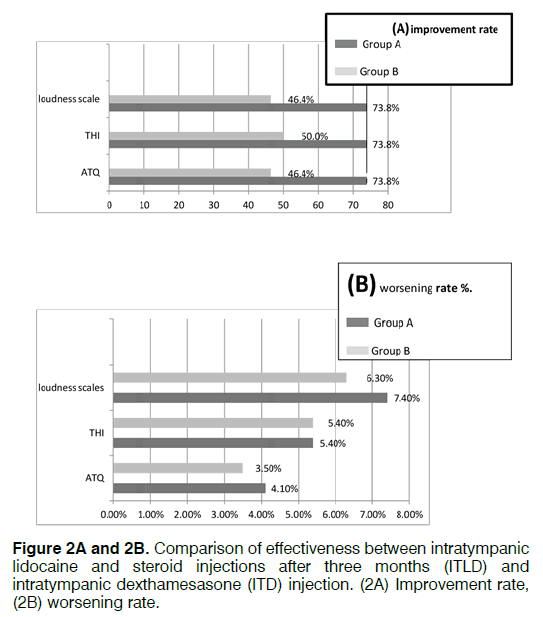 Figure 2A and 2B Comparison of effectiveness between intratympanic lidocaine and steroid injections after three months (ITLD) and intratympanic dexthamesasone (ITD) injection. (2A) Improvement rate, (2B) worsening rate. 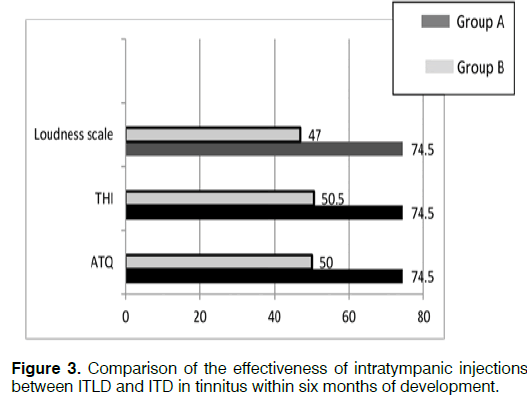 Figure 3: Comparison of the effectiveness of intratympanic injections between ITLD and ITD in tinnitus within six months of development.

ITLD injection for tinnitus within six months of its development was statistically effective than ITD injection. Post-operative complications: Post-injection complications in the patients:

Nausea: Moderate degree of nausea which lasted for 6-24 hours in both groups.

Ear fullness: All patients complained from a temporary sensation of fullness in the ear in both groups.

No cases complained of sensory-neural hearing loss in both groups.

Tinnitus is a common distressing disorder in otology field that may cause various psychological and somatic problems that affect the patient’s life quality. Idiopathic Subjective Tinnitus (IST) which is the topic of this study is thought to result from an increase in spontaneous activity in the neurons of the auditory system, also may be due to the redirection of data and the role of the non-classical auditory pathways [9].

Current management options include hearing aids, tinnitus retraining therapy (TRT), masking techniques and oral medications. However, none of these interferences are effective for all patients. Therefore, intratympanic treatment with various medications has become an important modality for this disorder over the last years.

This treatment could be used in many inner ear disorders like a sensory-neural hearing loss, Meniere’s disease, tinnitus associated with these disorders, and idiopathic tinnitus [9].

44 patients were complaining of various degrees of subjective tinnitus and were divided into 2 groups, group A with ITLD injection and group B with dexthamesasone ITD injection as a control group. The group A with ITLD achieved 74.5% improvement (after six months of initial intratympanic injection)

Steroids show their effects by crossing the round window membrane to inner ear and banding with the steroid receptors which have been located in animals and also in humans’ labyrinth, while lidocaine has labyrinthine anesthetic effect. The mechanisms of action of steroids in management of tinnitus may also include the suppression of irritability or hypersensitivity of the sensory cells in the inner ear, reduction of the inflammation caused by immune-mediated, autoimmune dysfunction, and/or direct effect on the inner ear neuro-epithelium.

Sakata and Itoh derived excellent results for tinnitus in 45% of patients, good results in 29%, and no effect in 26%, with an overall positive response of 74% by intratympanic injection of dexamethasone (4 mg/ mL) in Meniere’s disease. However patients with labyrinthine vertigo and associated tinnitus, dexamethasone injection was slightly less effective [10].

Therapeutic efficacy obtained with intratympanic injection of lidocaine ranged between 49% and 86%, based on various reports. Particularly, Szabados reported improvement in 86% of cases and Sakata showed improvement in 49.5% of cases. Infusion of lidocaine via the tympanic cavity may bring a transient (for hours or days) slight sensory hearing loss in the lowfrequencies [11,12].

In his study, Coles reported; violent vertigo, vomiting, and taste disturbances for several hours after intratympanic injections for tinnitus. Hammond et al. treated tinnitus sufferers by intratympanic application of either the long-acting betamethasone diproprionate (disprofos) or the short-acting dexamethasone ophthalmic solution and stated that intratympanic route is a safe, simple, office procedure. Their results were 38% persistent improvement, 17% transient improvement, 42% no change and 3% got worse, and however, no hearing deterioration was encountered [13,14].

Our results clearly demonstrated that intratympanic injection of lidocaine (xylocaine 2%) and corticosteroids (dexamethasone 8 mg/2 ml) in ratio 1:1 is safe and effective, more than dexamethasone only, especially when the tinnitus fails to be controlled by systemic drug treatment.