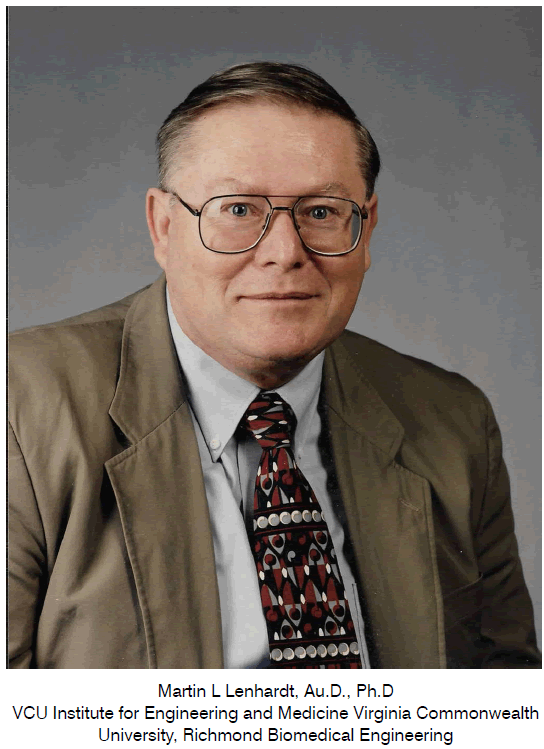 Prof. Martin L Lenhardt (Marty) was very special. To know him and to be called his colleague and friend was an honor. He was a good man, dedicated to his family, religion and friends.

Barbara Goldstein PHD audiology and I were introduced to Marty in 1999 by a friend who shared our mutual interests in auditory science, sensorineural hearing loss, and tinnitus. To speak with Marty, in person or on the phone, was memorable. Our conversations would center on any one of a number of topics of our tinnitus collaborations- tinnitus theory, brain auditory masking function, innovative devices for attempting tinnitus relief, - but always would include anecdotal references to our families, especially his large family, and his pride and love for his wife Anita, and end with a question. The question was: Are you ready for a joke? I would listen - and we would laugh together. Both of us were refreshed and ready to get on with our mutual interests, joys and frustrations that life shares with us all.

Prof. Martin L Lenhardt (Marty) was a renaissance man. Yes, he was ahead of his time, and was recognized by his mentors, professors, colleagues, students and friends throughout his professional career. His formal education and professional interests focused on the auditory system - in all life forms. He recognized, early on, the significance of linking the study of the phylogenetic development of the hearing and balance system with the development of the brain and its translation for humans to understand, normal and abnormal sound perception.

His audiology background provided a basis for multiple interests which included but were not limited to development of engineering devices for ear protection, and hearing devices for the hard of hearing. His interest in tinnitus led to establishment of original and continuation of existing collaborative protocols for investigation of tinnitus with our tinnitus team at SUNY Downstate, Barbara Goldstein, PhD, Audiology, Arnold Strashun, M.D. Nuclear Medicine, and Matthew J. Avitable, PhD. Computer Science. Together, our efforts resulted in original publications which reported tinnitus relief in selected tinnitus patients with ultra sound acoustic stimulation. Special was his understanding of acoustical masking, which he was preparing as a chapter for a new tinnitus textbook. His publications were numerous, original, and a contribution to the science of acoustics, biomedical engineering, deafness, tinnitus, noise control particularly associated with traumatic brain injury, and tinnitus. His teaching was respected and remembered for is originality, and clinical significance by both faculty and students.

The VCU department of engineering and medicine provided Marty with an outlet for his academic, administrative, biomedical engineering, and creative interests for the clinical applications of acoustics. He was a Professor in Bioengineering and Otolaryngology; an invited speaker at the Acoustical Society of America, and Associate Editor of the International Tinnitus Journal. His publications total in excess of 100 in number, and reflect the eclectic application of his knowledge based on acoustics to associated clinical issues of ear and brain. His clinical interests resulted in multiple patents received from the US Patent Office which include but not limited to acoustical based methods to increase tissue oxygenation, device for learning and gait improvement, a strobe device to influence brain wave patterns, noninvasive cerebral spinal fluid pressure monitor apparatus and method, and for tinnitus, a masking stimulus of ultrasound noise to stimulate the auditory cortex for attempting tinnitus relief, and a tinnitus masker/suppressor. He was particularly proud of creating acoustic monitoring and therapeutic products for hearing health care including revolutionary digital devices for high fidelity listening needs of the aging population and developing sensory substitution devices with the National Eye Institute SBIR; military applications US Coast Guard SBIR; US Army SBIR, tinnitus diagnosis; speech detection in high noise (Northrop Grumman Newport News Inc.; Lockheed Martin, Inc.).

Prof. Martin Lenhardt received many honors which included Distinguished VCU Inventor of the year (2011). Interim Chair of the VCU Program in Biomedical Engineering from July, 1995 to August, 1996, reviewer for multiple journals including the Journal of the Acoustical Society of America, The International Journal of Audiology, The Journal of Pediatrics, Journal of the American Auditory Society; Center for Innovative Technology, National Science Foundation, and current State Professional Associations as Vice President for Audiology Speech and Hearing Association of Virginia 2012-2016, and State Leader American Academy of Audiology 2014.

The world has benefitted from an extraordinary gifted Professor in Bioengineering, Audiology and Otolaryngology, whose teaching and original scientific contributions are an example of how the application of one’s expertise in acoustics can be translated for clinical issues of ear and brain from which many have, at present, and are expected to make reference to in the future.

I am honored to have been called a friend of Martin Louis Lenhardt, M.D., PhD, Professor in Bioengineering and Otolaryngology, husband, father and grandfather.

To Anita, the children, grandchildren and the Lenhardt family, we share your loss, but celebrate together a life which will not be forgotten. Professor Prof. Martin L Lenhardt (Marty) was a man ahead of his time.