Objective: To evaluate the prevalence of external ear complications among Iranian aural foreign body users attending to otolaryngology clinic of our hospital. Methods: In this cross-sectional study patients attending to Otolaryngology clinics of Baqiyatallah hospital were enrolled regardless of their age, gender and reason of attending. Patients between 15 and 60 years of age were included in the present study. Those with positive history of chronic ear diseases, ear surgery, congenital ear disorders, trauma to ear or head and neck region or shock wave trauma were excluded from the study. Demographic information as well as data on chief complaint, educational level, frequency and type of used foreign body and findings of physical examination and Otoscopy by a single otolaryngologist were recorded in a predesigned checklist. Results: Eventually 362 patients (232 male and 130 female) with a mean age of 40.32 ± 16.90 years underwent analysis. Of all patients 244 (67.2%) were using a kind of aural foreign body frequently and Cotton bud was the most popular (63.5%) used foreign body among patients. Drying ear canal was the most common (54.9%) reason of using AFBs among study individuals followed by itching (29.5%) and pyorrhea (11.06%). Also 11 (4.5%) patients were using AFBs as a habit with no specific reason. Itching was the most prevalent symptom reported by both aural foreign body users (78%) and non-users (45.5%); however it was significantly higher among AFB users (p = 0.026). Also hearing loss was significantly more reported by AFB users (p = 0.033). A majority of patients had normal physical examination in both AFB users and non-users group. Inflammation of ear canal was significantly more detected in AFB users (p = 0.004). In addition, rate of right ear wax impaction was higher among AFB users (p = 0.016). Conclusion: In conclusion we realized that 67.2% of patients attending to Otolaryngology clinic of our

Aural Foreign Body (AFB) is defined as every considerable object which is potentially possible to be inserted into the ear canal and is a common presentation to Otolaryngology clinics [1]. Cotton swabs, hairpin and other foreign bodies are frequently used by people for cleaning their ears or as a habit. Ear canal has two parts; external one-third is cartilaginous and internal two-third is bony part which is covered by a thin layer of periosteum and skin and is the most sensitive part of ear to AFBs. The most prevalent clinical finding of patients after removal of foreign body is abrasion of external ear canal skin [2]. This abrasion is a predisposing factor to otitis externa by organisms like Pseudomonas aeruginosa, Staphylococcus aureus, and fungal agents [3]. Also Tympanic membrane could be easily injured and traumatized by a foreign body [4].

Previous studies have reported that the most common used foreign bodies by children are seeds and cotton tip swabs (CTS) by adults [5]. Foreign body use by people has several known complications which is resulted from the wrong impression about ear wax [6,7]. In addition it has been mentioned that external canal itching is the most prevalent complication of AFBs followed by otitis externa, otomycosis, wax impaction and tympanic membrane rupture [8].

Conditions that cause harm to external ear are mostly dependent to patients’ behavior and are usually preventable; so informing patients about preventing behaviors and possible complications may significantly decrease aural foreign body- related morbidity [9-11]. This action involves proper and accurate perception of aural foreign body use prevalence and its related complications in population.

Despite a variety of conducted studies worldwide for approving the direct relation between prevalence of external ear complications and use of aural foreign bodies, no comprehensive studies have been done in Iran yet. So in the present study we aimed to evaluate the prevalence of external ear complications among Iranian aural foreign body users attending to otolaryngology clinic of our hospital.

This cross-sectional study was conducted between May 2016 and June 2016 at Baqiyatallah university hospital, Tehran, Iran. This study was registered at ethics committee of Baqiyatallah University of Medical Sciences.

Patients attending to Otolaryngology clinics of Baqiyatallah hospital regardless of their age, gender and reason of attending were enrolled in the study. Study process was explained for all the patients and a written informed consent was obtained. Patients between 15 and 60 years of age were included in the present study. Those with positive history of chronic ear diseases, ear surgery, congenital ear disorders, trauma to ear or head and neck region or shock wave trauma were excluded from the study.

Demographic information as well as data on chief complaint, educational level, frequency and type of used foreign body and findings of physical examination and Otoscopy by a single otolaryngologist were recorded in a pre-designed checklist.

Data were analyzed using SPSS software version 21 (SPSS Inc., Chicago, IL) for Microsoft Windows. All continuous data are expressed as mean (SD), and categorical variables are expressed as number and percent. Quantitative variables were checked for normality using the Kolmogorov–Smirnoff test. Differences of continuous variables between groups were analyzed using independent t-test. A p-value of less than 0.05 was considered as statistically significant. 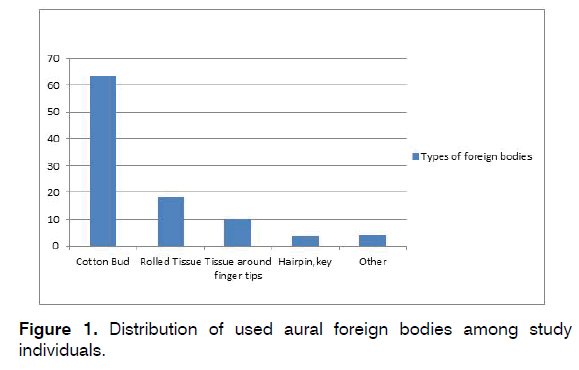 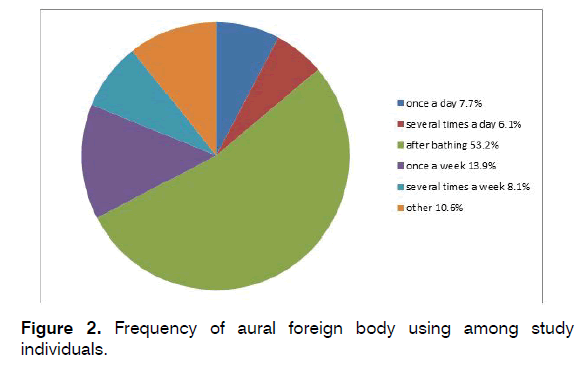 We found that most (about 67%) of the patients attending to Otolaryngology clinic of our hospital use aural foreign bodies for a variety of reasons such as itching, humidity, pyorrhea and asymptomatic. The most prevalent reason for visiting was ear problems followed by nasal symptoms. Cotton tip swabs, rolled tissue, tissue around finger tips, hairpin and key were among the most prevalent type of used aural foreign bodies, respectively. In the present study most of the patients were used to use foreign bodies after bath and as a reason of ear canal humidity. More than half of the patients were aware that using aural foreign bodies are harmful and a majority of this awareness was provided by Radio and Television. The most part of the patients were in middle-income category and there was no significant difference between aural foreign body users and non-users for income level. Regarding the symptoms itching and hearing loss were significantly more reported among the foreign body users; however remaining symptoms like dizziness, pain, feeling fullness and ringing were not different between two groups. In physical examination inflammation, external otitis and right ear wax impaction were significantly more present in foreign body users. Other findings such as abrasion, tympanic membrane perforation, otorrhea and left wax impaction were not significantly different between two groups.

Lee et al., in a similar study, reported that about 36% of study individuals were using a kind of aural foreign bodies which has a lower rate comparing to the present study6. In Fasunla et al. and Sheikh et al. study cotton tip swabs were the most prevalent used foreign bodies in patients which are in concordance with the present study [12,13]. Onotai et al. mentioned that cotton buds were being used by 18.6% of adults as the most common foreign body [5]. Also in Hobson et al. study 53% of study individuals were used to use cotton buds for cleaning their ear [14]. In agreement with the present study, in Hobson et al. study ear problems were the most common reason for attending to Otolaryngology clinic followed by nasal, pharyngeal and other problems [14].

Kumar et al. have reported itching as the most common (34%) complication among aural foreign body users followed by external otitis (23%), otomycosis (15%), and external ear canal trauma (9%). Tympanic membrane perforation was found in 4% of patients8. In accordance with our study, in Adegbiji et al. study most (75.1%) of the patients had right ear wax impaction which was significantly more prevalent than bilateral wax impaction [15]. In Macknin and colleagues study 7% of 651 evaluated patients had bilateral wax impaction which had blocked more than 75% of ear canal [16].

In a descriptive study by Al-juboori on 224 patients they included patients with positive history of aural foreign body use and those who underwent foreign body extraction at the time. Beads were the most (30.4%) prevalent extracted foreign bodies among patients followed by cotton tip swabs (22.3%) and seeds (13.8%). In his study 87.5% of cases had no complications and the common complications were canal abrasion (4.5%), bleeding (3.6%), external otitis (3.1%) and tympanic membrane perforation (0.9%)2. In a search of 5-year data, Macknin et al. evaluated emergency department visits for aural foreign bodies. Out of 9472 evaluated cases, they reported jewelry as the most common (39.4%) ear foreign body followed by cotton tip swabs (19%) and other (28%) objects [16].

The present study has some limitations. We did not have complete and comprehensive information on past medical history of patients and also we had a wide range of ages among study individuals.

We realized that 67.2% of patients attending to Otolaryngology clinic of our hospital were used to use a kind of aural foreign bodies and itching was the most common chief complaint of these patients. Otoscopy was normal in most of the patients and itching was the most prevalent chief complaint. Inflammation and external otitis were significantly more present among aural foreign body users.