Objectives: Preschool children hearing impairment is a common otologic diseases worldwide. The burdens of this preventable condition can be reduced in developing country. This study was carried out to determine the prevalence, diagnosis and management of hearing impairment among children less than 5 years seen in our center. Method: This was a prospective hospital based study of preschool children with complaints of hearing impairment in Ekiti state university teaching hospital, Nigeria. This study was conducted over a period of two years (February 2016 to January 2018). Data was obtained from consented patients by using pretested interviewers assisted questionnaire. Data obtained was collated and analyzed by using SPSS software version 18.0. D escriptive statistics was used to present and expressed the data as simple tables and charts. Results: The prevalence of hearing impairment in this study was 5.9% with peak value of 37.6% at preschool age 3 years. There were 42.6% males and 57.4% females. Majority (51.5%) of the patients were urban dwellers. The aetiologic factors of hearing impairment include; 15.8% neonatal jaundice, 13.9% febrile illness, 12.9% otitis media and 11.9% birth asphyxia. Prelingual presentation was commonest in 57.4%. Common clinical features includes yet to speak, restlessness/stubborn and not responding to command in 60.4%, 48.5% and 46.5% respectively. Commonest type of hearing impairment was sensorineural hearing loss is 61.4%. Type A tympanometry (normal) was the commonest findings in 82.2%. Conclusion: Preschool children hearing impairment with late presentation is a common otologic diseases burden to parent and otorhinolaryngologist in our center. The common causes were preventable with resulting permanent auditory damage.

Hearing impairment occurs when there is reduction in hearing acuity. Its symptoms and causes must be found and treated. Hearing impairment is a neglected chronic otological disorder with varying aetiology. It is one of the commonest sensory disabilities worldwide. In 2014, WHO estimated that over 360 million people worldwide had different form of hearing impairment. It was found that 328 million were adults while 32 million were children [1]. This constituted about 5% of the world population. Hearing impairment is a significant health care burden. Hearing impairment was found in 70% of people in lowincome countries, and 25% develop hearing loss during childhood [2,3]. Infants born in resource-rich countries compared to infants born in resource-poor countries are nearly twice as likely to have hearing loss (6 cases/1000 children vs. 2-4 cases/1000 children) [4,5].

In children with moderate to severe hearing impairment, the disorders are identified early while in children with mild or unilateral hearing impairment often goes unnoticed and detected late. Late identification result in communication difficulties [10]. Consequences of hearing impairment include, delay in language acquisition, inability to interpret speech sounds, lack or reduced ability to communicate, economic and educational disadvantage, social isolation and poor self-concept and stigmatization [11,12]. Hearing impaired child finds it difficult to concentrate, cannot understand what is going on, learning problems and poor academic activities. On account of disability adjusted life-years (DALYs), WHO ranked hearing impairment as the 12th most common contributor to disease burden and the third most common cause of years lived with disability [2].

World Health Assembly affirmed the importance of interventions to control preventable hearing loss in 1995 meeting. Very unfortunately, only a handful of developing nations have collected data on the prevalence and aetiology of hearing impairment in children [13,14]. African countries like Nigeria are yet to collect theirs. This emphasized the importance of primary prevention of hearing loss with vaccination, improved education and prenatal care, and recommended that all nations perform population-based epidemiologic studies to determine the prevalence and causes of hearing impairment, to permit targeting of preventive efforts against the most common aetiologies [15].

This was a prospective hospital based study of preschool children (aged less than 5 years) with complaints of hearing impairment. The study was conducted in ear, nose and throat department of Ekiti State University Teaching Hospital, Ado Ekiti, Nigeria.

This study was conducted over a period of two years during the months of February 2016 to January 2018.

The parents/guardians/patients were briefed about the scope of the study. After getting oral consent, pretested interviewers assisted questionnaire was administered. Data obtained includes their bio-data, age at first presentation, aetiologic factors. Other variables included pregnancy, delivery, neonatal history and developmental milestones were obtained. Past medical, surgical, drugs, hospitalization, family and social history were also obtained.

This was followed by otorhinolaryngological, head and neck examination while detailed ear examination with an Otoscope was performed.

The hearing evaluations were done which included tympanometry, otoacustic emission and auditory brain stem response audiometry where each was indicated. The findings were documented.

In this study, numbers and codes were assigned to each variable. Data entry was done in Excel spread sheet. Data was later transformed to SPSS (Statistical Package for Social Sciences) software version 18.0. Descriptive statistics was used to present the data. Data was analyzed and expressed as simple tables and charts.

For this study, ethical clearance was sought for and obtained from the ethical committee of our hospital.

Table 1. Age distribution of the patients.

Table 4. Clinical features of hearing impairment among the patients (n=101). 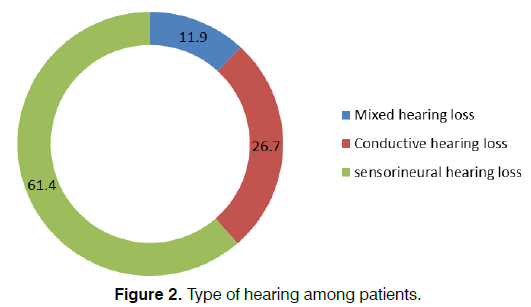 Figure 2: Type of hearing among patients.

In this study, objective audiometry was done on patients based on clinical findings. Type A tympanometry (normal) was the commonest findings in 83 (82.2%) followed by type B tympanomtry in 16 (15.8%) and type C tympanometry in 2 (2.0%). Also otoacustic emission evaluation in patients revealed transient evoked otoacustic emission to be poor emission from 1.5 KHz to 4.0 KHz with outer sensory hair cell dysfunction and DPOAE at 2.0 KHz to 5.0 KHz indicative of abnormal function. The patients’ auditory brainstem response evaluation (a latency/intensity function was conducted at 39.1 clicks/seconds). Observable repeated waves I, III and repeat wave V were identified down to 80 dB hearing loss Au, suggestive of sensorineural hearing loss (SNHL). Impression of bilateral moderate-severe, severe and profound sensorineural hearing loss were noted in 3 (3.0%), 21 (20.8%) and 48 (47.5%) respectively. However, 29 (28.7%) of the patients could not carry out ABR testing. This is demonstrated in Table 5.

Majority of the patients 72 (71.3%) had prehospital treatment prior to hospital presentation. Conservative treatment of causes of conductive hearing loss such as earwax impaction, otitis media and externa was done. These include ear syringing and aural toileting/ dressing in 48 patients. Surgical treatment of conditions like adenoid and tonsillar disorders was done in 17 of our patients. Based on objective audiometric findings, recommendations were amplification and speech therapy in 10 and 31 patients respectively. Cochlear implants were required in 40 patients and these were referred for further treatment. This is showed in Figure 3. 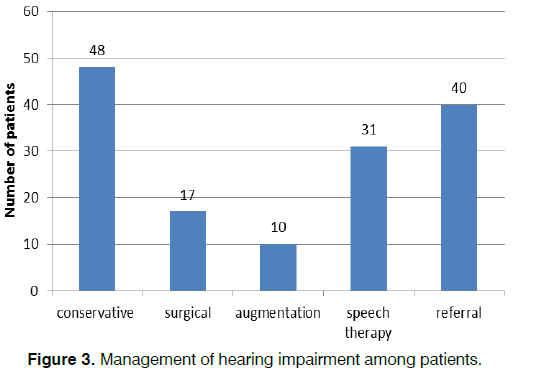 In this study, there was late presentation in majority of our studied patients. Majority presented to us at or after the age of 3 years. This finding is not different from findings by other researchers in their reports [19-21]. These late presentations may be attributed to lack routine neonatal hearing screening in our country. Other reasons for late presentation may be parental ignorance and poverty. In this study, females had a significantly higher sex prevalence of hearing impairment than males. Contrarily, most studies reported hearing impairment occurs more commonly in male [22,23]. Females have a shorter stiffer cochlear which provides a more sensitive frequency response and the hair cells are stiffer and therefore more sensitive. They significantly increase noise induced hearing loss among female. Traditionally, males have been noted to be more likely to be exposed to loud noises from work machines or firearms, and thus hearing loss. The parental education does not affect pattern of hearing impairment in this study. Contrary to other report that hearing loss is more common in children whose mothers are less well educated [24]. This was said to be probably due to their lower socio-economic status, poorer access to good health, poorer standard of living, and increased risk of recurrent ear infections [17].

The commonly implicated aetiologic factors associated with the hearing impairment in this study were neonatal jaundice, febrile illnesses, birth asphyxia, birth truama, ototoxicity, otitis media and earwax impaction. These findings were similar to reports from previous studies [19,21]. These factors are preventable with good antenatal, natal, postnatal, immunization and pediatric practices. It therefore means that the common cause of preschool hearing impairment in our practice is acquired. Early hearing screening of children with these diseases can prevent and leads to effective management of hearing impairment.

In this study, due to late presentation majority of the patients presented with yet to speak, not responding to command, response to loud voice, delayed developmental milestone and restlessness/stubborn. Because speech acquisition is a later developmental milestone this make it unnoticed to parent with very late presentation. It is distressing to parent due to social stigmatization, socioeconomic and education effects.

It may be surprising to note that there is no routine hearing screening of children in majority of health institutions in my country. Manpower is there but it is due to lack of facilities and health policy. Due to patients’ age at presentation objective audiometry were done for all our patients. Majority have bilateral severe to profound sensorineural hearing loss. Only few of the patients benefited from hearing amplification and speech therapy available in our center. These outcomes are worrisome to the otorhinolaryngologists, audiologist and parents [25-27]. Those that benefited from hearing aids also have problem of social stigmatization. Many parents initially opposed the use of hearing aids in their children. Cochlear implant is not available in our setting for the children that required transducer. Such patients were referred to developed countries where the facilities are available. Most parents could not afford it because of financial constraints. The only alternative is provision of special education for children who cannot afford cochlear implant surgery [28,29]. This is highly pathetic for potential children.

Preschool children hearing impairment is a common otologic diseases burden to parent and otorhinolaryngologist with late presentation. The prevalence in this study was 5.9%. Causes were preventable with resulting permanent hearing loss. Universal neonatal hearing screening should be made mandatory, available and affordable. Facilities for cochlear implant should be made available and affordable in referral center.