Prevalence of tinnitus in patients with different temporomandibular disorders symptoms

Methods: The presence of self-reported tinnitus was assessed in 250 consecutive TMD patients and correlation analysis was performed with clinical TMD signs and symptoms.

Conclusions: Any correlation patterns were shown between tinnitus and TMD. Age-stratified analysis suggested possible hypotheses for a symptom-specific clinical correlation that should be assessed with future research.

Temporomandibular disorders (TMD) are a heterogeneous group of conditions involving the temporomandibular joint (TMJ), the masticatory muscles, and the related structures [1]. The main signs and symptoms include pain in the jaw muscles and/or the TMJ area, joint sounds, and limitations in jaw range of motion [2]. Along with the above, ancillary symptoms may be present in near as well as far districts, such as the neck region [3]. Among those, ear symptoms such as tinnitus, vertigo, otalgia are also sometimes referred by TMD patients [4].

Tinnitus is among the chief complaints characterizing ear disorders, and is deﬁned as an auditory phantom sensation experienced when no external sound is present [5,6]. It affects approximately 15% of the adult population, of which 2.5% refers a severely bothersome tinnitus [7]. It is a very disturbing noise, which is perceived in different ways at the individual level, ranging from the typical ringing sound that gave the name to the condition to a very variable extent of other sounds (e.g., hissing, roaring, buzzing) [8]. Current theories on the etiology of tinnitus suggest that a combination of neurological, anatomical, metabolical, and psychological factors may be responsible for the onset of subjective perception of tinnitus [9].

Some investigations suggested a frequent occurrence of subjective tinnitus in subjects with TMD, with up to more than one-third of TMD patients also reporting tinnitus [10,11]. Speculations about the possible causal relationship between the two conditions include various etiological theories on the origin of tinnitus in TMD patients4. In particular, it was suggested that bruxism-related muscle overuse may be responsible for an hyperactivity of the tension veli palati muscle and subsequent abnormal activity of the Eustachian tube [12]; also, it was hypothesized that ear symptoms in TMD patients may be due to the auriculotemporal nerve compression in TMJs with inflammatory-degenerative disorders [13]. Notwithstanding that, such theories have never been tested. Indeed, at present, very few data are available on the prevalence of tinnitus with respect to the specific TMD condition, thus not allowing to verify the existence of an association, if not a causal relationship, between the two conditions. The only available paper on the issue reported the absence of clinical differences in the prevalence of tinnitus in subjects with myogenous vs arthrogenous TMD [14]. However, data are lacking as far as the specific diagnoses are concerned.

Based on these premises, the present investigation aimed to compare the prevalence of tinnitus in TMD patients affected by either jaw muscle pain, TMJ internal derangements (i.e., abnormalities of the disc-condyle relationship), or TMJ arthrosis.

Participants to the study were 250 consecutive patients (58 females; mean age 49.3±13.5 years) attending the Temporomandibular Disorders Clinic, Section of Maxillofacial Surgery, Department of Neuroscience, University of Padova, Padova, Italy during the first six months of the year 2013. They underwent a thorough TMD assessment according to the current standard of reference approach for TMD diagnosis [15,16], performed by one of the two leading investigators (D.M.; L.G.N.) with expertise and training in previous multicenter studies adopting the same classification systems [17,18]. As part of the history taking procedure, all subjects were asked to self-report the presence of tinnitus.

Based on the study hypothesis about their possible association with tinnitus, the following TMD signs and symptoms were recorded:

The prevalence of self-reported tinnitus was cross-tabulated with the above clinical TMD signs and symptoms. Based on recent suggestions that specific age-related patterns of symptoms may be identified in TMD patient populations [19,20], age-stratified crosstabulations were also performed. To that purpose, four age groups based on 25th, 50th, and 75thage quartiles were identified. For the overall sample as well as the different age groups, the Phi coefficient was calculated to assess the correlation between tinnitus and the various TMD signs and symptoms. Suchcoefficient, which is a measure of the degree of association between two binary variables and which is similar to the correlation coefficient in its interpretation, provides values ranging from -1.0 to +1.0, indicating different levels of negative or positive correlation. As a general rule for correlation analyses, values higher than 0.7 are considered supportive of a strong positive correlation [21]. Significance level for Phi test was set at p < 0.05. All statistical procedures were performed with the software SPSS 21.0 (IBM Statistics, Milan, Italy).

All subjects gave their consensus to the study procedures and the study design was approved by the University of Padova’s IRB.

Twelve patients did not have any of the signs and symptoms under investigation, and were thus excluded from further analysis. Masseter pain was diagnosed in 57.5%, TMJ signs of disc displacement and effusion in 76 %, and clinical signs of arthrosis were present in 43.6% of patients. Subjective tinnitus was reported by 30.4% patients. 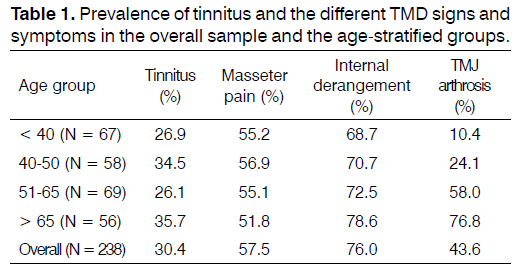 Table 1: Prevalence of tinnitus and the different TMD signs and symptoms in the overall sample and the age-stratified groups. 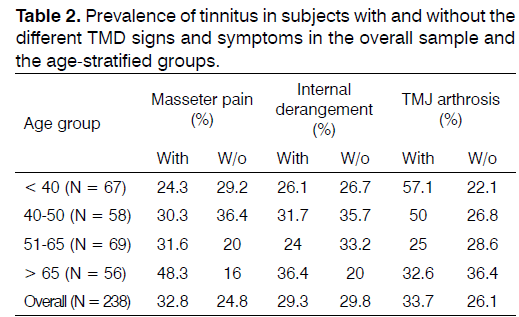 Table 2: Prevalence of tinnitus in subjects with and without the different TMD signs and symptoms in the overall sample and the age-stratified groups. 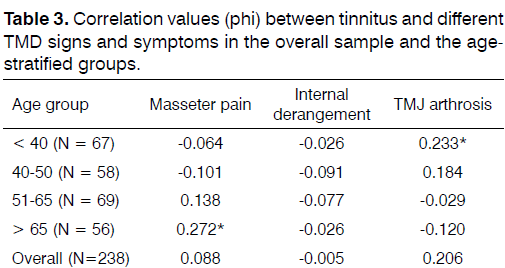 Table 3: Correlation values (phi) between tinnitus and different TMD signs and symptoms in the overall sample and the agestratified groups.

The association between ear symptoms and disorders of the temporomandibular joint has been hypothesized since the early theories of Costen [22]. Despite the purported mechanisms underlying such association, which called into cause a potential posterior condylar displacement due to abnormalities of dental occlusion, did not stand up to time scrutiny [23,24], it is a common clinical observation that TMD patients may also have some ear symptoms, such as tinnitus, vertigo, and otalgia. Literature data suggested that such otologic complaints are more prevalent in TMD patients than in those without TMD [25,26]. In particular, a recent investigation showed that prevalence of tinnitus was eight times higher in TMD than in non-TMD subjects [11]. Notwithstanding that, only a few studies assessed the prevalence of tinnitus in the different subgroups of TMD patients [14]. Indeed, recent studies suggested that the epidemiology of the different temporomandibular disorders should be studied separately, due to the possible identification of specific risk factors and age-related features [19,27]. Based on that, it was interesting to assess if the association between tinnitus and TMD may be symptom-specific, viz., is there a different frequency of subjective tinnitus in patients with different TMD signs and symptoms?

The prevalence of tinnitus in the overall study group was 30.4%, and it did not show any age-related prevalence pattern, with prevalence ranging from 26.1 to 35.7% within the four age groups. Such findings are comparable with literature reports, suggesting a very variable frequency of subjective tinnitus in TMD patients, ranging from 31% to 64.1% [10,11,24,25]. As for TMD signs and symptoms, their prevalence was obviously high (43.6-76-0%), as expected on the basis of the study population. Age-related patterns were relevant as far as the higher prevalence of TMJ arthrosis in the older groups was concerned. The prevalence of tinnitus was higher in subjects with (32.8%) than without masseter pain (24.8%) as well as in those with (33.7%) than without TMJ arthrosis (26.1%), whilst there was an almost overlapping prevalence between subjects with (29.3%) and without internal derangement (29.8%).

In general, the phi values for the correlation between tinnitus and the different TMD signs and symptoms were very low and not supportive of any relevant correlation. These data are also comparable with those from the only available investigation that specifically assessed the prevalence of tinnitus in different TMD subgroups, which did not report any significant differences between subjects with myogenous or arthrogenous disorders [14]. Another paper suggested that subjects with aural symptoms have a relevant risk for clinical findings of positive jaw muscle palpation, but specific information on the relationship between tinnitus and TMD findings was not provided [10].

Within these premises, our data allowed to get deeper into the assessment of the epidemiology of the tinnitus-TMD relationship. Indeed, interestingly, agestratified analysis showed that tinnitus was correlated with masseter pain in the older age group (>65 years) and with TMJ arthrosis in the younger age group (< 40 years).

Such findings may have important clinical implications, with particular regard to the possible mechanisms underlying a causal relationship between the two conditions. Indeed, it might be speculated that clinical findings of TMJ arthrosis in younger individuals may be a manifestation of such a severe, age-unrelated, TMJ degenerative disease that a more frequent involvement of ear structures occurs with respect to subjects with “age-related” TMJ arthrosis. On the contrary, the potential correlation of tinnitus with muscle pain in older subjects may be due to a chronic tension of jaw muscles, and the pterygoid muscle in particular, that provokes chronic hypertone and subsequent abnormal function of the small muscles regulating ear function. Of course, these speculations should be investigated with future studies.

In particular, based on these suggestions, the need emerges to take into careful account for the different epidemiological features of the various TMD symptoms. Indeed, the TMD literature has been providing several examples of the fact that considering “TMD” as a whole is not yet an acceptable strategy to try getting deeper into the analysis of risk and associated factors [28]. As a suggestion for the future, on the basis of recent suggestions about its influence on force distributions and symptoms’ features [27,29], skeletal features should also be assessed as a potential factor that may be involved in the pathophysiology of ear symptoms in TMD patients. On the other hand, it should be also pointed out that the adoption of subjective report as the only outcome measure for tinnitus, even if being the most suitable strategy to gather data on large samples, does not give any information on the actual pathophysiology of ear structures. In addition, a more detailed evaluation of the TMD-tinnitus association should comprehend the assessment of other ear symptoms that are potentially related with tinnitus (e.g., hearing loss, vertigo), so as to provide an exhaustive picture of the clinical reality. Based on that, it can be also recommended that, as soon as concrete study hypotheses are formulated, an objective assessment of both tinnitus (e.g., instrumental evaluation of ear functioning) and TMJ status (e.g., magnetic resonance findings) should be the most suitable strategy to finalize the researches on the topic.

Based on the suggested higher prevalence of tinnitus in TMD patients, and the unclear pathophysiology of the relationship between the two conditions, the present investigation aimed to get deeper into the argument by comparing the prevalence of tinnitus in TMD patients affected by either jaw muscle pain, TMJ internal derangements (i.e., abnormalities of the disc-condyle relationship), or TMJ arthrosis.

The prevalence of tinnitus in our TMD population was 30.4%, with an absence of significant patterns of correlation with TMD. Notwithstanding that, age-stratified analysis showed significant correlations of tinnitus with masseter pain in the older TMD patients (over 65 years), and with arthrosis in the younger TMD patients (under 40 years), thus providing possible hypotheses for a symptom-specific clinical correlation that should be assessed with future research.