Introduction: In congenital visual impaired individuals one modality is impaired (visual modality) this impairment is compensated by other sensory modalities. There is evidence that visual impaired performed better in different auditory task like localization, auditory memory, verbal memory, auditory attention, and other behavioural tasks when compare to normal sighted individuals. Objective: The current study was aimed to compare the temporal resolution, frequency resolution and speech perception in noise ability in individuals with congenital visual impaired and normal sighted. Methods: Temporal resolution, frequency resolution, and speech perception in noise were measured using MDT, GDT, DDT, SRDT, and SNR50 respectively. Twelve congenital visual impaired participants with age range of 18 to 40 years were taken and equal in number with normal sighted participants. All the participants had normal hearing sensitivity with normal middle ear functioning. Results: Individual with visual impairment showed superior threshold in MDT, SRDT and SNR50 as compared to normal sighted individuals. This may be due to complexity of the tasks; MDT, SRDT and SNR50 are complex tasks than GDT and DDT. Conclusion:Visual impairment showed superior performance in auditory processing and speech perception with complex auditory perceptual tasks.

The "neural Darwinism" theory predicts that when single sensory modality is not functioning, like congenital visual impairment, the target structures are taken over by the afferent inputs from other senses that will promote and control their functional maturation [1] . Individuals with congenital visual impairment have been found to show better performance in auditory perceptual task [2,3] and memory tasks [4] . The inter-aural time difference discrimination thresholds of blind individuals were significantly shorter than those with residual vision and controls [5] .

Temporal processing is an ability of an individual to perceive and process the modulated stimuli at a rapid rate, which facilitates the localization and lateralization of sound, hearing discrimination, and auditory pattern recognition. Temporal processing deficits include difficulty in comprehending speech in the incidence of background noise, difficulties in auditory performance with competing signals, difficulty in auditory performance with degraded acoustic signals, and difficulty following verbal direction [6] . Frequency resolution refers to the ability of the auditory system to discriminate and detach the spectral components in a complex sound. Peripheral auditory system is composed of bank of over lapping band pass filters [7] . Spectral ripple tests are commonly used to measure frequency resolution [8] . Spectral ripple discrimination threshold is a reliable non-linguistic measure of spectral resolution [9] .

Spectral processing and temporal processing is important to gather the available spectral information to understand the speech. In the presence of noise, normal hearing individuals have difficulty in understanding speech than in quite. This difficulty is due to the spectral overlying between the noise and speech, but this spectral overlapping is not completely overlapping so there is certain spectral information available for speech. If the visual input is absent, the person will rely upon one modality that is auditory modality. Few studies have suggested that localization and speech perception ability in individual with visual impairment are comparatively higher than the normal individuals [10,11] . There has been limited research done on temporal processing and frequency resolution in individuals with visual impairment. Hence the aim of the study was to assess the psychoacoustical measures (temporal processing & frequency resolution) and speech in noise score in individuals with congenital visual impairment.

There were two groups of participants in the study. First group was congenital visual impairment with normal hearing and the second group was control group which included participants with normal vision with normal hearing status. The present study adopted a cross sectional comparative study design. Each group consisted of 12 participants in the age range of 18-40 years (mean age 29.5), a total of 24 participants were included for the study purpose. All the participants had pure tone thresholds within normal limits that is 15 dBHL with air-bone gap less than 10 dB at octave frequencies between 250 Hz to 8000 Hz with A type tympanogram and acoustic reflexes present. Participants with previously diagnosed hearing problem (any type of hearing loss), diabetics, comorbid psychiatric or neurological diseases, cognitive deficits were excluded. Individuals with acquired visual impairment were also excluded from the study.

To measure the hearing threshold, calibrated diagnostic LADIE audiometer was used and to evaluate the function of middle ear GSI Tympstar was used. Using MATLAB version 7 software psychophysical and speech perception tasks were carried out. Stimulus for the task was presented through calibrated headphones using personal computer dell inspiron N5050. The entire psychophysical tests were done at participant comfortable hearing level. The psychoacoustic measures were obtained using different tests like Gap detection test (GDT), Modulation detection threshold (MDT), Duration discrimination test (DDT) and Spectral Ripple Discrimination Threshold (SRDT). For above mentioned tests the participants were informed to respond verbally. For speech perception in noise task, the participants were asked to repeat the sentences that were presented to them. For all tests adequate training was given prior to the testing to eliminate the bias.

SRDT stimuli with spectral ripples were created in MATLAB 7 environment. Amplitudes of the components were determined by a full wave-rectified sinusoidal envelope on a logarithmic amplitude scale. The ripple peaks were equally spaced on a logarithmic frequency scale. Bandwidth of the stimuli was in the100 to 5000 Hz range. Phase reversal test: Standard and inverted ripple stimuli were generated. For standard ripples, the phase of the full-wave rectified sinusoidal spectral envelope was created using ‘sin’ function; and for inverted ripples, it was ‘cos’ function. Two types of test stimuli were created using standard and reversed ripples; the ‘standardstandard’ ripple and the ‘standard-inverted’ ripple. For the standard-inverted ripple, there was a spectral change at 1s; whereas there was no spectral change for standardstandard stimulus. Participants were asked to identify the standard-inverted’ ripple stimuli from the signals. In spectral ripple, depending on number of ripples the ripple density increased, and when ripple density was more space between two consecutive ripples were less. As the density increases discrimination between standard and inverted ripple spectrum becomes difficult. That means as the spectral ripple threshold gets better, the discrimination performance enhances.

MDT was projected by using 2 alternate forced choice (AFC) methods along with adaptive 2 down 1 up procedure, which corresponds to 70.7% psychometric function [12] . The carrier frequency was 500 Hz and carrier wave was amplitude modulated at 8 Hz, 16 Hz, 32 Hz, and 64 Hz rates separately. The modulation frequencies that are important for speech perception are 8 Hz, 16 Hz, and 32 Hz. Duration was 500 ms for the stimulus. Participant had to identify the target interval which contains the modulated tone by responding verbally.

GDT was used to find the minimum gap needed to identify the signal as a two signals. The duration of the noise was 500 ms. Two signals were presented, one was standard and other was target signal, the standard signal duration was 500 ms and for target signals 500 ms with varying gap (20-1 ms) was presented. Duration of the gap in variable stimulus was adaptively varied using mlp procedure based on participant response. A two-interval alternative force choice procedure was used to track the threshold. Participant task was to identify the target signal containing gap by verbal response.

DDT was used to identify the signal with longest duration. The standard signal duration was 250 ms, total three stimuli were presented with one having longer duration compared to other two. The participants were instructed to identify the longest signal. The duration of the variable stimulus was adaptively changed using mlp procedure based on participant response. To track the threshold two intervals alternate forced choice procedure was used.

To identify the speech in noise quicksin protocol was used. This protocol had a list containing 7 sentences, with each sentence having varying signal to noise ratio (SNR) from 20 dB to -10 dB in 5 dB steps. Each sentence contained 5 key words presented with four talker babble noise. Participants were asked to repeat the keywords, the number of key words response was calculated. Quicksin is the standard method which gives information regarding SNR 50. In each participant SNR50 was calculated, that is minimum signal-to-noise ratio required for the participant to repeat 50% of the time words correctly.

Where, i = initial presentation level, d = step size, Correct = No of keywords correctly identified, w = no of keywords per SNR.

SPSS 16 (Version) was used to perform the statistical analysis. Independent ‘t’ test was used to compare between participants with congenital visual impairment and normal sighted participants. 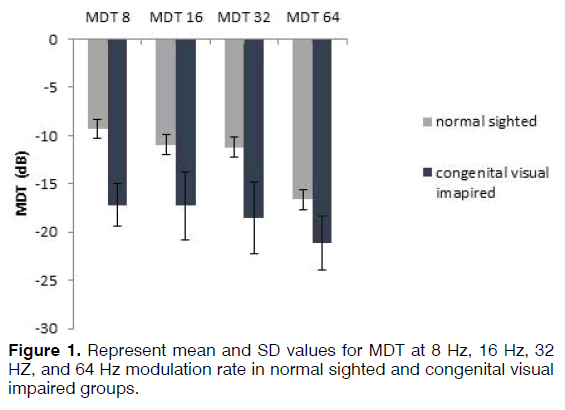 Results of current study indicates that there is no significant difference in DDT between congenitally visually impaired and normal sighted participants. Studies have proclaimed that based on complexity of the task, duration discrimination performance can vary [18] . The visually impaired participants having obtained excellent scores in perceptual auditory tasks, such as pitch discrimination or duration discrimination have been reported [3] . However, the simplicity of the task adopted in the present research would have resulted in contradictory observation.