Objective: Dizziness is a sensation of spatial disorientation of rotating or non-rotating in nature, mostly due to Oto-neurological insults. A symptom-specific dizziness handicap inventory may aid in understanding the severity of the condition and its impact on the quality of life. Therefore, the Dizziness Handicap Inventory-English version (DHI-E) was used as the most reliable subjective tool to assess the effect of dizziness in various aspects of life and so was translated into several languages. Hence, the present study aimed at developing and standardizing the self-administering Dizziness Handicap Inventory - Gujarati version (DHI-G). Methods: A cross-sectional survey design was performed. 50 participants, i.e. 18 males and 32 females aged between 15 to 55 years with complaints of vertigo/dizziness were recruited for the study. The questionnaire was re-administered to thirty of the total participants after 10 days of initial administration for examining test-retest reliability. Results: DHI-G achieved an overall alpha score of 0.92 suggesting good internal consistency and the score of 0.84, 0.82 and 0.81 on three subscales i.e. physical, functional and emotional respectively. Intra class correlation (ICC) revealed good test-retest reliability with a score of 0.81. Conclusion: DHI-G can be used as a reliable and valid tool in the clinical and research setting extensively

Dizziness may be defined as a wrong perception, an illusion, or a movement hallucination, a sensation of spatial disorientation of rotary (vertigo) or non-rotating (instability, unbalance, fluctuation, oscillation, oscillopsia) in nature, mostly due to the oto-neurological insults [1]. It has been commonly sighted among the patients diagnosed by the audiologist, physiotherapist, physician, neurologist and otolaryngologist [2-4]. It is found to be prevalent ranging between 8% to 18% in pediatric [5,6], 20-30% of adults [2] and 3% to 38% in geriatric individuals [7]. Dizziness, in spite of its severity, has a higher impact on the quality of life of individuals with balance and vestibular insults [8]. An individual suffering from chronic dizziness can lead to loss of independence with a reduced level of endurance [9]. There are many qualitative studies that have shown the impact of dizziness on day to day life, often leading to insecurity and fear, increased risk for falls, strokes, syncope and functional disability which may ultimately result in isolation and poor quality of life [10-14]. This might result in functional, psychological and emotional tribulations along with physical difficulties [15]. There are varieties of objective assessment tools to diagnose dizziness, but these techniques are not practical enough in quantifying the functional, emotional and psychological impact of the condition on daily living. This has encouraged many investigators to develop questionnaires for evaluating the quality of life of this individuals [16-18]. In 1990, Jacobson and Newman [19] designed and validated a specific questionnaire for dizziness, the Dizziness Handicap Inventory-English version (DHI-E) aiming at evaluating a subjective measure of the patient’s perception of handicap due to dizziness and also the effect of vestibular rehabilitation on individual’s physical, functional and emotional aspects of life. DHI-E contains 25 questions which are categorized into three subscales i.e. physical, emotional and functional, with the total score ranging from 0 to 100. DHI-E is one of the most reliable subjective tools in assessing the effect of dizziness in various aspects of life and therefore, the original American-English version has been translated and validated into several languages and cultures, such as Chinese, French, Brazilian, Arabic, German, Greek, Italian and Norwegian [17-26]. DHI-E is a reliable device in understanding the effect of oto-neurological rehabilitation programs [27-29]. In spite of its popularity as a common clinical tool, an equivalent version of the DHI-E is not available in any of the Indian languages except Kannada and Malayalam [18-30]. India is a multilingual country with multiple cultures and backgrounds. Large number of the population relies on regional languages for general communication which makes it impracticable to employ the inventory. Also, the inability of multilingual professionals in accurate and reliable translation of the DHI-E cannot be ignored. Hence, it is necessary to translate DHI-E into various native Indian languages such as Gujarati. According to the National Census (2011) [31], the population of Gujarat is reported to be 6.04 billion. But in reviewing the literature, a questionnaire of the Gujarati version to evaluate the self-perceived effects of dizziness is not available. Therefore, the present study aimed to translate, validate, and culturally adapt the DHI-E for application in the Gujarati-speaking population, and to analyse the test-retest reliability of the questionnaire in the Gujarati language.

Development of the inventory

In the current study, the DHI-E [19] was adapted into the Gujarati language with the permission of the corresponding author. The standard translation-back-translation method was utilized where two professors in the Gujarati language performed a forward translation of the questionnaire. For content validation, the translated version of the Dizziness Handicap Inventory-Gujarati (DHI-G) was then administered on 10 native literate Gujarati speakers (3 teachers, 4 audiologists and 3 linguists) whose first language was Gujarati. These documents were evaluated for any possible disparities. No considerable disparity in the structure and implication of the text was observed. Therefore, the back-translation of the questionnaire was done in English by an experienced English teacher with a Masters in arts to spot any inaccuracies if present in forward translation. Discrepancies noted, were discussed and further work was restated until a satisfactory version was obtained and agreed upon. Earlier to the release of the questionnaire, it was studied in five patients within inclusion criteria as a pilot study. An interview was conducted to check if the questionnaire was comprehensible and answerable. Therefore, few of the questions were reframed and accommodated into the final version of the questionnaire as given in Appendix 1. The summary of the translation-back-translation procedure used in the study is shown in Figure 1. The DHI-G consists of 25 items designed to assess the self-perceived level of handicap due to dizziness. The items are grouped into emotional (9 items), functional (9 items), and physical (7 items) domains. Each item has 3 response options (yes, sometimes, and no), which were scored as 4, 2, and 0 points respectively. 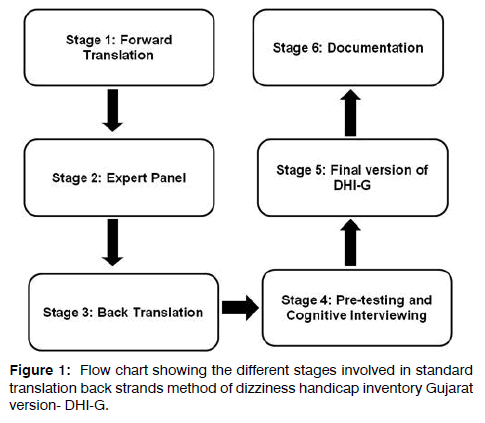 A total of 50 participants, i.e. 18 (36%) males and 32 (64%) females aged between 15 years to 55 years (39.4 ± 10.7 years) with complaints of vertigo/dizziness were recruited from the department of ENT and department of Audiology and Speech Therapy at C. U. Shah Medical College. Participants with any psychological and neurological problems were excluded from the study. Gujarati speakers, being able to speak and understand the Gujarati language, were included in the study

Informed consent was obtained from all the participants in the study. Participants were recruited based on the inclusion and exclusion criteria. The final version of the DHI-G questionnaire was administered. All of them were literate and could fill the questionnaire on their own. It was asked to read each question thoroughly and make appropriate responses, as per their perception of the condition.

To measure the test-retest reliability, the intra-class correlation (ICC) was utilized in the study where the questionnaire was re-administered to thirty (60%) of the total participants after ten days of the initial administration as the participants returned for follow up. Therefore, the obtained data were further considered for statistical analysis with SPSS software version 23 (IBM corporation, New York, US) to test the internal consistency and testretest reliability of the questionnaire

The total scores of the questionnaire ranged from 0 to 100 as rated by all the participants where the score of 0 revealed no perceived disability and 100 being maximum perceived severity due to the dizziness. To obtain internal consistency of the DHI-G, Cronbach’s alpha test and an item-total correlation was carried out. The DHI-G achieved an overall alpha score of 0.92 suggesting good internal consistency and the score of 0.84, 0.82 and 0.81 were obtained on three subscales i.e. physical, functional and emotional respectively. Table 1 represents the DHI-G with item-total correlation and Cronbach’s Alpha score for every 25 questions. The questionnaire was administered for the second time ten days later its initial administration on thirty (60%) of the total participants. ICC was performed for the total DHI-G scores between the first and second administrations of the questionnaire which revealed good test-reliability with the overall coefficient score of 0.81.

Dizziness is one of the frequently observed symptoms of oto-neurological conditions, adversely affecting social, emotional and professional well-being. Thus, to understand the severity of the condition and its impact on the quality of life, a symptom-specific questionnaire needs to be assessed. Moreover, the symptom-specific self-administering inventory provides insight into the impression of the problem by the patient himself, therefore, supporting the evaluation and potential rehabilitation of the same [19]. Therefore, the present study aimed at developing and standardizing the DHI-G which was administered to individuals with the complaint of dizziness/vertigo. Many of the patients reported impaired quality of life due to dizziness and were unable to focus on their routine life. Hence, it reveals the necessity to administer the selfperceived questionnaire in understanding the impact of dizziness on physical, functional and emotional aspects of life. Cronbach’s alpha was done to assess the internal consistency of the questionnaire. The results of the present study showed the global alpha score of 0.92 with an itemtotal correlation of 0.27 to 0.75 which is considered as excellent reliability. Our findings were relatively closer with DHI developed in other languages such as original DHI-E (α=0.89) [19], DHI-Arabic version (α=0.92) [22], DHI-Greek version (α=0.89) [24] and DHI- Italian version (α=0.92) [25] as given in Table 2. Likewise, studies conducted in other Indian regional languages such as Kannada and Malayalam revealed overall Cronbach’s alpha score of 0.74 and 0.94 respectively, which were accepted with the present findings [18-30]. The present study also attempted to understand the effect of dizziness under three subscales: physical, emotional and functional. The scores of 0.84, 0.82 and 0.81 were obtained on individual subscales of physical, functional and emotional respectively. Our findings were similar to with DHI developed in other languages such as DHI-English version (alpha scores for functional, physical and emotional as 0.85, 0.78 and 0.72 respectively) [19] DHI-Arabic version (alpha scores for functional, physical and emotional as 0.87, 0.81 and 0.79 respectively) [22], and DHI- Italian version (alpha scores for functional, physical and emotional as 0.92 and 0.82, 0.75 and 0.84 respectively) [25], as given in Table 2. Therefore, the present study was found to have good reliability and internal consistency with alpha values similar to those with the original DHI- English version and other languages. In the present study, the ICC administered to understand the test-retest reliability revealed the significant total score which was relatively closer with DHI developed in English (r=0.97) [19], Greek (r=0.93) [24] and Norwegian (r=0.90) versions [26]. Even with a good ICC coefficient in the present study, 40% of the total participants did not appear for follow up. A similar response rate has been reported in earlier studies and is comparable [20-32]. Due to the unavailability of other self-administering dizziness inventory in the Gujarati language, construct validity was achieved by correlating the overall score with the total score of each subscale (physical, functional and emotional). Therefore, the significant correlation (p=0.00) was found across scores, suggesting the consistency of subscales to assess the impact of dizziness.

Table 2: Cronbach’s alpha coefficient of DHI-Gujarati version being compared with other four different versions of DHI.

In a multilingual and multicultural country like India, a large number of the population depends on regional language for general communication, making it impracticable to employ DHI- E in understanding the severity of the dizziness. Hence, the developed and standardized DHI-G can be self-administered on native Gujarati speakers with dizziness for assessing the impact of the condition in daily living. The present study confirmed that the DHI-G has good internal consistency and reliability as compared to the original English version and other established versions. Therefore, the DHI-G can be used as a robust, easy to use, reliable and valid tool in self-assessment of the dizziness handicap in clinical as well as research setting. Test-retest reliability is in agreement with earlier studies and thus allows for its extensive application.

The Author declares no potential conflict of interest on publishing this paper.