Risk of hearing alterations in newborns of mothers treated for malaria

Introduction: The antimalarial drugs can cause irreversible sensorineural hearing loss, and chloroquine phosphate use can be ototoxic to the fetus. Objective: To compare the results of hearing screening in newborns of mothers treated for malaria in pregnancy with the results of newborns of mothers untreated and check for increased risk of hearing alterations in the group exposed to treatment.

Method: Retrospective cohort study which involved 284 infants, 30 in the exposed group to malaria treatment and 254 in the unexposed group, matched for gestational age, birth weight and risk indicators for hearing. They underwent hearing screening by means of transient evoked otoacoustic emissions and/or auditory brainstem response automatic. The variables were collected in an interview with the parents in the health record and the screening database. Results: The prevalence of fail in exposed group (6.7%) was significant when compared with the unexposed group (1.2%). The risk of failing in the hearing screening in the exposed group was 5.64 (CI 1.17 to 27.3).

Conclusion: Newborns of mothers treated for malaria in pregnancy had a prevalence of fail in hearing screening at 6.7% and 5.64 higher chances to fail than newborns of untreated mothers.

Hearing is one of the main individual means of contact with the outside world, playing a key role in their integration with society[1]. It allows the processing of acoustic events like speech, making possible to communicate with the expression of thinking[2]. Therefore, the hearing is in a precondition for the acquisition and development of language[3].

A child in acquiring your functions phase uses the language to organize your universe, understand the surrounding world, understand each other, transmit and abstract thoughts and feelings, interact with environment and acquire knowledge. In a child with hearing loss, the inability to communicate, can become an introverted individual, with problems of nervous origin, and end up isolating themselves from the surroundingworld because not understanding and not being understood[4].

There are several risks to which it is exposed the child’s hearing, when they were present in the pre, peri and post-natal. Some congenital infections have been described as high risk for hearing loss in childhood, such as toxoplasmosis, rubella, cytomegalovirus, herpes simplex and syphilis[5]. Malaria is an infection with risk of vertical transmission and important cause of mortality in the neonatal period and can lead to severe damage to the fetus[6].

Malaria is described as infectious disease caused by the plasmodium parasites, transmitted in nature by the bite of infected mosquitoes Anopheles type. It is considered one of the major public health problems because the plasmodium are found in an area which is home to nearly half the world’s population and when it occurs during pregnancy is responsible for broad spectrum of complications [7].

Currently in Brazil, malaria transmission is basically restricted to the Legal Amazon (Acre, Amapá, Amazonas, Maranhão, Mato Grosso, Pará, Rondônia, Roraima and Tocantins), and Rondônia is among the four states where it has the highest incidence[8].

The effects in newborns of mothers infected with malaria in pregnancy have been insufficiently studied and so far it has been suggested that infection with Plasmodium Vivax is associated with low birth weight[9].

Another effect that is insufficiently studied is the ototoxic potential of the drugs used to treat malaria. These drugs can cause irreversible sensorineural hearing loss10 and it was shown that chloroquine phosphate use in the third quarter can be ototoxic to the fetus [11]. In other national studies, the authors identified cases of hearing loss in newborns of mothers infected with malaria during pregnancy[12,13].

Since hearing loss can be extremely harmful to children’s development and the lack of studies investigating the ototoxic effect of antimalarial drugs, it was necessary to conduct this study, which aimed to compare the results of newborn hearing screening (NHS) of newborns of infected mothers and treated for malaria in pregnancy with results in newborns from uninfected mothers.

This study is part of a project entitled “Study of hearing in a neonatal hearing screening program in the Amazon region”, which was approved by the ethics committee on human research under the number 567/11. Parents whose newborns were part of this study, agreed to participate by signing the consent form.

This is an observational analytical study of retrospective cohort.

Data collection occurred in the NHS program conducted in a tertiary referral hospital in the care of pregnant women and newborns at high risk of Porto Velho (Rondonia), from February 2011 to February 2013.

The sample set to convenience or consecutively was estimated from the number of live births in the hospital where the study was conducted in the years 2011 and 2012, which was 6249 newborns. So we were using the sample calculation and adopting an error of 5% and 90% confidence level was reached on a minimum sample size of 260 newborns.

Newborns that participated in the study whose progenitors were infected with malaria during pregnancy and underwent treatment with antimalarial drugs (exposed group) and newborns of progenitors not infected by malaria in pregnancy who did not undergo treatment with antimalarial drugs (unexposed group). To be part of the study the newborn should have been submitted to the NHS and their parents or guardians should agree by signing the consent form.

To achieve the expected number in the sample were invited to participate in the study 335 parents and their newborns. However, 51 were excluded, 37 because they have not completed the NHS process, 13 due to the absence of the variables of interest (birth weight and/or gestational age) in the chart of the newborn, and a foreign mother newborn because of the difficulty for communication. Therefore, the sample consisted of 284 newborns, these 30 made up the exposed group and 254 non-exposed group.

The variables of interest in this study were collected in health records of mothers’ and/or interview with the mother or guardian, in their health records of newborn screening and database. In the chart and/ or interview with the mothers’ or guardians there was the history of infection and treatment for malaria during pregnancy, type of plasmodium, type of antimalarial drugs and trimester she started treatment. In addition, there was the occurrence of risk factors for hearing loss (RFHL)[5] such as toxoplasmosis infection, rubella, cytomegalovirus, herpes, syphilis and family history of hearing loss in childhood. In the health records of newborns, it was verified the gestational age and birth weight, as well as occurrence of RFHL[5], stay in neonatal intensive care units, use of ototoxic drugs, mechanical ventilation, extracorporeal membrane oxygenation, hyperbilirubinemia with serum level requiring exchange transfusion, syndrome associated with hearing impairment and craniofacial malformations. In the NHS database (HITRACK SOFTWARE 3.5) were verified the tests and their results (pass or fail).

The NHS program from hospital where the study was conducted following the protocol suggested by the Support Group Universal Newborn Hearing Screening [14]. Screening is performed by electrophysiological measurements with transient otoacoustic emissions (TOAE) and/or automatic auditory brainstem response (AABR). Newborns considered low risk (without RFHL) for hearing loss are submitted to NHS through TOAE and high risk (with RFHL) are screened using the combined technique of TOAE/AABR. In this program, as a criterion of the service itself, newborns of infected pregnant women for malaria during pregnancy, are also screened with use of the protocol for high-risk newborn hearing loss.

The equipment used by the NHS service to the research of TOAE and AABR is the automatic model portable MADSEN AccuScreen®, GN Otometrics. Initially, all newborns were tested for TOAE and following (after fixing the electrodes) the AABR was tested in the group exposed and unexposed in newborns identified as high risk for hearing loss in childhood, according to program protocol.

To perform the TOAE, the equipment has been calibrated by the manufacturer for automatic analysis of responses to the following parameters: evaluation by binomial statistics; stimulus type nonlinear click a sequence with 60 Hz speed; intensity of 70-84 dB SPL (45-60dB NS); frequency spectrum from 1.5 to 4.5 kHz; artifact lower than 20%. When parameters have been achieved the record “pass” was obtained.

In the record of the AABR, after checking the impedance of the electrodes (acceptable < 12 KOhms), the equipment made automatic analysis of responses with considering the following parameters: evaluation by binomial statistics; click stimulus of about 80Hz speed and intensity of 35 dB NS. When the optimal parameters were achieved, the equipment recorded “pass”.

For purposes of this study, it was analyzed data only include the detection (pass/fail) of hearing loss, ie, the NHS.

After the formation of the groups and to ensure that they were matched on possible confounding variables (gestational age, birth weight and risk factors for hearing loss in childhood), they were compared for mean gestational age and birth weight through the ANOVA test and on the frequency of risk factors for hearing loss in childhood through the equality test of two proportions. It was observed that the pairing of the groups regarding gestational age and birth weight were no significant differences (P = 0.151 and 0.455, respectively). Besides having low coefficient of variation which showed that the sample is homogeneous (Table 1).

Table 1: Comparison of weight and gestational age in newborns of infected mothers and treated for malaria in pregnancy and newborns of mothers not infected during pregnancy.

Also, significant difference was not detected between groups with RFHL, but it was identified a case of craniofacial malformations in the exposed group, significant compared with the group not exposed (Table 2). However, this particular case did not present altered results in the NHS. 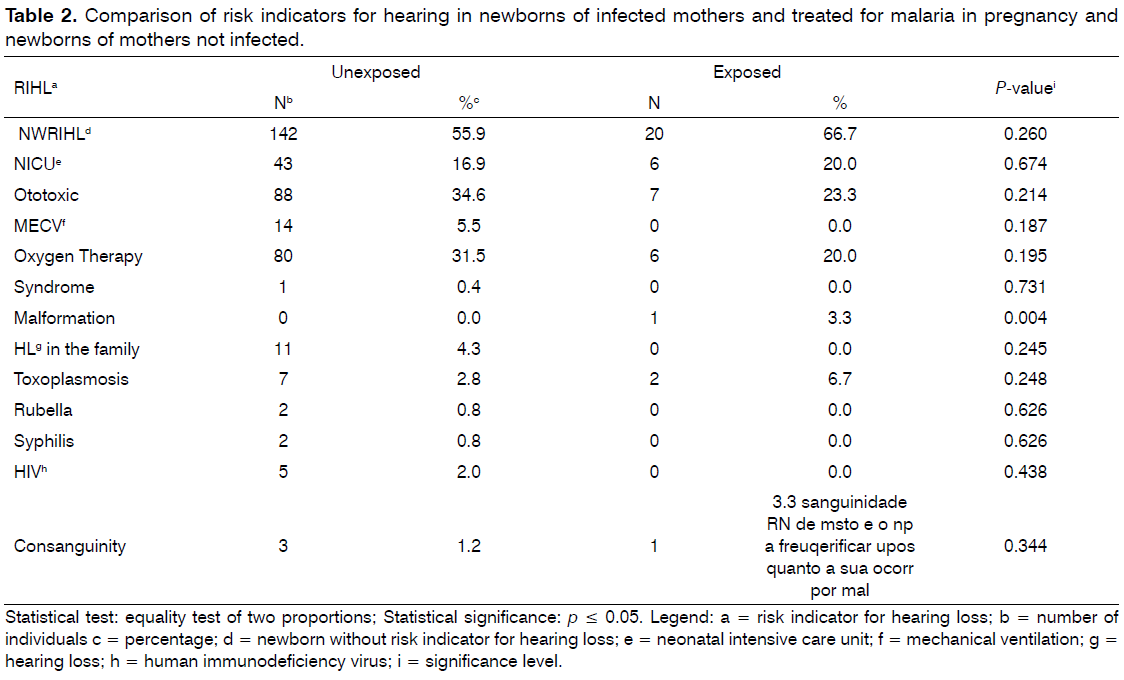 Table 2: Comparison of risk indicators for hearing in newborns of infected mothers and treated for malaria in pregnancy and newborns of mothers not infected.

To achieve the proposed objectives in this study, after the composition of the groups they were compared for NHS results. For this analysis we used the equality test of two proportions. Finally, it has been found the relative risk in exposed group of the NHS fails.

The comparison between the result of the NHS (pass/fail) between the exposed and unexposed groups to malaria during pregnancy and their treatment, there was significant difference (P-value = 0.031) and the risk of fail in the exposed group was 5.64 (CI = 1.17 to 27.3) (Table 3).

Table 3: Comparison of result Pass/Fail in hearing screening in newborns of infected mothers and treated for malaria in pregnancy and newborns of mothers not infected.

Symptoms of ototoxicity related to Chloroquine Phosphate are similar to those caused by aminoglycosides[12] and these can cause permanent hearing loss in later onset [5]. These statements and the fact that malaria during pregnancy associated with prematurity increases the chance of the child present alteration in the development [25] makes us conclude the need to monitor the hearing of this population with early identification of the occurrence of hearing loss and/or alteration in development hearing.

An important limitation to conduct this study was the low number of scientific publications related to the theme, besides the fact of not using methodologies recommended for the investigation of hearing loss in newborns and when used the correct methodology, the studies were merely descriptive.

Thus, it is concluded that newborns of mothers treated for malaria in pregnancy have prevalence of fails the hearing screening at 6.7% and 5.64 higher chances to fail in screening than newborns of untreated mothers. Considering the impact that hearing loss causes in child development and the high incidence of malaria worldwide, more studies are needed that rejected or proved the relation between the use of antimalarial drugs during pregnancy and the development of hearing alterations in newborns, in order to prevent or identify earlier this alterations.