Ten Years Follow Up of Patients with Tinnitus and Normal Hearing

Objective: To describe the natural history of tinnitus in normal hearing patients.

Study Design: This is a prospective longitudinal observational study.

Methods: In 2009 we studied 68 patients with significant tinnitus and normal hearing (Study Group-SG) compared to 46 patients with normal hearing and no tinnitus (Control Group-CG). We have been able to contact and recruit 24 patients from SG (35.3 %) and ten patients from CG) (21.74%) in 2019. Both groups were submitted to conventional audiometry, Distortion Product Otoacoustic Emissions (DPOAE), Tinnitus Handicap Inventory (THI), Visual Analog Scale (VAS) and Beck`S Depression and Anxiety Scales (BDS, BAS). These measures were compared with the same ones performed ten years ago in the same groups of patients. The software SPSS for windows version 21 was used. P values <0.05 were considered significant. Student t test was used to compare SG and CG results in 2019 and to compare 2009 and 2019 outcomes.

Conclusions: These results suggest that outer hair cells lesions are not the only determinant for tinnitus and hearing loss development

Otoacoustic emissions [1] and auditory brainstem responses [2] were used to study the electrophysiology of tinnitus in normal hearing patients. Tinnitus Handicap Inventory (THI) Visual Analog Scale (VAS) the Beck’s Depression Inventory (BDI) and Beck’s Anxiety Inventory (BAI) were used to test the correlation between tinnitus annoyance and depression-anxiety disorders [2,3]. Both groups had normal hearing between 250 and 8000Hz.

The correlation of tinnitus with abnormal Distortion Product Otoacoustic Emissions (DPOAE) results was demonstrated in SG [1]. Although the averages obtained in the ABR results from the patients with and without tinnitus and normal hearing were within normal limits, tinnitus group presented a significant prolongation of the latencies and some interpeaks, suggesting that ABR might contribute to the workup of these patients [2]. Correlation of tinnitus with depression and anxiety was also documented [3,4].

In 2019 we were able to contact 24 patients from the SG and 10 individuals who were part of the CG in 2009. We decided to submit these patients to the same tests and questionnaires employed in the first project, compare the 2 groups (SG/CG 2019) and then compare these results with the ones obtained 10 years ago.

In this way we would describe the natural history of tinnitus in normal hearing patients along a ten years’ time interval. This communication describes the results of this project.

The study was conducted at the Unit of the Institute of Strategic Management of the Federal District (IGES-DF), Brasilia-DF, Brazil. It was approved by the Research Ethics Committee of that Institution, under approval number 16205019.2.0000.8153, and with the signature of the Free Research Informed Consent Form by the participants.

All patients from both groups were submitted to tonal and vocal audiometry and Distortion Product Otoacoustic Emissions (DPOAE) tests. Tinnitus annoyance was quantified using Visual Analog Scale (VAS) and Tinnitus Handicap Inventory (THI) questionnaire. Level of Depression and Anxiety were measured by Beck`s Depression and Anxiety Inventories (BDI and BAI).

PSS software version 21 for windows was employed for statistical analysis. In order to compare DPOAE median results with the THI scores presented by categories between SG and CG Student`s T Test was used.

In order to compare the 2019 results with the ones from 10 years ago the median differences between them in each exam were tested using the Student`s T Test. Chi-squared test was employed to verify associations between categorical variables and results of THI, BDI and BAI presented as categories.

There were no significant differences between SG and CG regarding age and sex neither in 2009 nor in 2019.

Table 2 shows that there were no significant variations in tinnitus annoyance measured by VAS between the 2009 and the 2019 SG. One patient in SG reported that tinnitus was no longer present. None of the ten patients in CG had developed tinnitus in ten years.

Table 2: Difference between tinnitus intensity, annoyance and impact in the period between 2009 to 2019 according to VAS.

When we measured tinnitus annoyance using THI no significant differences were found between the 2009 and the 2019 study. In other words, the symptom had not progressed nor regressed significantly during ten years follow up. 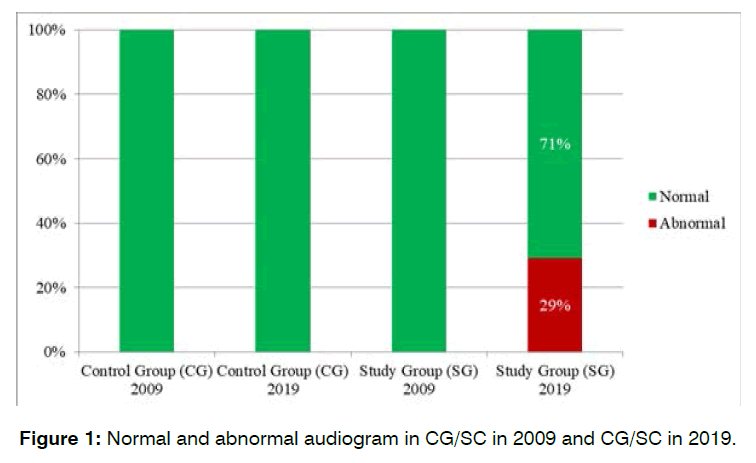 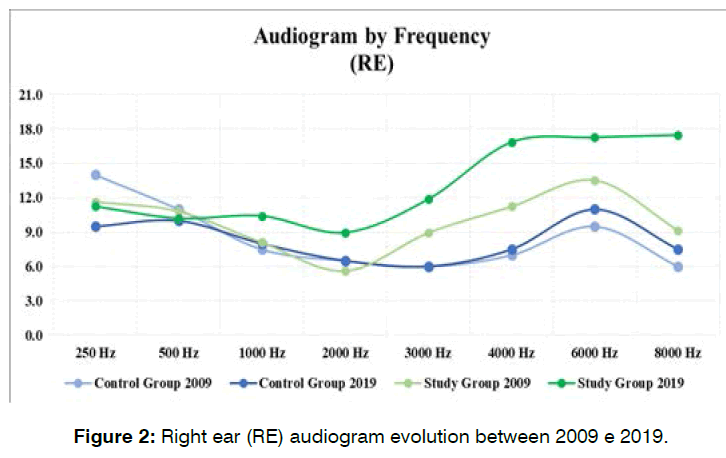 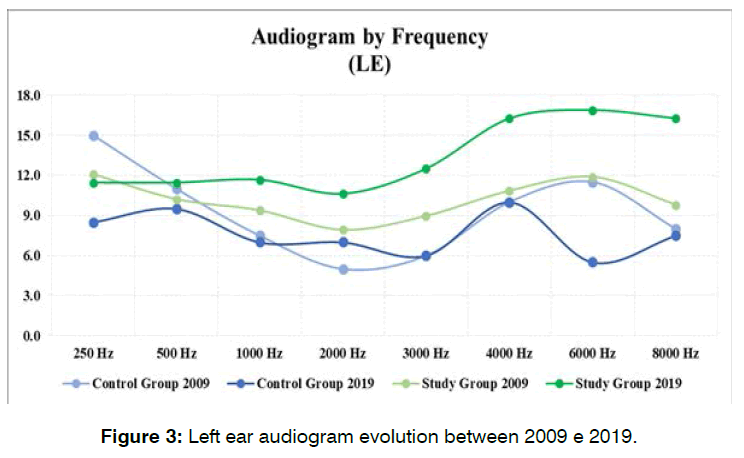 Description of DPOAE evolution from 2009 to 2019 is showed in Table 3. The greatest frequency of abnormal results in SG and CG was found in 8000Hz.

This is a prospective longitudinal study that evaluates part of the same group of patients with tinnitus and normal hearing at two different times, 2009 and 2019, an interval of 10 years. We know that when placed in a soundproof booth 94% of randomly chosen people will notice tinnitus but as a transient symptom [4]. In turn, in this study the tinnitus symptom was important enough to motivate the patients to seek medical advice.

In 2009, we found more abnormal DPOAE results in normal hearing patients with tinnitus (SG) when compared with normal hearing people without tinnitus (CG) [1], so, we concluded that outer hair cells lesions were probably the starting point of tinnitus. In another study, Brainstem auditory responses also showed clear differences between patients with (SG) and without (CG) tinnitus and normal hearing, although within normal limits, tinnitus group presented a significant prolongation of the latencies and some interpeaks, suggesting that ABR might contribute to the evaluation of these patients [2]. The same authors demonstrated in another research, a positive correlation between DPOAE results, annoyance of tinnitus and levels of anxiety and depression in normalhearing patients with tinnitus [3].

In 2019 we were able to recruit only 24 of the 68 original patients from the original SG of 2009 and 10 of the original 46 patients of CG. Brasília usually receives many patients from out of state and most do not have the financial means to travel frequently for medical appointments, when they get a cost allowance from the government, which involves a lot of bureaucracy and available funds. Some changed address and phone numbers and were not reachable. This was the main reason our SG and CG were much smaller in the present study.

We decided to submit these groups of patients to the same protocol we used in 2009 trying to answer the questions: what happened to tinnitus in SG during a ten years’ time? Did any of the CG participants develop tinnitus? What happened to the hearing level of the participants in the SG and CG?

No one in the CG developed tinnitus from 2009 to 2019. One patient in the SG stated tinnitus was no longer present. Tinnitus annoyance measured by THI did not change significantly during ten years follow up. Depression and anxiety have been shown to commonly accompany tinnitus [5,6], correlating moderately with tinnitus-related distress [7] Correlation of THI results with BAS results were negative in 2009 and positive ten years later. THI results and BDS scores were positively correlated both in 2009 and 2019. Levels of anxiety varied much more between 2009 and 2019 than those of depression. In 2019 29.2% of SG patients had sensorineural hearing loss while CG patients had normal hearing. DPOAE tests results were worse in 2019 than in 2009 in both SG and GC patients. CG had slightly worse results than SG.

Why did 2009 CG patients not develop tinnitus nor hearing loss even though the results of DPOAE were worse in CG than in SG ten years later? These results strengthen the notion that, outer hair cells lesion alone, may not always lead to tinnitus and/or hearing loss detected by standard pure tone audiograms. Other mechanisms are probably involved as well. As standard pure tone audiograms only sample at octave or inter-octaves and do not test higher frequencies, they potentially can miss lesions between the tested frequencies or frequencies above 8000Hz.

These findings agree with Jastreboff’s theory proposed in 1990. Tinnitus starts in the cochlea and is modified in the central pathways where it can become a very intense and disturbing symptom associated with emotional and autonomic pathways [10].

Hearing loss does not seem to be related to outer hair cells lesions alone, for in the present study, DPOAE results in 2019 were slightly worse in CG compared to SG. In a temporal bone research, Oliveira, Schuknecht and Glynn [11] found that the majority of temporal bones of patients who complained of significant tinnitus during life had normal histology. Unfortunately, the audiograms of these patients were not studied.

Recently Viana et al [12] showed that synaptic changes precede lesions of the organ of Corti and explains sensorineural hearing loss in the absence of inner hair cells lesions (hidden hearing loss). This may be the case here.

There are limitations of this work that must be addressed: High frequency audiometry (above 8000Hz) was not performed because it was not available to us in 2009. It is now well known that patients with tinnitus usually have hearing loss when these higher frequencies are tested [14-18]. This test would probably enhance our results.

There was a large loss from 68 to 24 patients in SG from 2009 to 2019. These 24 patients were the ones we were able to contact, as explained earlier. In other words, they were not selected, but randomly picked up. As the SG in 2009 was homogenous regarding age and sex we believe these 24 patients do represent the original group. Also, we were able to contact only 10 of the 46 original patients from the 2009 CG. As a voluntary control group, many were not willing to go to the hospital for the tests, claiming that they did not have time, even after being informed about the relevance for the study. This group was also homogenous as far as age and sex were concerned, and they were all healthy. Both groups were composed of middle-aged adults and tinnitus annoyance in SG was predominantly mild to moderate (VAS 5 to 7), enough to induce the patients to search for medical attention.

Because of the small size of the samples, parametric tests could not be appropriate for the statistical analysis. We therefore also ran paired tests to see if the results would be different. Paired tests results were no different from the ones obtained with the parametric tests (data not shown). A recent review19 brings together relevant studies about tinnitus, covering from its generation mechanisms, epidemiology, evaluation, and treatment development, aiming to highlight the main challenges and provide suggestions for further research. One of the obstacles in understanding and unveiling tinnitus is the difficulty of achieving studies with a larger number of patients.

Inner hair cells and their synapses should be looked upon in the future (hidden hearing loss in search of the cochlear trigger of tinnitus.

Our results must be confirmed by prospective studies involving larger samples because of the shortcomings discussed above.