Tympanic Membrane (TM) perforation is one of the common reasons of patients’ attending to Otolaryngology clinics. Prevalence of TM perforation has not been mentioned in previous studies. Most of acute and traumatic cases heal spontaneously. In cases that healing does not occur within three months, it is predicated as chronic TM perforation and needs surgical intervention [1].

Common TM perforation causes include trauma, middle ear infection, fungal infection of ear canal and Eustachian tube dysfunction. Recurrent otorrhea, hearing loss and cholesteatoma are among common complications of chronic TM perforation [2]. Tympanoplasty is a surgical method for eradication of infection and maintaining middle ear function. Temporalis muscle fascia is a common material used in tympanoplasty since 1960; however there are other available materials such as areolar tissue, vein, fat, perichondrium and periosteum [2].

According to necessity of TM perforation repair, minimally invasive methods have an important role especially in patients who cannot undergo general anesthesia or do not prefer it. These methods can be used for stable, uninfected and relatively small perforations using gelfoam, hyaluronic acid film (Epidisc) and cigarette paper [2,3]. Previous studies have proposed various materials such as paper patch, hyaluronic acid fat, basic-fibroblast growth factor (b-FGF), platelet-rich fibrin and platelet-rich plasma (PRP) for TM repair with a variety of complications and success rates [4-8]. Thus in the present study we aimed to evaluate the effect of PRPenriched gelfoam on the healing of chronic TM perforation in comparison with gelfoam alone.

This double-blind randomized clinical trial was registered in ethics committee of Baqiyatalllah University of Medical Sciences (Reference code: IR.BMSU. REC.194.168) and Iranian Registry of Clinical Trials (Reference code: IRCT2016083017413N16). Patients with chronic TM rupture attending to Otolaryngology clinic of Baqiyatallah Hospital (Tehran, Iran) between February 2015 and January 2016 were assessed for eligibility. Figure 1 shows a flowchart of trial. After confirmation of diagnosis, patients between 18 and 60 years of age who were candidates for type I tympanoplasty were enrolled in the study. Size of perforation was measured using variable hooks. Patients with active otorrhea, cholesteatoma, canal stenosis, TM perforation more than 5 mm, autoimmune and hematologic diseases, active neoplasm, immunosuppressive treatment and diabetes as well as smokers were excluded from the study. A written informed consent form was obtained from all patients. 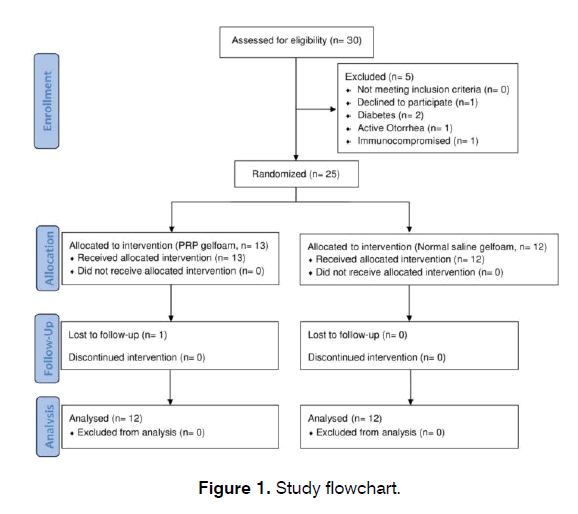 Patients were randomly allocated to two groups; intervention group underwent tympanoplasty with platelet rich plasma (PRP)-enriched gel foams and control group underwent operation with conventional gel foams alone. After transferring the patient to operation room and before presence of surgeon, 8 ml of blood was obtained from patient’s brachial vein in intervention group and was stored in PRP kits (RegenKit BCT). Samples were centrifuged in room’s temperature by 3000 rounds/min in 5 minutes then 3 ml of the resulting solution was disposed from the top of the kit. Based on factory’s instruction, the remaining solution was shaken for obtaining 1 ml of high density and homogenous PRP. In the following, small (1 and 2 mm) and two large (1 to 2 mm more than size of perforation) gel foams were prepared and enriched with PRP in galipot. In control group gel foams were impregnated with normal saline for blinding purpose. Then surgeon, who was not aware of added material to gel foams, was paged to the OR. After convenient prep and drep 1 ml of Lidocaine 2% was injected to ear canal using insulin syringe. Following anesthesia, sharp rosen was used for trimming of TM perforation margins and gel foams were put in the middle ear. Then one of the large gel foams was located in middle ear, under TM, and another one was fixed in ear canal on the TM. Ear canal was filled with small gel foams and Tetracycline mesh and wound dressing was done using one gauze and surgifix. After operation, patients were visited in recovery room and were discharged with oral cephalexin.

In the first post operational visit, three days after intervention, wound dressing and mesh were disposed. Patients’ information was recorded 4 and 12 months after surgery and underwent analysis by a statistician who was not aware of the group allocations.

In intervention group 5 (41.67%) and in control group 3 (25%) patients had underlying diseases like hypertension, hyperlipidemia, benign prostatic hyperplasia and hypothyroidism. None of the patients had diabetes mellitus. There was no significant difference for underlying disease between two groups (p = 0.653). There were no smokers among the study individuals. In intervention group 8 right and 4 left and in control group 7 right and 5 left ears were enrolled. Information on size of TM rupture is summarized in Table 1.

In Kartush et al. study it was determined that patching does not heal perforations with a size of more than 5 mm which is in concordance with the present study [9]. In a similar study by Habesoglu et al. 32 patients with acute TM perforation underwent repair with plateletrich fibrin; while no intervention was done for control group7. At the end of the first month TM was completely healed in 64% of patients in intervention and 22% of patients in control group which is in agreement with the results of our study.

In El-anwar et al. study the rate of infection in control group was more than intervention group [8]. Also in the present study no morbidities were recorded for PRP group but three cases of infection were reported for control group; although this was not statistically significant.

Treatment and hospitalization costs were not significantly different between intervention and control groups but it should be mentioned that PRP kits were provided by project’s budget and the cost was considered among true costs of treatment and hospitalization. Although the final cost in PRP group is more than control group, but it should be considered that 67% of patients in intervention group experienced complete healing and do not need further treatment. In contrast, 75% of patients in control group need conventional tympanoplasty which costs twofold of PRP method.

In conclusion we found that addition of PRP to conventional gelfoams used in TM perforation repair increases the complete healing rate of TM perforation to a significant extent. Also we realized that using PRP is associated with less morbidity and post-operational complications with no additional cost.

The present study has a relatively low sample size; so further studies with a larger sample size are suggested for certain conclusion about effects of PRP in TM repair. Also it is recommended that PRP effects be evaluated in hearing, Tinnitus and patients with chronic diseases such as diabetes. According to high success rate of PRP method and its possibility to be done by any otolaryngologist it can be applied in small size TM perforations as a minimal invasive method.

All procedures performed in the study involving human participants were in accordance with the ethical standards of the institutional research committee and with the 1964 Helsinki declaration and its later amendments or comparable ethical standards.