Cisplatin, as a platinum-based chemotherapeutic medication, is applied for various types of solid tumors. Regarding the treatment of cancer cells, cisplatin is potentially accompanied with some side effects such as nephrotoxicity, neurotoxicity, and ototoxicity in spite of high efficacy of Cisplatin. The present study aimed to determine whether the use of oral sertraline can contribute to preserve hearing threshold among the patients who receive cisplatin or not. This research has done for one year, along with a 3 months course and follow-up. This is a double-blind, randomized, and placebo-controlled trial study. The study was conducted in Oncology Clinic and Audiology Department of Firoozgar University Hospital in Tehran, Iran. Among 112 patients, 79 patients who were suffering from different types of solid tumors and were candidates for receiving cisplatin for chemotherapy treatment were selected. The grade of hearing impairment and otoacoustic emission in the first day and the last stage of the study was used for data analysis. Among 112 patients, 79 patients were randomly selected to receive either sertraline (50 mg/d) as the case group, or placebo as the control group. Before and after the treatments, the patients were assessed by High-Frequency Audiometry and dpOAE tests. First, the two groups were distributed homogeneously based on sex and age. Based on Common Terminology Criteria for Adverse Events (CTCAE), the Ototoxicity Grade indicated a significantly lower grade of deficits in the Sertraline group (p<0.001), compared to that of the control group. In addition, a significant difference was observed between the two groups regarding the changes in the threshold of dpOAE (p=0.000). The daily consumption of sertraline (50 mg/d) among the adults who were candidates for chemotherapy treatment with cisplatin could result in preserving the hearing threshold significantly.

Cisplatin, as a platinum-based chemotherapeutic medication, is applied for various types of solid tumors [1]. In spite of the high efficacy of Cisplatin and regarding the treatment of cancer cells, cisplatin is potentially accompanied by some side effects such as nephrotoxicity, neurotoxicity, and ototoxicity. A few agents and protocols are available, which can help to prevent these side effects, especially with respect to the prevention of cisplatin-related ototoxicity [2,3]. Increase in hearing threshold may occur in about 75%-100% patients after administering cisplatin [4,5]. The main risk factors which contribute to cisplatin-induced ototoxicity include extreme ages, higher dose and longer duration of drug use, simultaneous radiation therapy, anemia, and even some genetic vulnerabilities [2-6]. A large number of protective agents have been offered to lower the risk of cisplatininduced ototoxicity such as N-acetyl cysteine, sodium thiosulphate, amifostine, lipoic acid, salicylates, and even corticosteroids. The ability in controlling the side effects as a result of their antioxidant nature by neutralizing the cisplatin and increasing its urinary secretion is regarded as the main physiological feature of these agents [7]. Nearly all of the above-mentioned agents limit and reduce the antitumor activity of cisplatin and its affinity [8]. Further, High-Frequency Audiometry (HFA) and distortion product Otoacoustic Emissions (dpOAE) tests are mostly used for ototoxicity monitoring. In particular, HFA and dpOAE tests have been introduced in the references as the primary test of choice for early diagnosis of ototoxicity [9]. HFA comprises air-conduction threshold testing for the frequencies above 4000 Hertz (Hz).

The present prospective, double-blind, parallel, placebocontrolled, randomized clinical trial was performed among the patients suffering from different types of solid tumors such as Hodgkin lymphoma, non-follicular lymphoma, and malignant neoplasm of stomach, who gave all consent to chemotherapy treatment with cisplatin.

All the patients, aged 20-65, were referred to the Oncology Clinic of Firoozgar Hospital as cancerous cases (Since November 2016 to November 2017).

The patients with the history of previous chemotherapy with cisplatin or other ototoxic agents, suffering from head and neck tumors, receiving concomitant radiotherapy, wearing hearing aids, showing any evidence of severe otologic deficits, recent use of corticosteroids, any history of metabolic or chronic disorders, during pregnancy or breastfeeding, history of seizures, simultaneous use of Monoamine Oxidase Inhibitors (MAOIs), using antiarrhythmic drugs or warfarin, and at risk of any sertraline-related side effects such as respiratory disorders, palpitation, drowsiness, confusion, severe nausea and vomiting or other significant gastrointestinal problems, skin rashes, or extra pyramidal symptoms.

First, the patients in the case group were randomly by using the blocked randomization methods with block of size four and assigned to receive sertraline for 3 months (50 mg oral tablet, Actoverco, and 25 mg/day which increased to 50 mg/day if tolerated), while the patients in the control group were assigned to receive placebo (CANDEREL, Aspartam tablet). Both groups received cisplatin under the same protocols (75 mg/M2 every 3 weeks with oneweek interval during 3 courses). The corresponding author was thoroughly responsible for randomization and recruitment of the patients for interventions. In addition, the audiometrist and the patients were all blind to the randomization.

The hearing of all patients was assessed using both HFA and dpOAE tests to determine the presence and severity of hearing loss at the baseline and after completing the treatments (3 months).

According to Ozturk et al., the prevalence of ototoxicity among the patients receiving sertraline and those receiving the placebo were 42% and 79%, respectively12. Thus, a total sample size of 70 cases with 35 patients for each group was determined by considering a confidence level of 0.05 and strength of 90%.

In the present trial, 112 were recruited, among whom 33 were excluded. Forty-one patients who gave consent to chemotherapy under cisplatin received sertraline simultaneously. However, thirty-eight patients who received placebo were considered in the control group. As for its interferences with Cisplatin, consultations were made with the pharmacology experts before the study and, additionally, no drug interferences were observed in the references between these two drugs.

The overall prevalence of complications pertained to sertraline (severe nausea and vomiting) was found among 35 subjects (11.4%), who were excluded from the study. In addition, two other patients were excluded due to lack of treatment. In the control group, 3 patients were excluded (2 for immediate death (One of these patients died in a car accident and the other died a natural death), and 1 for non-compliance with the treatment protocol).

Table 1. Number of participants for each group. 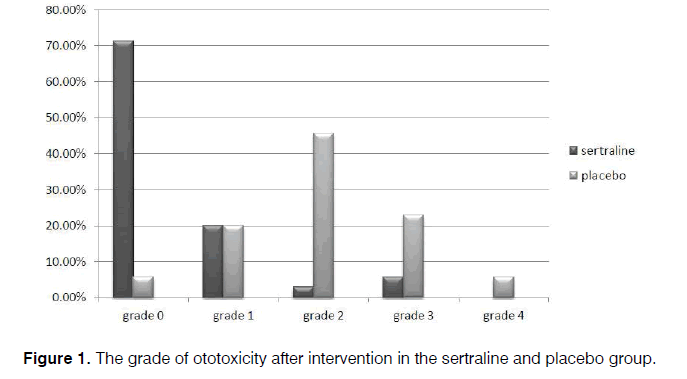 Figure 1: The grade of ototoxicity after intervention in the sertraline and placebo group.

As illustrated in Figures 2 and 3, more preservation of hearing threshold in the sertraline group was significant in both females (p=0.000) and males (p=0.001).

Figure 2: The grade of ototoxicity after intervention in the sertraline group among the males and females.

Figure 3: The grade of ototoxicity after intervention in the placebo group among the males and females.

Figure 4: The change in dpOAE threshold after intervention in the sertraline and placebo groups.

Further, the reduction of dpOAE level in the sertraline group was significant for the women (p=0.002), compared to the amount for the men (p=0.07) (Figures 5 and 6).

Figure 5: The change in dpoAE threshold after intervention in the sertraline group among the males and females.

Figure 6: The change in dpoAE threshold after intervention in the placebo group among the males and females.

The overall prevalence of complications pertained to sertraline (severe nausea and vomiting) was four among 35 subjects (11.4%), who were excluded from the study.

As mentioned in the introduction, only a few studies were conducted on the beneficial effect of sertraline on preventing cisplatin-induced ototoxicity among cancer patients. Definitive effects of sertraline and its related pharmacological advantages induced from its protective effect are ambiguous yet. Therefore, the present study is the first human clinical trial in order to assess the protective effects of sertraline as a protective agent for preserving the hearing ability in patients. Based on the results, the use of sertraline with the initial dose of 25 mg/day and a maintenance dose of 50 mg/day could considerably reduce the risk of hearing loss among the patients who receive cisplatin. In addition, the dpOAE threshold decreased among a few patients who received sertraline.

Of course, a considerable decrease was observed in the majority of the patients who did not receive sertraline. However, the occurrence of some serious complications related to sertraline administration such as severe nausea and vomiting forced the clinicians to modify the protective drug protocols or prescribe lower dosages of sertraline to prevent cisplatin-induced ototoxicity. However, all of the patients tolerated the 50 mg dose in the present study. Based on the results, changes in dpOAE among the men were not as significant as the amount among the women. In this regard, further studies can be conducted in larger sample sizes.

As it was already mentioned, only one experimental study focused on assessing the protective effects of sertraline in preventing cisplatin-induced ototoxicity. Accordingly, Ozturk et al. [12] reported that the risk for hearing loss was significantly lower in the animal samples receiving sertraline against the group receiving the placebo in different frequencies of 5642, 6165, 6726, 7336, and 7996 Hz.

Regarding the pathophysiological effects of sertraline on hearing threshold, it seems that these effects may be originated from the neuroprotective nature of sertraline, which has inhibitory effect on 3-trinitropropionic acid, and consequently protects the cellular pathways against behavioral, biochemical, and mitochondrial defects. This inhibitory effect is clearly remarkable in the doses of 5 and 10 mg/kg [11]. On the other hand, more human trials should be conducted by focusing on determining the physiological and biochemical effects of sertraline due to the indistinct role of sertraline in the changes in the cellular and molecular levels, along with the uncertainties in the clinical effects of the drug in preventing cisplatininduced ototoxicity.

This kind of medication by sertraline may be useful since it is mainly used in treating psychiatric disorders and the patients with cancer have a lower life expectancy, which may even contribute to some degrees of depression. It is worth noting that this aspect of sertraline effect was not evaluated in the present study.

Ethical Approval and Consent to participate: The authors assert that all procedures contributing to this work comply with the ethical standards of the relevant national and institutional guidelines on human experimentation and with the Helsinki Declaration of 1975, as revised in 2013. All the protocols were approved by the ethical committee at Iran University of Medical Sciences (IUMS) with Code of ethics: IR. IUMS.REC1395.9311369005 and the Iranian Registry of Clinical Trials (IRCT).

Informed Consent: Informed written consent was received for publication of the manuscript and figures [the patient data presented in Table 1/ the information in the figures/ manuscript]: “Written informed consent was obtained from the participants for publication of their individual details in this manuscript. The consent form is held by the authors and is available for review by the Editor-in- Chief”. The written informed consent was received from all participants before entering the study.

Based on the results, the use of sertraline with a daily dose of 50 mg in the adults who gave consent to chemotherapy treatment with cisplatin could significantly result in preserving hearing threshold. It seems that this prescribed intake of the drug can be tolerated by most of the patients and the protective protocols should be modified just for a few of the patients.

Limitation of The Study

Anemia was not excluded from the present study due to its high risk in patients with gastric cancer. Thus, attempts were made to divide the groups just by randomization.

Finally, the patients' observation lasted for only three months, while some of the changes in the hearing threshold may appear and arise beyond that length of time.

The authors wish to thank Dr Manijeh Motevalian, MSc. PhD from the Department of Pharmacology & Razi Institute, Drug Research, Iran University of Medical Sciences for her thoughts and comments on this work.