Tinnitus after Blast Injury; a Prospective Study in Basrah, Iraq

Background: There is many civilians and soldiers who exposed to explosions in Iraq each month and they need an otolaryngological and audiological assessment.

Objective: To recognize the possible auditory insults and the recovery period of the acquired damages that may resulted from explosion and help for planning of optimal management strategies of otological manifestations and prevent undesirable consequences.

Patients and Methods: A prospective, descriptive study included forty-seven patients who were exposed to blast injuries within two weeks came to otolaryngology unit in Basrah Teaching Hospital complaining from otological symptoms from July 2017 tell January 2019. Three periodic assessments were done for each patient. An initial evaluation was done in the 1st visit included a detailed history and examination to evaluate the symptoms and assess the associated non-otological injury. An otological examination were done for all patients in the three visits, included microscopic ear examination, photos for the perforated tympanic membrane were taken to grade the perforations depending on their surface area, Pure tone audiometry and tympanometry. Thirty-eight patients were available to follow up in the 2nd and 3rd visits.

Results: All of the 47 patients were young and middle age male, hearing loss and tinnitus were the most presenting symptoms, which improved with time. Hearing impairment mostly in the high frequencies however there was improvement in the subsequent visits. The majority of patients (93.6%) presented with tympanic membrane perforation mostly grade I which usually healed spontaneously. There was a statistically significant associations between the degree of tympanic membrane perforation and associated nonotological injuries and with the explosions if occurred in closed space.

Conclusion: Blast related otological injury constitute the main cause of morbidity as the ear is the most sensitive organ to explosive blast injury. Hearing loss was the dominant symptoms at presentation mainly in high frequencies, but fortunately most of patients improved with time. Tympanic membrane perforation constituted the mostly seen sign, however spontaneous healing can be expected in the majority of cases

Blast injuries are characterized by anatomical and physiological changes from the direct or reflective overpressurization force impacting the body’s surface [1]. Acute acoustic trauma is a clinical condition with immediate persistent hearing damage indicate injuries to the ear due to blast or impulse noise [2]. While blast injury of the ear designates the various effects of explosive forces on the auditory system which might be either Explosive (refers to otological trauma due to the detonation of explosives) or non-explosive blast injury to the ear (otological trauma caused by a blow (pressure) to the ear that seals the external auditory meatus, causing a shock wave to be transmitted along the auditory canal) [1].

A blast wave generated by an explosion starts with a single pulse of increased air pressure that lasting a few milliseconds. This is shown in Figure 1.

Figure 1: Characterization of a blast wave described by the three properties: peak overpressure (loading pressure), positive duration
and positive specific impulse. Blast waves propagate in the medium air spherically with strongly decreasing peak pressures by
increasing the distance to the detonation source. In general, a blast wave is characterized by a shock front, characterized by a
sudden strong increase of the loading pressure up to the ultimate, from Phillips YY. Primary Blast Injuries. Annals of Emergency
Medicine; 1986, Dec; 106 (15); 1446-5016.

The duration, velocity and intensity of the blast wave depends on the type of explosive material and the distance from the point of detonation [2,3]. Type of the explosive in an explosion, the conversion of solid or liquid material into a gaseous form is accompanied by the release of large amounts of energy. The characteristics of this process differ according to the explosive involved and agents, for example; gunpowder release energy slowly, while highenergy explosives such as Trinitrotoluene (TNT) produce a very rapid release of energy [1].

Different stages of injury occur after blast explosion; primary injuries caused by overpressure or shock waves. The ears are most often affected by the blast overpressure, followed by the lungs and the hollow organs of the gastrointestinal tract [4]. Secondary injuries are caused by objects propelled by the explosion. Most cases of casualties are caused by secondary injuries due to a larger geographic area affected by this form of injury than the primary blast site and debris can easily be propelled for hundreds or even thousands of meters [5].

Tertiary injuries results from displacement of the air by explosion which creates a blast wind that can throw victims against a solid object. Children are at a higher risk due to their relatively smaller body weight [5,6]. The last type is Quaternary injuries or miscellaneous injuries, are all other injuries not involved in the first three classes. These include flash burns and psychiatric injury like post- traumatic stress disorders, is the most common quaternary injury may affect people who are otherwise completely uninjured [6].

A prospective study carried out in otolaryngology department of Basra Teaching Hospital from July, 2017 to January, 2019.

Fifty-nine patients attended the otolaryngology unit seeking for medical care to alleviate their new otological symptoms that developed after the exposures to explosion were examined for this study. Twelve patients were excluded from the study due their previous history of aural fullness, hearing loss and prolong exposure to noise. Forty-seven male patients, their age range from 21-55 years who exposed recently (within two weeks) to explosive blast injury were included in this study.

Demographic data for all patients were obtained on initial visit that include:

name, age, complaining otological symptoms, distance from the explosion site, type of explosion and whether the explosion occurred in open or closed space.

Patients were checked three times at the time frame from initial blast injury shown below:

• First visit was within the 2 weeks from initial blast exposure.

• Second visit was within four to six weeks from initial blast exposure.

Each visit, the patients were subjected to complete otolaryngological examination emphasizing on otological assessment which include:

General Otological Examination: Otoscopic examination and microscopic examination of the ear for cleaning of external auditory canal from wax, foreign body, blood clots and for searching for any tympanic membrane perforation. Hearing assessment done for each patient using standard pure tone audiometry and tympanometry in each visit.

Assessment of Tinnitus: Patients who complained from tinnitus was assessed using Tinnitus Handicap Inventory (THI) as a quick and reliable method for assess of tinnitus [8]

The severity of tinnitus complain is graded using the tinnitus handicap inventory severity scale as seen in table1 [9].

This table 2 shows that patient may presented with unilateral or bilateral tinnitus after explosion with good percentage of reduction between 1st. and 3rd. visit.

This table 3 shows that there was a dynamic change in tinnitus score (improving) between visits.

These table 4 shows a clear trend of moving of patients from a status of tinnitus to a status of no tinnitus complains after six months.

47 male patients enrolled in this study; their age ranged from 21-56 years old as shown in Figure 2. 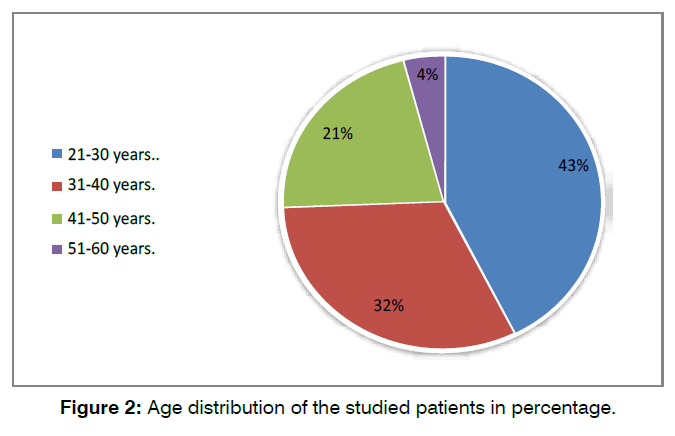 Figure 2: Age distribution of the studied patients in percentage. 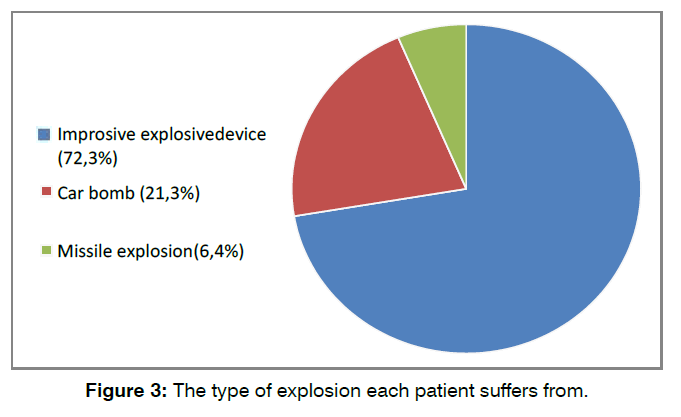 Figure 3: The type of explosion each patient suffers from.

Because our country was and still in a war against terrorism and ISIS and like many other countries in war, [10] all of patients that included in this study were males with age range from 21-56 years old. The finding of male predominate war injuries was similar to the findings of Persaud et al study [11], Mezri et al [12] and Sridhara et al study [13]. Where in the study of Mrena et al [13,14] and Van Haesendonck et al [15-17] demonstrate equal male: female distribution as there were 14 females and 15 males in the first and 26 female and 30 male in the later as the explosion occurred in shopping mall in both studies.

At time of the presentation there were 37 patients complaining from tinnitus representing (78.7%). This was similar to the finding of Persaud et al, Mezri et al and R. Mrena et.al (88%, 80% and 66%) respectively [11,12,14]. While Ballivet de Régloix S et.al [15] reported 43% incidence of tinnitus in their study. This might be attributed to the long duration of their study from 2002 tell 2014 as compared to our study with short time (2 years).

This study showed improvement in tinnitus complain with subsequent visits, as there was an improvement in the second visit with only (52,7%) of followed patients had a tinnitus complain & in the third visit only (18,4%) still complaining from tinnitus. So that there is a statistically significant improvement of tinnitus complain with time. This similar to the findings of Persaud et.al study [11]. Which they stated that tinnitus eventually disappeared with time while the study of Mrena et al [14]. Most patients with tinnitus showed a spontaneous improvement, however, a few patients had a persistent tinnitus, so that it is important to evaluate the severity of tinnitus as it can affect the quality of life the study of Riemenschneider et al [16]. Mentioned that there was no significant improvement in tinnitus scores six months after explosion, whereas, Ritenour [18] had some patients with persistent tinnitus even after surgical repair to the tympanic cavity which needed tinnitus masking and it affect the military life of the affected individuals. As for our study no surgical intervention was done for any patient with tinnitus included in this study.

The non-otological associated injuries can give us an impression regarding the extent of ear damage due to blast injury, there was a statistically significant relationship between tinnitus severity and the extent of associated non otological injury, this result is consistent with Riemenschneider et al [16] and with Mrena et al [14] studies showing an increase in risk of tinnitus, hearing loss and otological damage with serious and significant head, body and facial injuries that result from blast explosions.

The main drawback of this study is limited time spent in follow up of patients, especially those with permanent hearing loss and tinnitus due to their engagement in military and or paramilitary activities.

Blast injuries can result in a serious tinnitus complain for military and non-military personal exposed to acute acoustic trauma that result from blast explosion. However, most of the blast related symptoms resolved spontaneously with tissue or orthopedic injuries were significantly associated with blast related tympanic membrane perforation.

The authors would like to thanks Dr. Hashim Hameed and all audiology department for their cooperation in following of these cases.

Verbal consent from all patients had been taken to share and discuss their findings.