Objectives: To determine the prevalence of tinnitus in Type 1 Diabetes Mellitus (T1DM) patients, to evaluate its severity and to correlate it with estimated Glomerular Filtration Rate (eGFR) as well as glycaemia control (HbA1c).

Material and Methods: We performed a questionnaire-based cross-sectional study at Hospital Canselor Tuanku Muhriz (HCTM) from a period of 15 months. A total of 133 T1DM patients who fulfilled our study’s criteria were subjected to otoscopy examination, tuning fork test and free field voice test. The mini-Tinnitus Questionnaire (TQ) was used to assess the severity of tinnitus. We were careful to categorize the perceived duration of tinnitus.

Results: The prevalence of tinnitus among T1DM patients was 24.1% (32/133 patients). Out of 32 patients, approximately 78.1% (25 patients) had a compensated level of tinnitus distress and the remaining 21.9% (7/32) had moderate tinnitus. The duration of tinnitus ranged from 2 seconds to 2 minutes, wh?ch was ringing and intermittent in nature. The HbA1c and estimated Glomerular Filtration Rate (eGFR) were higher in tinnitus compared to the non-tinnitus group. There was no significant correlation between the severity of tinnitus and HbA1c level or eGFR.

Conclusions: Our study concluded that tinnitus amongst T1DM patients was likely to be non-pathological in view of its short duration with minimal to no distress to the sufferers. An elevated HbA1c may increase the risk of develop?ng tinnitus.

A questionnaire-based cross-sectional study was done over a period of 15 months at the Endocrine Clinic (Adult and Pediatric) and Primary Care Clinic Hospital Canselor Tuanku Muhriz (HCTM) follow?ng approval from local research and Ethics Committee. The study inclusion criteria included patients with T1DM diagnosed at HCTM with or without hypertension, and patients aged 12 to 50 years. The results of renal profile and HbA1c level were documented. Exclusion criteria included patients

Our study patients underwent a hearing assessment to rule out hearing loss as part of the exclusion criteria. Th?s was followed by an otoscopy examination, tun?ng fork test, as well as a Free Field Voice Test. Informed consent was obta?ned from patients who fulfilled the inclusion and exclusion criterias. Demographic data and other relevant information pertaining to the research was obtained via questionnaire. Patients with tinnitus were given the mini- TQ questionnaire. All ?ncomplete questionnaires resulted ?n pat?ent exclusion. The mini-tinnitus questionnaire is an abridged version of Tinnitus Questionnaire. Pat?ents were prov?ded w?th the m?n?-TQ ?n 2 languages, wh?ch was randomly d?str?buted amongst pat?ents. All the data obtained will be collected and analysed using SPSS software. Correlations between these variables were also assessed using the Spearman Correlation test. Statistic significance was set at p value of less than 0.05 (p<0.05). Chi-Square test was used to assess variable in groups (Figure 1). 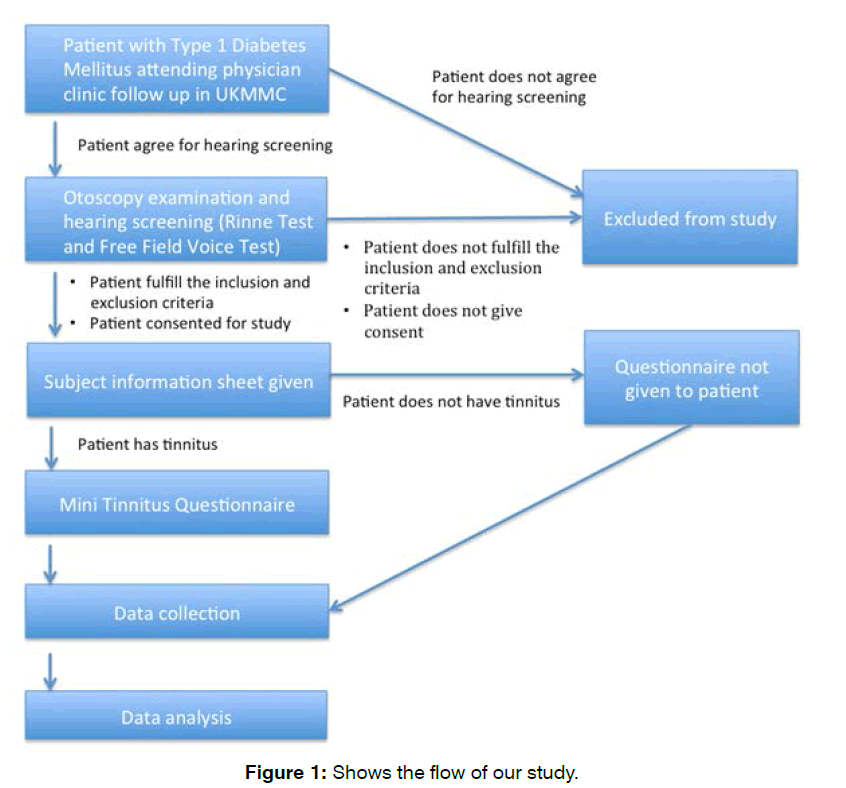 Figure 1: Shows the flow of our study.

Table 1: Shows the epidemiology of the patients.

The prevalence of tinnitus amongst T1DM patients in this study was 24.1% (32).

Table 2 shows the epidemiology and tinnitus characteristics in the tinnitus group. Most of the patients with tinnitus are from the ‘12-20’ years group. All of them have intermittent and ringing-type tinnitus. The majority of the patients (65.6%) had tinnitus for a duration of less than 10 seconds.

Table 2: Shows the epidemiology and tinnitus characteristics in the tinnitus group.

Table 3 shows the co-morbid?t?es amongst the tinnitus group of patients. Only two (6%) had hyperlipidemia, one (3%) had a history of repaired Patent Ductus Arteriosus (PDA), and 2 (6%) had hypothyroidism and was on thyroxine supplementat?on.

Table 3: Shows the co-morbid?t?es amongst the tinnitus group of patients.

Table 4: Shows the percentage of tinnitus across the age groups.

Table 5: Shows the severity of tinnitus based on the mini-TQ questionnaire amongst the tinnitus group of patients.

Table 6 compares the HbA1c level between tinnitus and non-tinnitus groups HbA1c level was statistically significantly higher ?n the t?nn?tus group compared to the group without tinnitus (U= 1112, p=0.008).

Table 6: compares the HbA1C level between tinnitus and non-tinnitus groups HbA1C level was statistically significantly higher ?n the t?nn?tus group compared to the group without tinnitus (U= 1112, p=0.008).

Tinnitus may cause substantial distress. It may man?fest as annoyance, anxiety, depression, lack of concentration and sleep disturbance11 Diabetic microangiopathies and neuropathy affects the sensory organs i.e. the auditory pathway, and may cause symptoms such as hearing loss, tinnitus and vertigo12 Tinnitus commonly precedes hearing loss, which is described as high frequency, sensorineural, and progressive13 In this study, the prevalence of tinnitus amongst T1DM is 24.1% (32/133). It is higher compared to a (13.3%) study done by Klagenberg et al9 One possible cause for a higher prevalence of tinnitus, may be due to the criteria of tinnitus chosen in this study, which was independent of the duration.

Tinnitus prevalence ?n the general populat?on increases with age and usually peaks at around 70 years of age, whereby the prevalence then starts to drop as age increases4,19. Our study showed a h?gher prevalence ?n the younger age group, albe?t young T1DM pat?ents. Most of the participants with tinnitus (56.3%) reported tinnitus for approximately 5 seconds, and it was ‘ringing’ and ‘intermittent’ in nature. The time between each tinnitus episode varied. In our opinion, patterns of tinnitus in this study are believed to be non-pathological due to the fact that the longest duration of tinnitus recorded lasted for only 2 minutes. The majority of the patients (n=25, 78.1%) have a compensated level of tinnitus distress (no clinically relevant distress due to the tinnitus), wh?lst the others (n=7, 21.9%) have tinnitus severity of moderate distress level. This shows that most T1DM pat?ents with tinnitus have mild tinnitus which rarely causes distress. This was assumed by the fact that none of the patients complained of tinnitus to physicians during their consultations.

A study in Taiwan showed that Chronic kidney Disease (CKD) increased the risk of develop?ng tinnitus14 A combination of factors resulting from CKD, including abnormal electrolytes, urea and creatinine levels, may lead to cochlear microcirculation dysfunction causing damage to the cochlear15 In this study, we found a negative correlation of eGFR with tinnitus severity, albe?t not statistically significant. This study also revealed that there is no significant correlation of HbA1c with tinnitus severity, supported by a study with the same conclusion amongst diabetes T2DM Table 2 patients16

HbA1c reflects the average glucose levels of the prev?ous 3 months. The prolonged hyperglycemic state may disturb bra?n and ?nner ear funct?on, which may lead to the reduced processing of complex sounds. Th?s may be a contr?but?ng factor to the occurrence of tinnitus and hearing impairment17-19 Srinivas found that the prevalence of sensorineural hearing loss is was high (>85%) amongst subjects with HbA1c of more than 8.18 HbA1c levels in patients with tinnitus was found to be significantly higher than those without tinnitus in this study.

The prevalence of tinnitus amongst T1DM patients in this study was 24.1%. Based on the mini-TQ, 78.1% (n=25) had a compensated level of tinnitus distress and 21.9% (n=7) had a tinnitus severity of moderate distress level. Causes of tinnitus in T1DM are multifactorial. Duration of tinnitus ranged from 2 seconds to 2 minutes, was ringing and intermittent in nature, and therefore, of non-pathological type. The group with tinnitus had a significantly higher level of HbA1c compared to those without tinnitus. There was no significant correlation found between the severity of tinnitus with HbA1c level and eGFR in our study.

We would like to thank Prof. Dr. Wu Loo Liang from the Pediatric Department of HCTM for her collaboration and input in this study.