Tinnitus: Summary of Current Understanding of the Pathophysiology Mechanisms in different Ear Diseases

Introduction: Tinnitus is well known since ancient time with wide prevalence in our community everywhere. Despite advancement in technology, we are far from knowing confirmed Pathomechanism and one treatment of choice for tinnitus. Present review article is an attempt to investigate various pathophysiology mechanisms available, in literature to explain the generation of tinnitus with respect to known diagnoses in which tinnitus is a significant complaint.

Method: Author performed detailed online data search for publications on PubMed, Medline, Google Search, Scopus between 1990-2020. Author’s focus during search was, on the tinnitus and pathophysiology behind the diagnoses involving external ear, middle ear, and inner ear as site of pathology.

Conclusion: We still do not know with surety the likely cause behind the generation of tinnitus in various diseases except for objective which are treatable. While rest of subjective type there is no curative treatment available

Our understanding that tinnitus is not a disease but symptomatic manifestation of disturbance in auditory pathway which include conductive and sensorineural till auditory cortex. Historically tinnitus is known to be derived from Latin word tinnire meaning ringing or to ring. Paparella book on otolaryngology define tinnitus as unwanted auditory perception which has internal origin, usually localized, and heard rarely by others [7]. Proceedings of the Fourth International Tinnitus Seminar, Bordeaux, France in 1992 accepted tinnitus as a noise in ear or head which last for at least 5 minutes, with twice a week interval [8].

Common ear diseases acting as trigger factor in the origin of tinnitus [9-11](Table 1).

Pathophysiology of Tinnitus Generation: Various pathophysiologic mechanisms have been proposed to explain origin of tinnitus. Theories try to explain reason for tinnitus generation based on lesion in ear affecting conduction of sound wave:

These theories can be broadly classified in two types:

Patients with Hearing Loss: Neural plasticity has been explained as the reason behind generation of subjective tinnitus [8].

Many theories are available in literature to explain neuroplasticity mechanism which includes (Figure 1):

Spontaneous Otoacoustic Emissions mechanism (SOE) theory: Kemp discussed this hypothesis in an article published in 1981 [9,10]. These are acoustic signals generated by normal cochlear Outer Hair Cells (OHC), which is propagated to external canal. This hypothesis is the reason behind abnormal sound perception in patients with: 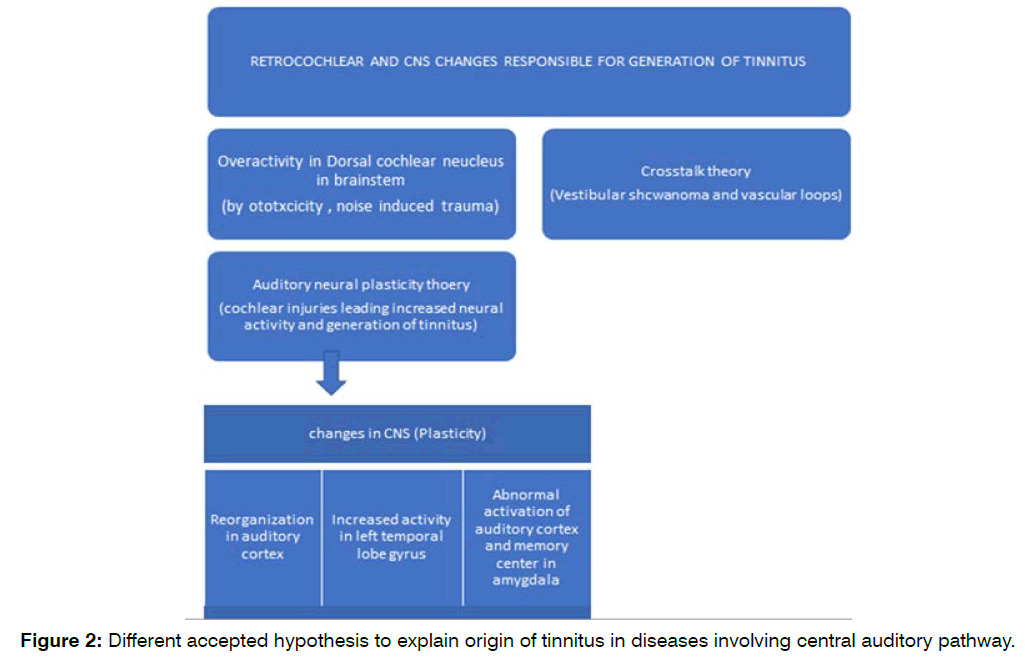 Dorsal Cochlear Nucleus: has been proposed as site for generation of tinnitus particular after exposure to intense noise and chemotherapeutic drugs like cisplatin. Ototoxicity and intense noise damages outer hair cells in cochlea [17,18]. Inadequate OHCs and IHCs sensory supply led to overactivity by dorsal cochlear nucleus in brainstem after neuroplasticity changes [19].

Crosstalk Theory: Tinnitus is one of the major complaints in patient of acoustic neuroma or vestibular schwannoma. This theory tries to explain the generation of tinnitus in these patients. Tinnitus in vascular loops cases in which vessels are compressed, associated with ephaptic coupling, which might lead to tinnitus if synchronization of the stochastic firing in the cochlear nerve is perceived as sound [20,21].

B). Patients without hearing loss (disorders of head and upper neck region): Non-auditory pathomechanisms for generation of tinnitus:

Somatosensory system is also known to affect the normal function of Dorsal Cochlear Nucleus (DCN) and Inferior colliculus and generation of tinnitus [25,26] (Figure 3).

Figure 3: Hypothesis for origin of tinnitus with involvement of somatosensory system.

Temporomandibular joint syndrome, Whiplash injuries [27], reason for the generation of tinnitus in these conditions is injuries to cranial nerves V, VII, IX, X fibres leading to dorsal cochlear nucleus changes sending unregulated signals to central auditory pathway, which will respond in the form of tinnitus [28].

Tinnitus associated with emotional stress, anxiety, and other neurotic disorders:

Abnormal neural input from limbic system has been proposed as the reason for generation of tinnitus in patients who have underlying, emotional stress or neurotic issues like anxiety, depression [29-31] (Figure 4).

Jastreboff has described tinnitus as phantom auditory phenomenon. Phantom phenomenon was first described by French surgeon Ambroise Paré (1510–1590) discovered phantom limb phenomenon, in patients who used to complain pain in the amputated limb. Researcher found neuroplasticity mechanism behind this abnormal sensation. Same neuroplasticity or neuro-adaptability when input from peripheral or central auditory pathway is disturbed because of pathologies in external ear, middle ear, cochlea and retrocochlear structures many theories proposed to explain in detail those disturbance led to generation of tinnitus. Another baffling issue in the management of tinnitus when there is no hearing loss and when it is found to arise after episodes of emotional stress, anxiety, and even depression. There are well defined theories to explain above two not so uncommon scenarios. We hope very soon those theories will be more refined, so that we are able to understand and manage the tinnitus problem which is one of the most common chronic problems in community affecting quality of life in every possible way.