Transadaptation and Standardization of Tinnitus Primary Function Questionnaire in Hindi

The term tinnitus is derived from the Latin word tinnire, meaning to ring. Although it is often referred to as "ringing in the ears, tinnitus can be perceived as many different sounds including hissing, clicking or whistling. India being a multilingual country needs to develop and standardize tinnitus questionnaire in Indian language. There are no significant test materials available with respect to Indian context based on Hindi, which can be routinely used by the professionals to assess the primary effect of tinnitus in patients. Thus, a need was felt to develop instrument in Hindi that can be used as per the ICF (International Classification of Functioning, Disability and Health) classification system in all over the country. The study aims to evaluate the impact of tinnitus on quality of life of clients having tinnitus with and without hearing loss by using primary function questionnaire (TPF-Hindi). The present study attempts to transadapt and standardize Tinnitus Primary function Questionnaire in Hindi. And administer both the questionnaires (TPFQ-H vs THQ-H) on the tinnitus clients with and without hearing loss and compare the impact of tinnitus in terms of quality of life in subjects with tinnitus with hearing loss and without hearing loss. A 12-item questionnaire was administered to 50 patients (tinnitus with hearing loss and without hearing loss) and compared between two questionnaires Tinnitus Primary Function Questionnaire and Tinnitus Handicapped Questionnaire (TPFQ-H & THQ-H). The results of the current study were analysed by using Statistical Package for the Social Sciences (SPSSv 20.0). Scores were positively correlated with the Tinnitus Handicap Questionnaire. There is significant correlation between both the scales and reliability between the scales is also good.

The term tinnitus is derived from the Latin word “tinnire,” meaning “to ring”[1]. “Tinnitus is a perception of sound, which is not produced intentionally, and it originates in an involuntary manner in the head of its owner, or may appear to him to do so”[2]. Almost everyone has experienced a short, faint, and ringing in the ears at some time or other. It creates direct impact on a person’s emotion, hearing, and ability to sleep and to concentrateinfluencing basic life functions, such as socialization and relaxation.

In International Classification of Function, Disability and Health (ICF 2001) tinnitus is coded as a separate condition and is defined as a ‘sensation of low-pitched rushing, hissing, or ringing in the ears.’ Classification of tinnitus helps in the process of diagnosis and selecting the optimal treatment option for the disorder. Tinnitus has been classified into two broad categories namely subjective and objective tinnitus. Objective tinnitus is audible to any one in addition to the affected individual which is associated with different vascular aetiologies, muscular spasms and eustachian tube dysfunction [3]. On the other hand, subjective tinnitus is not associated with any physical noise and is only audible to the affected individual and it is referred to as “head noise” [4].

The prevalence of tinnitus increases with age and found to be more prevalent in men than the women [5]. Approximately 17% of the world, and 4 crore odd in India population has been troubled by tinnitus.

A new questionnaire Tinnitus Primary Function Questionnaire (TPFQ) was designed to specifically evaluate how tinnitus affects the primary ways impacts a person’s life. It focuses on the four areas (a) emotions, (b) hearing, (c) sleep and (d) concentration. The present study attempts to transadapt and standardize tinnitus primary function questionnaire in Hindi to evaluate the impact of tinnitus on quality of life of clients having tinnitus with and without hearing loss by using primary functions questionnaire (Hindi).

A total of 50 participants (age range 20 to 70 years) (mean age: 41.4 and standard deviation of age: 13.4) were selected for the study based on the inclusion and exclusion criteria. All the participants having subjective, permanent and spontaneous unilateral or bilateral subjective idiopathic tinnitus with and without hearing loss were taken in the present study.

The Participants who fulfilled the criteria for the study were selected and oral consent was present to the participants. They were instructed to read the questionnaire (self-questionnaire TPFQ-H) thoroughly and complete comfortably.

Group-1: The group 1 consisted of 27 participants having tinnitus with hearing loss of age range 20 to 70 years.

Group-2: The group 2 consisted of 23 participants having tinnitus with normal hearing of age range 20 to 70 years.

Group-3: Group 3 was consisted of twenty normal participants and five participants with tinnitus and hearing loss (not included for statistical analysis). The suggestions given by these participants regarding the test material were included in the actual test material (for linguistic validation of developed transadapt TPFQ-H).

Participants were selected on the basis of following inclusionary criteria-

2. Both genders (male and female)

5. Participants should have knowledge of Hindi language.

Participant with neurological, psychological & behavioural issues were excluded from the present study.

The four subscales include:

All subjects were asked to Scoring based on likert scale ,the participant responds with scores one to five: fully agree (‘5’), mostly agree (‘4’), sometimes agree (‘3’), partially agree (‘2’) and fully disagree (‘1’).

The research was based on following stages:

Stage 3: Administering the transadapted questionnaire (TPFQ-H & THQ-H) on participants with tinnitus (with hearing loss and without hearing loss) and obtained the test score.

The linguistic validation of the original version of the tinnitus primary function questionnaire into the hindi version, and its psychometric specification was done with the assistance of a professional in the following steps:

In the first step Tinnitus Primary Function Questionnaire (TPFQ) English was translated in Hindi by ten native speakers of Hindi, with high level of proficiency in English and Hindi.

In the second step of linguistic validation, reverse- translation from Hindi to English was done to check intactness of meaning by another ten native Hindi speakers with high level of proficiency in Hindi languages. Back translation of the transadpted Tinnitus Primary Function Questionnaire (TPFQ-H) to English was done to measure the homogeneity of the original version of Tinnitus Primary Function Questionnaire.

Transadapted TPFQ-H was provided to five native Hindi speakers who were Speech Language Pathologists (SLPs) and Audiologists, having at least two years of clinical experience for feedback rating and appropriateness of newly developed tool. The purpose of linguistic validation was to rule out dialectic variations, if any, in the questionnaire and incorporate appropriate suggestions of the professionals. It was noted that, similar findings emerged as during the Forward- Backward translation; no linguistic difficulty was reported by participating Audiologists and Speech and Language Pathologist.

The Questionnaire (TPFQ-H) was administered on twenty normal participants having no history of hearing loss and tinnitus and five participant having tinnitus with hearing loss (group 3). (Ten Hindi speakers students of standard 10th, who has no idea about tinnitus and another 10 Hindi speaker student from BASLP and MASLP field who has concept of tinnitus). These participants were not included in the actual study. The suggestions given by these participants regarding the test material were included in the actual test material (for dialect variation & linguistic validation).Based on the pilot study time taken for the administration of the developed transadapted TPFQ-H was approximately 15-20 minutes.

Stage 3: Administering the transadapted test on participants with tinnitus and obtaining the test score:

The total scores from Tinnitus Primary Functions- Hindi (12 items) version were significantly correlated with Tinnitus Handicap Questionnaire (THQ-H) for validation of TPF. The THQ-H presented to each subjects (50) one by one and scoring was based on likert scale (1-5 rating scales). Validity indicates that the test measures what it purports to measure. This is usually demonstrated by comparing it with a previously similar test. For example, the TFI was validated with the THI, which was in turn validated with the THQ [7].

Stage 5: Checking the reliability of the transadapt Tinnitus Primary Function:

Scoring of the TPFQ based on 1 to 5 point likert scale, For each item on questionnaire, the participant responds with scores one to five: fully agree (‘5’), mostly agree (‘4’), sometimes agree (‘3’), partially agree (‘2’) and fully disagree (‘1’).

The responses are summed up with a total score ranging from 1 to 5 points. Higher scores represented greater perceived difficulty. Severity of the problem could also found out based on 5 categories of scales (likertscale) calculated for the total TPFQ-H score.

Another questionnaire Tinnitus Handicap Questionnaire (THQ-H) has 27 questions. All of them are divided into three factors: factor 1 (Behavioral, Social, and Emotional) and factor 2 (Hearing abilities), factor 3 (Perspective). Severity of the problem could also found out based on 5 categories of scales (likert-scale) calculated for the total THQ-H score.

The obtained scores of each participant were entered separately in terms of total TPFQ-H and its four subscale i.e., (a) concentration (b) emotions (c) hearing, and (c) sleep in Statistical Package for Social Sciences (SPSSv- 20.0) system and analysed by using Pearson correlation, Cronbach’s alpha and Parametric (Independent) t-test. Mean and standard deviation of total TPFQ-H and its four subscales were calculated. The English version of the questionnaire transadapt into Hindi was administered in group of Hindi speaking individual with tinnitus. Tinnitus Handicap Questionnaire Hindi version administered on same group for correlation and validation of questionnaire [10]. Both questionnaires were administered to the same subjects one by one and the total score from the two questionnaires was computed for correlation. It helps to measure the severity and negative impact of tinnitus with and without hearing loss. It also helps to measure the complex interference of tinnitus with psychological distress and quality of life.

The Mean & Standard deviation and Pearson’s correlation, Cronbach’s alpha scores was found for TPFQ-H & THQ-H and its subscales.

The correlation between (Factor 1 & 2 and subscale of TPFQ-H) showed excellent correlation, significant at 0.01 levels & 0.05 levels (Positive correlation). Factor 3 and subscale 3 showed less correlation. Hence, both questionnaires can be used for clinical purpose (Table 2).

Hence, based on the above results it can be noted that there is significant correlation between both the scales and reliability between the scales is also good. Therefore both the scales can be used for finding out impact of tinnitus on individuals’ primary functions.

However, the Tinnitus Primary Function Questionnaire was more sensitive to changes in tinnitus function. 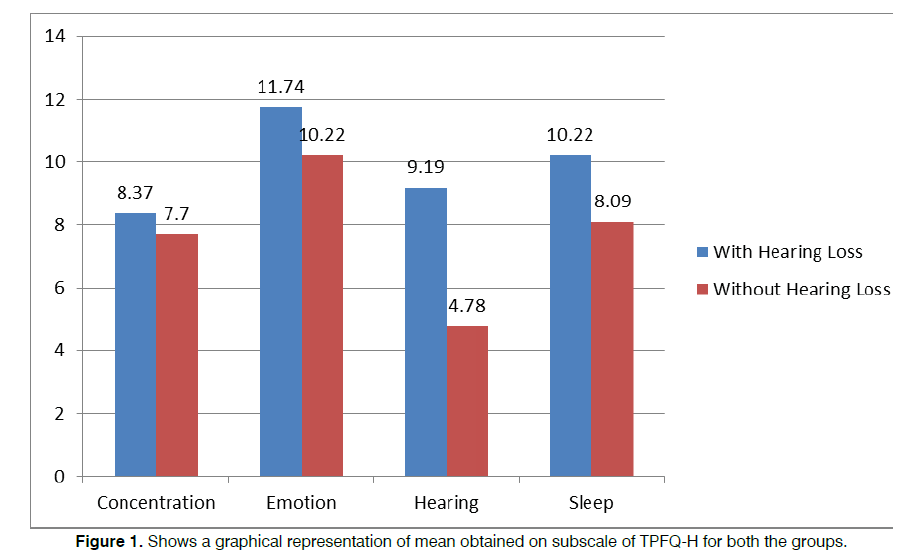 Figure 1: Shows a graphical representation of mean obtained on subscale of TPFQ-H for both the groups.

Table 5. Mean and SD of THQ-H total and subscales of tinnitus with and without hearing loss. 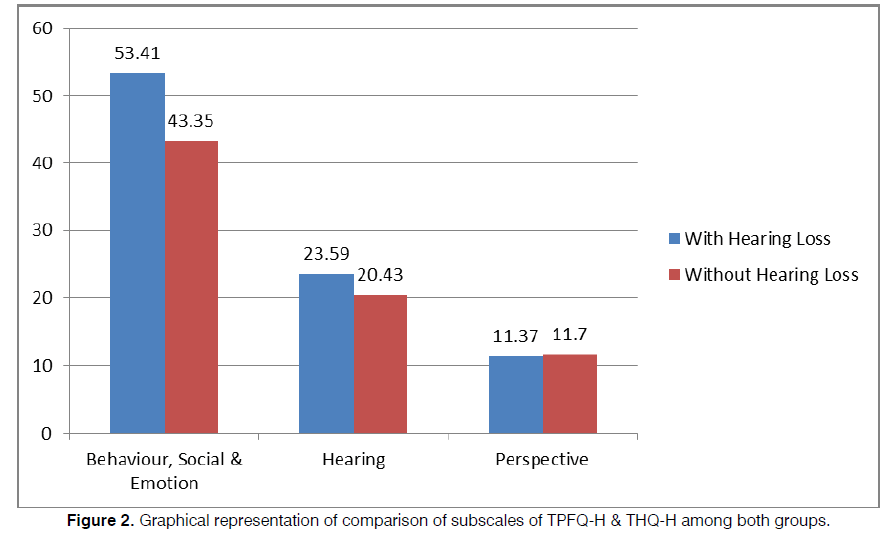 The present study focused on evaluating the reaction and impact of tinnitus with the self-reported questionnaire. Most of the instruments that evaluate the “quality of life” were developed in English and were intended to be used in English speaking countries. The study is needed to develop instruments to be used in countries where English is not a native language. Such questionnaires when used with the person having different language backgrounds will not yield exact result. There are very few questionnaire developed in Indian languages to assess negative impact due to tinnitus. The present study is an attempt to transadapt and standardizes Tinnitus Primary Function (TPFQ) in Hindi language. So it will help to provide an efficient and easy measure of negative impact related with tinnitus.

To standardize Tinnitus Primary Function (TPFQ) in Hindi, reliability and validity of the H-TPFQ were thoroughly studied after the linguistic validation. The results indicated good correlation between score of TPFHindi and THQ-Hindi, High internal consistency among the twelve questionnaire of TPF-H and high correlation in test-retest reliability.

To conclude, Tinnitus is a well-accepted issue that affects the overall Quality of Life of individuals with tinnitus. Literature has supported the need for assessing the Quality of Life in this population. Considering the need for having reliable questionnaires, questionnaires have been developed or translated in various languages. The English version of Tinnitus Primary Function Questionnaire (TFP) found to be more robust and reliable among them was selected for translation in Hindi language.