Background: Meniere’s Disease (MD) is a complex and multifactorial inner ear problem characterized by episodic vertigo, unilateral sensori-neural hearing loss and tinnitus or fullness in the ear due to Endolymphatic hydrops. There are multiple treatment options available for this disease; from which cortisone therapy can be given in different routes and in different doses

Objectives: is to identify the successfulness of treatment of MD by multi-session intra-tympanic dexamethasone injection compared to the single-session method.

Method: Interventional prospective study of study 70 cases of definite MD treated by 4 sessions of intra-tympanic injection weekly and compared to a control group of 66 cases of age matched patients with definite MD treated by the traditional single intra-tympanic injection. Patients In the study and the control group were observed for 6 months after the treatment for the development of any vertiginous attacks.

Results: only 3 patients in the study group and 30 patients in the control group failed to respond to treatment and developed vertigo in the period of 6 months after treatment. The difference between the success rate in the two groups was statistically highly significant

Conclusion: multi-session Intra-tympanic dexamethasone injection is superior to the single injection in control of vertigo in patients with definite MD.

Meniere’s Disease (MD) is a complicated inner ear problem. The characteristic findings of this disease is a combination of episodes of vertigo with sensori-neural hearing deficit, and tinnitus or fullness in the ear [1].

The pathophysiology of MD remains unclear, the exact cause of it is not very well understood [2]; Modern High- Resolution MRI studies for patients complying with strict criteria for MD showed Endolymphatic hydrops. However, endolymphatic hydrops may be seen in other ear diseases and has been also confirmed in postmortem studies of some humans with no history of dizziness [2].

By definition, MD is idiopathic; that mean it is a primary disease caused by a process of elevated endolymphatic pressure, but it is also important to keep in mind other causes of endolymphatic hydrops like metabolic and hormonal disturbances, head traumas, and some infections like tertiary syphilis of the inner ear and Cogan’s syndrome [3,4]; Autoimmune conditions, such as rheumatoid arthritis, may lead to an inflammatory process within the inner ear. An autoimmune cause was postulated after and there was a close relation with the elevated level of thyroid autoantibodies in patients with MD [5,6].

Medical treatment of MD is directed according to the clinical condition of each patient. Changing Lifestyle and dietary restrictions are usually the first recommendation. Avoiding triggering materials like salt, chocolate and caffeine could be the only needed treatment. Smoking cessation also is an important step. Symptomatic drugs like meclizine, droperidol, prochlorperazine, diazepam, lorazepam and alprazolam are only masker for vertigo. These masking medications are vestibulo-suppressants and work by decreasing the brain’s response to signals from the vestibule of the inner ear. Steroids shown to be useful in treating endolymphatic hydrops because of the effect of the anti-inflammatory process. Steroids can be helpful in controlling vertigo, tinnitus, and improving the hearing deficit, probably by decreasing endolymphatic pressure; they can be given by the oral route, intramuscularly, or intra-tympanically [7] Histamine agonists like betahistine are used in different parts of the world for treating of MD. the mechanism of action of betahistine has not been totally agreed, but it is known that it can rise the flow of the circulation of the cochlear stria vascularis [8] or by the inhibitory effect on the vestibular nuclei activity [9].

Despite of wide range of medications used in MD, this study focused on the use of intra-tympanic dexamethasone injections and compared the outcome of the patients with single versus multiple injections.

Aim of the study: Is to identify the successfulness of treatment of MD by multi-session intra-tympanic dexamethasone injection compared to the single-session method.

Interventional prospective study performed in a specialized neuro-otology center from the period of January 2020 to August 2021; the study was approved by the committee with approval no 641. In this study 70 cases of definite MD treated by 4 sessions of intra-tympanic injection of 4 mg in 1 ml of dexamethasone with an interval of one week between each session; all the patients are informed to be part of a study and a signed acceptance latter of participation in this study and acceptance of taking 4 intra-tympanic cortisone injections was signed by each of them; observation of those patients for a period of 6 months for the occurrence of any attack of vertigo was done by regular visits each month; a patient who did not visited the socialized center for follow-up was called by the center supporting staff to report any occurrence of attack of vertigo. The study group was compared to a control group of 66 cases of age matched patients with definite MD treated by the traditional single intratympanic injection of 4 mg in 1 ml of dexamethasone; the control group selected from patients refused treatment by multiple intra-tympanic injections and were also informed to be part of a study and also observed by the same method for any occurrence of any attack of vertigo for 6 months.

Patients treated by other methods like oral betahistine tablets or diuretics and intra-tympanic gentamycin ware excluded from the study.

All patients included in the study and control groups were instructed to avoid salt in food and avoidance of coffee and other caffeine containing materials and encouraged to drink water excessively during treatment time; these advices were repeated during the fellow up period as well; no any other medications for MD were given to those patients in the study and control groups. 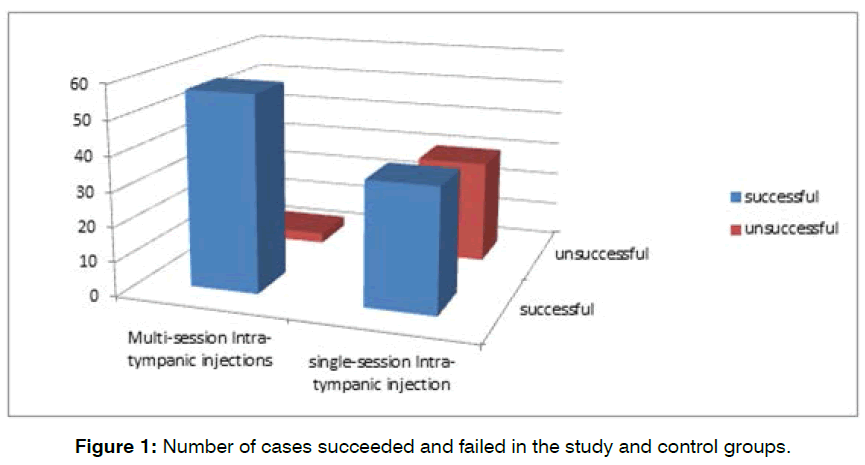 Figure 1: Number of cases succeeded and failed in the study and control groups.

Statistical analysis by Chi square showing a highly significant difference between the study and the control group as the resultant P value was less than 0.01

Treatment strategy for MD is not fully agreed globally and there is a big debate whether the patient should be kept on an increasing doses of medical treatment according to the response to treatment or to shift or even to start with more aggressive intra-tympanic therapies; Barrette LX et al. [10] reported that MD remains a challenging entity to treat and De Luca P [11] reported that There are many treatment modalities of MD, but none is considered as a totally effective by the scientific community. Betahistine is an oral medication that used globally but recently conducted multicenter study suggested that two different doses (48 and 144 mg/day) of betahistine did not show any difference from placebo regarding the incidence of attacks and vestibular function [12] and the study of Franziska Lezius et al. [13] suggested higher doses that can reach 480 mg daily may be required which can leads to development of gastric side effects in some patients and is contraindicated in patients with peptic ulcer diseases.

Some authors suggested intra-tympanic cortisone as a first line treatment of MD; D.S. Deenadayal et al. [14] concluded in their study that intra-tympanic steroid injection significantly controls vertigo, tinnitus and improves hearing in MD with minimal complications. Hence, it can be tried as a first line treatment for patients with MD. Study of Hiroshi Okuda et al. [15] reported that intra-tympanic dexamethasone injection of 3.3 mg/mL can significantly improve symptoms of MD in limited percentage of patients suffering from this disease; as it was reported in 56.3% of the patient included in the study; recent studies [16-18] showed better response percentages in patients received higher doses of intra-tympanic dexamethasone (12 mg/ml). However, this dose is not always available commercially in some countries and it is not available in the country where this study was conducted; alternatively the author suggest repeated doses of the conventional dose of dexamethasone (4mg/ ml injection) as dexamethasone seems to be safe and with minimal side effects when injected by the intratympanic method [19].