Vestibular schwannomas (VS), also known as acoustic neuromas, are benign neoplasms originating from the Schwann cells of the eighth cranial nerve and present most frequently in subjects between 30 and 60 years [1]. VS have a prevalence of 1.4-2.1 in 10.000 people [2,3], and represent 5% to 10% of all intracranial tumors, and 80% to 90% of neoplasms of the cerebellopontine angle [4].

VS presenting symptoms usually include slowly progressive sensorineural hearing loss, fullness and tinnitus associated to vestibular disorders in 16-70% of cases; balance disorders can present with acute rotatory vertigo and/or dizziness [5,6]. Medical history, clinical examination and routine audio-vestibular examination alone cannot diagnose VS; diagnosis must be confirmed by high-resolution Magnetic Resonance Imaging (MRI) with intravenous gadolinium-based contrast [7]. Along with imaging technology improvements, the number of VS diagnosis has increased including smaller schwannomas previously overlooked [8].

The presenting symptoms of VS can also be found in other inner ear disorders such as endolymphatic hydrops (ELH); nevertheless, inner ear disorders may be present in patients with VS [9]. ELH is a disorder of the inner ear characterized by episodic attacks of vertigo, tinnitus, fluctuating hearing loss, ear fullness, and progressive loss of the audio-vestibular function [10].

Differential diagnosis plays a central role for a correct diagnostic and therapeutic management of VS patients; at the same time, it is important not to overlook other concomitant inner ear disorders [10].

In this paper, we describe the case of a patient with fluctuating hearing loss, tinnitus and acute rotatory vertigo episodes, who presented an intrameatal vestibular schwannoma and a symptomatology suggestive for ipsilateral endolymphatic hydrops.

A 67-year-old man was admitted to the Otolaryngology Department of the Policlinico Umberto I, Sapienza University of Rome in December 2013 with a three-year history of fluctuating hearing loss in the left ear and vertigo attacks lasting 2 to 6 hours associated to intense nausea and vomiting (4-6 episodes/year). Last episode occurred one month before admission.

The patient had a normal otoscopy; PTA showed a mild sensorineural hearing loss in the right ear with an average auditory threshold of 37.50 dB and a moderate sensorineural hearing loss in the left ear with an average threshold of 61.25 dB, more evident for mid-low frequencies. Weber test lateralized to the right at all frequencies. Speech Discrimination was in accordance with PTA; no alterations were found at ABR (Table 1); DPOAE amplitudes were reduced bilaterally with a significant reduction in the left ear compared to the contralateral ear (Figure 1). No spontaneous or gazeevoked nystagmus was found at IR-VNG; left hyporeflexia was observed at the caloric test. The first c-VEMP complex of biphasic wave p13-n23 and the n10 response of the o-VEMP to Bone Conducted Vibration and Air Conducted Sound were normally evoked bilaterally.

Table 1. Auditory Brainstem Response recording in our patient. No alterations can be seen for waveforms and latencies in both sides. 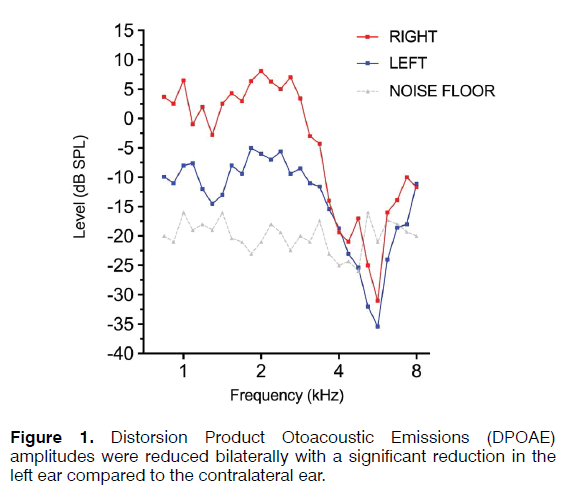 Figure 1: Distorsion Product Otoacoustic Emissions (DPOAE) amplitudes were reduced bilaterally with a significant reduction in the left ear compared to the contralateral ear.

Audiological examination was followed by a conventional MRI of the brain with gadolinium-based contrast agent performed in the axial, sagittal and coronal planes focusing on the eight cranial nerve and cerebellopontine angle; heavily T2-weighted sequences revealed an intrameatal mass with cystic and solid components measuring approximately 7 x 4 mm on the left side consistent with vestibular schwannoma (Figure 2). 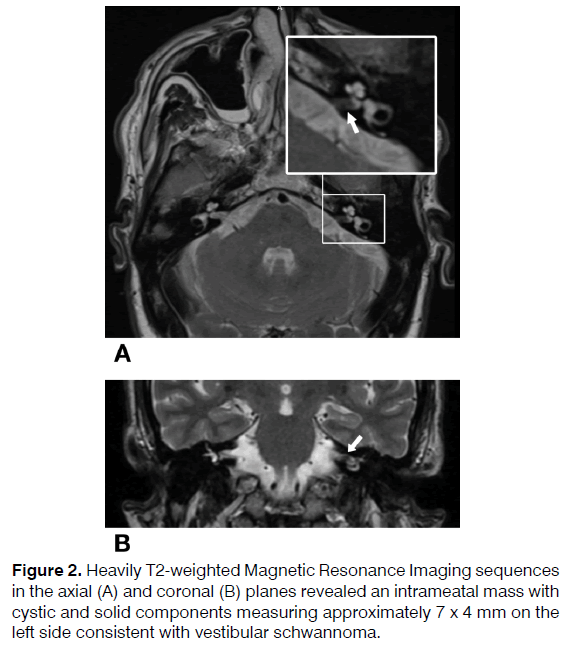 Figure 2: Heavily T2-weighted Magnetic Resonance Imaging sequences in the axial (A) and coronal (B) planes revealed an intrameatal mass with cystic and solid components measuring approximately 7 x 4 mm on the left side consistent with vestibular schwannoma.

During the following 30 months, the patient experienced fluctuating hearing loss in the left ear associated to acute vertigo attacks monitored over time with PTA and IR-VNG; exams documented a fluctuation of hearing threshold in the mid-low frequency range in the left ear with average auditory threshold for frequencies 500-4000 Hz of 53.75 dB in March 2013, 32.5 dB in February 2014, 45.75 in March 2015 and 61.25 in May 2016 (Figure 3). When recorded during the vertigo attack, IR-VNG showed a spontaneous left beating nystagmus. The patient also reported the onset of a stable high-pitch tinnitus in the left ear one year after initial admission to our unit. 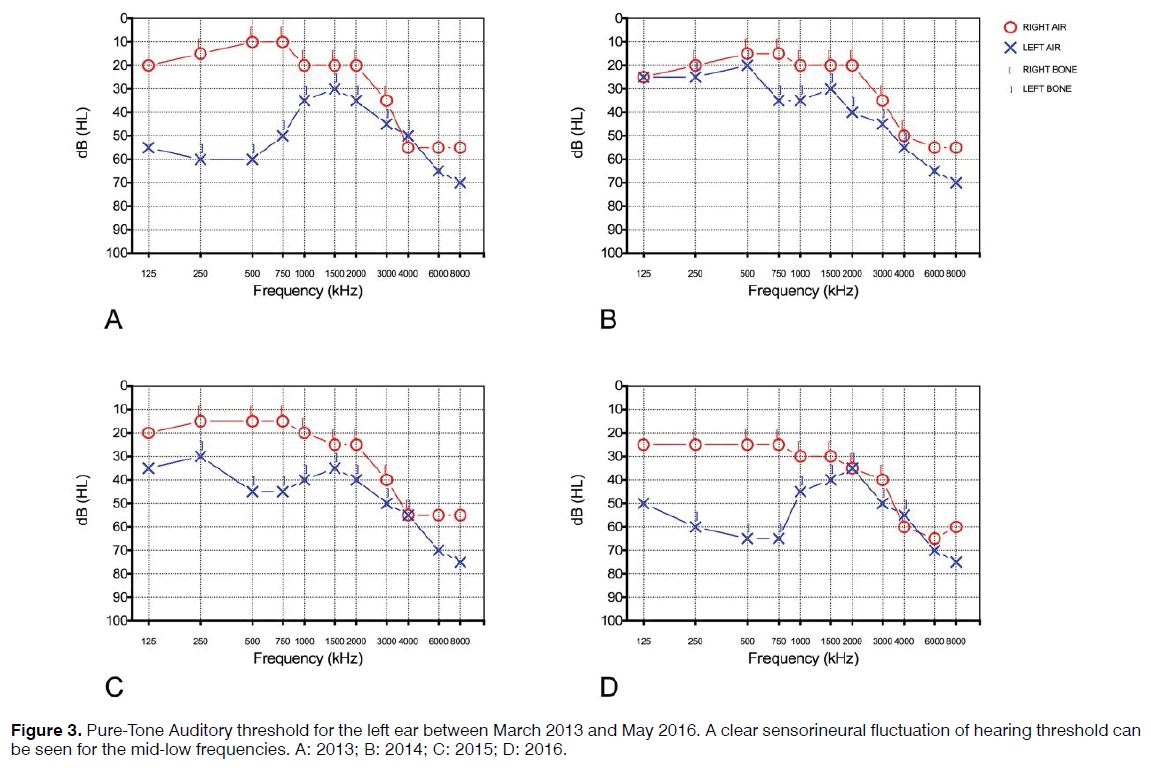 The results of the audiological evaluation during follow up led towards a diagnosis of left VS associated to an ipsilateral ELH. Diagnosis of ELH was posed according to AAO-HNS Committee on Hearing and Equilibrium classification criteria [11,12] but was not confirmed radiologically due to unavailability of 3-Tesla MRI. Hydrops was treated pharmacologically with betahistine-dihydrochloride during crisis and long-term cinnarizine plus chlorthalidone associated to low sodium diet following our internal management protocol; VS was monitored over time with a wait and scan protocol through conventional MRI.

The presentation of simultaneous VS and ELH on the same side in the same patient is uncommon and has seldom been described in the literature [13-16]. Although the two pathologies are most probably of independent origin and should be considered separate entities, presenting and ongoing symptoms may overlap and may cause an incorrect treatment of the cochlear disorder (i.e. misdiagnosis of the endolymphatic hydrops), a potential delay in VS diagnosis (i.e. postponing the execution of a MRI) or a potential misinterpretation of VS evolution (i.e. attributing symptoms to VS growth instead of inner ear dysfunction, or vice-versa) [13,16-19].

In such cases, it is always puzzling to attribute the vestibular symptoms to the inner ear or to the retrocochlear condition. Several studies discussed the origin (retrocochlear or cochlear) of audio-vestibular symptoms in patients with VS, suggesting that vertigo and hearing loss may also have a peripheral origin, possibly induced by tumor-related vascular alterations of the inner ear, rather than being exclusively linked to a direct pressure of the tumor on the vestibulocochlear nerves [20,21]. Roosli et al studied temporal bones from 32 patients with unilateral VS, finding significantly more hair cell loss, cochlear neuronal loss and decreased pure tone average when compared with the opposite ear; however, tumor size, distance from the cochlea, and nerve of origin did not correlate with structural changes found in the cochlea [20].

Due to the varying and fluctuating symptoms, the clinical diagnosis of ELH may be difficult [22]. The role of new imaging techniques is gaining importance in ELH diagnosis, since conventional MRI is unable to distinguish the endolymphatic from the perilymphatic compartments within the inner ear [23]. In the recent years, several efforts have been made to develop reliable imaging able to identify ELH; some inner ear imaging techniques enable visualizing morphological changes in the cochlea and the vestibulum in vivo [24]. Current research demonstrates the validity of Locally Enhanced Inner Ear MRI (LEIM) after intratympanic contrast agent application and 3-Tesla MRI performed with intravenous gadolinium with 3D-FLAIR sequences for the diagnosis and grading of ELH; these techniques have shown similar sensitivity to histopathological series in identifying ELH [25-27]. The degree of perilymphatic enhancement in 3-Tesla MRI also depend on the interval between the intravenous contrast administration and imaging. Research showed that a 4-hour delay results in greater contrast enhancement within the perilymph [28,29]. Jerin et al reported a case of a patient with VS and endolymphatic hydrops, in which ELH was revealed with the use of an inner ear LEIM MRI with an axial 3D Real-IR sequence; the authors recommended performing locally contrast-enhanced inner ear MRI in those cases in which an ELH is suspected [14]. In a study from Kentala and Pyykkö, the authors retrieved information on 127 patients with VS and 243 patients with ELH and found that 38% of the VS patients had the full triad of vertigo, hearing loss and tinnitus and vertigo mimicked that in ELH in 14% of cases [19]. In a recent study to verify whether vertigo in patients with VS correlates to vestibular endolymphatic hydrops, Naganawa et al studied 15 patients with unilateral VS using a noncontrast- enhanced 3D FLAIR MRI and reported vestibular hydrops in 4/15 cases; however, no significant correlation between vertigo and hydrops was found [15].

In our patient, the two pathological conditions coexist but are most probably unrelated. The full audiological and radiological protocol performed allowed to identify separately both cochlear and retrocochlear disorders, although the diagnosis of ELH was not confirmed by imaging due to unavailability of 3-Tesla MRI (the availability of 3-Tesla scanners is still limited in many hospitals) or, as suggested by some authors, electrocochleography [30]; consequently, ELH diagnosis was only based on symptoms reported by the patient over the years associated to the results of the auditory and vestibular evaluation performed initially and during follow up and to patient’s response to therapy.

Although current literature supports the notion of a peripheral origin of vertigo in patients with small vestibular schwannomas, it is always recommended in patients with VS to also investigate possible coexisting independent inner ear disorders such as ELH, especially when a fluctuation in audio-vestibular symptoms is documented. When available, a 3-Tesla MRI performed at 4 hours post-intravenous gadolinium with 3D-FLAIR sequences or a locally contrast-enhanced inner ear MRI to detect endolymphatic hydrops may be useful to confirm ELH. At the same time, as widely documented in the literature, it is always recommended performing gadolinium contrastenhanced MRI in patients with unilateral hearing loss and symptoms suggesting a peripheral origin to exclude retrocochlear lesions such as VS. Unfortunately, the need for a thorough neuro-otological work-up including MRI scanning can still be overlooked in the cases in which it appears to be a clear peripheral etiology for the hearing loss such as in endolymphatic hydrops.

This research received no specific grant from any funding agency, commercial or not-for-profit sectors.